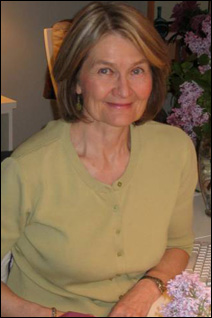 Margaret Hasse finally has a new book of poems out. This is the local literary equivalent of Patti Smith’s return from the land of silence. The alt-rocker disappeared for 15 years before returning to music, and Hasse, after publishing two acclaimed books of poetry and collecting numerous awards, including a fellowship from the National Endowment for the Arts, dropped off the face of the Twin Cities’ literary scene for 20 years.

You can probably guess what happened. Hint: It’s small and loud. Babies drowned out Smith, too. Somehow the demands of parenthood don’t interrupt male poets, but for Hasse, who adopted two boys within a three-year-period, raising children took most of the energy she once poured into poetry.

“Sometimes I was faithless to my poetry,” she admits. “I had the energy to keep a writing journal, but during those intense years, I didn’t feel like I had the energy to bring a poem to the point where it was ready to be shared. I was not at peace about it, either. I was very fulfilled as a parent, but I never felt like I was doing what I needed to be doing if I wasn’t working on a poem.”

Hasse was also working as a grant writer and consultant to nonprofit arts organizations. After all, poetry never was going to pay the bills. But that didn’t stop her from dipping her toes into the writing world that lay just out of reach. She taught occasional writing classes, published a lone poem here or there, and heard and bought local poetry. “The poetry community isn’t just about writers, it also includes the readers,” she says. “Poetry is a conversation.”

Hasse moved to the Twin Cities in the 1970s, to take part in a larger literary landscape. Many of her early poems are set in her rural South Dakota hometown; she never believed that poetry had to be about big topics. “I remember reading a poem by Robert Bly in which he wrote about ‘South Dakota roads that feel around like a hand in the dark,’ ” she recalls.

Two movements converged
In the Twin Cities, she joined an exploding literary scene, and found other women poets. “When I was in high school, in the late ’60s, most writers were men,” she says. “In the ’70s, though, the literary movement and the women’s movement seemed to converge. I really feel like there was a renaissance happening at that time.” Hasse became part of a community that included Patricia Kirkpatrick, Roseann Lloyd, Deborah Keenan (who just published a retrospective), Patricia Hampl (who became a memoirist), Kate Green (who has become a mystery writer) and Mary Logue.

“I recently learned an interesting stat: 40 years ago 13 percent of the pages in literary magazines pages were women. Now that’s up to 40 percent,” she says. Hasse notes that the writing community has changed in other ways, too. “It was such a small community, and now it has just blossomed. Back then I knew everybody who was being published and reading, and it was very new and exciting. We had a few great reading series; the Loft got started in 1972. Now it’s branched off into so many directions. We have spoken word and poetry slams, more visible writers of color. It’s still hard to get published, but there are broadsheets and co-ops, self-publishing and the Internet, new magazines and presses, Rain Taxi and the What Light poetry contest. All of those things are just great.”

But not as good as having a new book. “Not to be a fuddy-duddy about it, but I think for many people of my era, it doesn’t feel real unless there’s a book in your hand,” she says. The new book, “Milk and Tides,” is out now on Nodin Press. (It’s available now at independent bookstores, including Micawber’s, and will be for sale on Amazon.com June 1.)

Domestic themes
The poems hint at those quiet 20 years. Many of them center on the domestic realm; building a family through adoption, raising children of color in a white community, and the life changes that happen along the way. “Readers have told me they like that I write about these kinds of things. These are love poems to a family and the things that happen in that small sphere, yet I hope they speak to other people, too.”

Publishing intimate poems about family life calls to mind a current controversy in the online world: Is it OK to write about one’s children when the whole world can read it? Hasse’s sons say it is — sort of. They appear in these poems with fake names. “I gave them some names to choose from, limited because I needed to work with certain rhythms. I said, ‘Why don’t we create a little circle of anonymity around our lives?’ “

And then she wanted to read the poems at the boys’ schools. “They used to like to have me visit their schools as a poet, but in junior high they started to not like it. I was with the Poets Out Loud program, and I asked my older son how he felt about me going to his school and reading a poem about him, and he said, ‘Oh, it’s OK — if you give me $50.’ Then he said, ‘No, it’s OK. Just don’t come to my class.’ ”