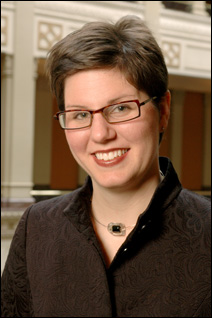 Here’s a factual statement that sounds vaguely controversial: Kathleen van Bergen is the first woman to serve as executive director of the Schubert Club in its 126-year history. She’s just completing her second month on the job.

Couple that with the fact that the Schubert Club, the Twin Cities area’s oldest performing-arts organization, was called the “Ladies Musicale” when it was organized in 1882 by St. Paul women who wanted to promote culture in a community self-conscious about its rough-and-tumble frontier reputation. Moreover, it wasn’t until 1913 before men were first admitted to the organization — and then only as non-voting members.

Ah, but you’ve got to know the context.

The fact is, van Bergen is only the second executive director in the organization’s history. She succeeds the legendary Bruce Carlson who, by the way, was the Schubert Club’s first paid male employee when he was hired as business manager in 1968.

Under his leadership, the Schubert Club carried on its distinguished history of bringing great recitalists to the Twin Cities, which had included such luminaries as Percy Grainger, Jascha Heifetz, Vladimir Horowitz, Arthur Rubinstein and many others in the years before Carlson was hired. That tradition continued, along with a commissioning program, artist-in-residence programs and museum collecting, among other things.

Carlson, a lawyer turned arts impresario, was 66 when he died of leukemia in 2006. The loss deeply saddened the local arts community, and some fans wondered if the Schubert Club would decline without him.

“There was a concern that the funding would fall off, but we did very well,” said Rebecca Klein, the organization’s development director. “Our donors stayed with us and so did our supporters.

“I suppose it’s a legacy of Bruce’s good will, but it also reflects our history,” she added. “We’ve operated for 125 years without a deficit and it’s not because we’re so wealthy. We’re very conscious of our budget. We don’t overspend and try to deliver a lot.”

The Schubert Club spent nearly two years looking for the right executive before they offered the job to van Bergen, 31, who had been vice president for artistic planning at the Philadelphia Orchestra. Since starting on March 10, she said she’s been observing the local scene carefully and talking over ideas about the future.

Stable foundation
“One of the luxuries of inheriting the Schubert Club is its stability,” she said. “We build and respect traditions even though we’re having a lot of discussions about the directions we want to take. But my goal is to be respectful of what is working beautifully and build on those procedures.”

Some statistics: The Schubert Club’s annual budget is $1.7 million, half of which comes from individual donations, foundation grants and money from the Minnesota State Arts Board. A quarter of the budget is paid through a regular drawdown of the organization’s $13 million endowment, and the remaining quarter comes from earned income — primarily ticket sales to the International Artist Series presented at the Ordway Center for the Performing Arts.

About the Ordway series: It’s sold almost entirely by subscription. The series has nearly 1,800 subscribers, representing 94 percent of the Ordway’s seating capacity.

The Schubert Club, which has its headquarters in St. Paul’s Landmark Center — a former federal courthouse — also sponsors regular free concerts in one of Landmark’s old courtrooms. Its annual scholarship competition for young musicians has been going on since 1922, and it maintains a museum of musical instruments and composer manuscripts. Its keyboard collection is particularly well-regarded.

The Schubert Club has transformed itself into a year-round operation. This summer’s big event, for example, is the Summer Song Festival, June 9-14, which includes everything from a program on Minnesota-based songs to a tribute to Dominick Argento, whose “From the Diary of Virginia Woolf,” commissioned by the Schubert Club, won the Pulitzer Prize in 1975.

Though she’s just the second executive director, van Bergen fits a tradition of personal transformation that was started by Carlson, whose love of music seduced him away from a career in the business and legal worlds. By contrast, van Bergen started out as a musician: She studied violin at Eastman School of Music and was a member of the Rochester (New York) Philharmonic and the Civic Orchestra of Chicago before deciding that arts administration was the direction she wanted to pursue as a career.

That led to another degree from Dartmouth’s Tuck School of Business and an administrative job with the St. Louis Symphony before her last job in Philadelphia.

She still plays, “but only with a bottle of wine, some friends and maybe a string quartet.”

She declined to be specific about any plans for the Schubert Club — with one exception.

“One of our goals is to raise the profile of the Schubert Club,” van Bergen said. “It’s been peacefully adored here. It needs to be touted, not only here, but nationally and internationally.”