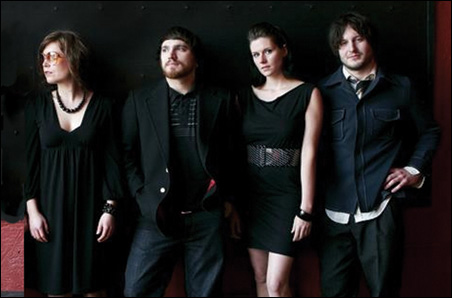 Courtesy of Parts For All Makes
The band, from left to right: Laura Meloy, Jeff Marcovis, Katie Marshall and Jacob Grun. Not pictured: bassist Scott McVeigh.

Time spent in a recording studio can often be more dull than electrifying, more repetitious than creative and more expensive than not. These loose truisms can be reversed, of course, though the hard reality about the dollar is undoubtedly the most difficult one to get around.

Difficult, but not impossible, especially when members of a band own a recording studio. That’s the case with Parts For All Makes, a Minneapolis group releasing its first full-length CD, “These Arms Are Not Forever,” at 9 p.m. this Friday (May 16) at the Uptown Bar, 3018 Hennepin Ave., in Minneapolis.

You can hear “You Space Me” and “I Miss You,” from the new CD, on the band’s MySpace page.

Upon closer examination
Katie Marshall shares lead singing and songwriting duties and also plays guitar and keyboards for the band.

“I feel like we’re moving in a direction where we’re doing a lot less of the driving thunk-thunk-thunk kind of thing. I don’t know how you can say that in any kind of articulate way,” she says, laughing. “I hesitate to say that it’s more melodic, but there are definitely a lot more vocals and a lot more backing vocals kinds of things happening on the new record.”

She says the group began the album project two years ago.

“It’s been a pretty long process,” she says. “We just finished it up about a month ago. We recorded it at the Sound Gallery.”

“We have our own run of the Sound Gallery recording studio, which is kind of nice,” she says.

Parts For All Makes also includes Laura Meloy on lead vocals, guitar and keyboards, as well as bassist Scott McVeigh.

Marshall says time in the studio allows the band to listen to itself closely.

“The hours get long, but it’s nice to kind of hear things a little bit better and realize that maybe that guitar line isn’t working best that way, even though we’ve been playing it that way live for a year,” she says with a laugh.

The hardest part of all that studio time is the repetition.

“For me as a vocalist, it’s hard to sing the same lines six or seven times and still have that passion in it,” she says.

“Usually what happens is that one of us will write a song kind of on our own and then she and I will get together and work out the kinks. If she needs help with the chorus or I need help with a verse, we kind of back each other up like that. And then we bring it to the boys.

“Then we all just kind of pound on it until it clicks.”

Inner space
“All of our songs are written by two females, so they’re usually about love or the lack thereof, or the loss of,” she says, including her “You Space Me.”

“That one, particularly, is about a standard breakup,” she says. “Well, loosely based on a real breakup.”

The 26-year-old hesitates when asked if she could’ve written the ringing, chiming song five years ago when she was studying music business at McNally Smith College of Music in St. Paul.

“I don’t know,” she says. “That’s a tough question. We’re kind of evolving. Well, yeah, maybe. Honestly, I’m more mature than I was five years ago, so lyrically, I don’t know that I would have been in a place to see things the way that I see them now.”

Marshall is employed there now in the admissions office.

“I give tours of the school, meet with rock ‘n’ roll kids and their terrified parents who are thinking of sending their kids into a life of starving artistry.”

She says she learned about marketing and copyright law, among other things at McNally Smith, but acknowledges the school can’t teach some things.

Parts For All Makes celebrates the release of its new CD on Friday at the Uptown Bar and then plays Saturday night (May 17) at the Triple Rock Social Club, 629 Cedar Ave. S., Minneapolis as part of the England Swings show featuring local bands playing British rock.

The Triple Rock show begins at 7 p.m., featuring the Coyotes, Maudlin, Aviette, Strangelights, So It Goes, The Wag, The Invincible Kids and The Nice Outfit (from Milwaukee). Admission is $7.

Marshall says Parts For All Makes plans to cover Futureheads, the Beatles (“I Dig A Pony”) and the Eurhythmics.

The fifth annual Rock for Pussy benefit for the Minnesota Valley Humane Society (the event also serves as a tribute to David Bowie) is this Friday (May 16) at 8 p.m. at First Avenue, 701 First Ave. N., Minneapolis.