Joe Chvala explains the work of Flying Foot Forum in this video. (Photo from “French Twist” by George Byron Griffiths)

Dance fans could go crazy for tap in the next couple of weeks, and several choreographers in the Twin Cities hope they will. A number of shows featuring innovative tap dance are coming up — and a particularly crazy one runs through this weekend — in a variety of venues to suit every sensibility.

First, the Flying Foot Forum‘s new show, “French Twist,” continues at the Guthrie, where the Dowling Studio has been magically transformed into a Parisian street scene/cabaret. “French Twist” may be the silliest show I’ve ever seen, with the most hyper-kinetic tap dancing, mouth percussion, verbal pyrotechnics and costume changes ever on the planet. In two words: highly entertaining.

The percussionist Peter O’Gorman, who often performs with Chvala and Karla Grotting (the FFF mainstays), is outstanding in this production: as a silent chef who communicates, and teaches others to communicate, through the swish and ching of kitchen utensils on bowls and cups, as a sommelier scatting through a wine description, or when he’s slap dancing with wild man Chvala in a one-upmanship duet.

This is percussive dance taken into another realm. While Chvala and Grotting are the tap experts, they’ve expanded the percussive potential of the body in eye-opening ways by incorporating O’Gorman into their routines. As the show veers from kitchen to cabaret to faux-Louis XIV foppery, the zaniness gets ever-zanier, but is anchored by flying feet planted solidly — if in intricate rhythm — on the ground.

On Thursday, a rising star in the local tap scene, Kaleena Miller, takes to the boards again as the host of “The Cutting Board” at the 331 Club in Northeast Minneapolis. Miller first made joyful noise as the only woman in 10Foot5 (now often known as Buckets & Tap Shoes), those madmen of divot-exploding, stick-splitting, bucket drumming and tap dancing. In addition to still dancing with them, she now creates her own choreography and stages her own tap interventions. 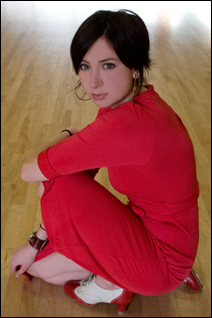 About her history as a tapper, Miller told me, “I grew up taking from very classical tap dancers. But when I started dancing with these guys [Rick and Andy Ausland, the founders of 10Foot5], I was thrown into this powerful hard-hitting tap form that was hard for me. In fact, it scared the crap out of me initially. I had to get better in order to keep up with them.”

She wanted to keep up, she added, because “whatever challenge is put in front of me, I have to do it, especially within tap dance art form. If that’s tap dancing in heels, yes, I’m going to do it. Tapping in weird time signatures? Yes. Tapping with the boys, yes, I’m going do that, too. It’s all about finding personal goals and meeting them.”

Last July, she accomplished all of that in her show titled “Flow” at the Ritz Theater. Demure and dynamic, she danced a rhythmically filigreed solo wearing silver high-heeled tap shoes. She performed a lovely duet with Ricci Milan (also an original member of 10Foot5) in which her leggy extroverted energy was an engaging contrast to Milan’s more internally wound enthusiasm.

Check out Kaleena Miller and her cohorts stepping it up in this video.

During this week’s edition of “The Cutting Board,” Miller will be joined by Milan and whoever shows up, tap shoes in hand, with live music by Robert Bell. Then on May 25, which is National Tap Dance Day, Miller, Milan and another 10Foot5 alum, Nick Bowman — the three call themselves Rhythmic Circus — will be one of the professional tap-dance groups performing from noon to 2 p.m. in the rotunda at Mall of America. The event was organized by another local tap group, Keane Sense of Rhythm, which will also perform.

So, what’s so special about tap dance? “Tap dance is the one dance form that brings together music and dance, because you’re creating music as you’re dancing,” she says. “You’re the music and the dancer. Or, maybe I just like to make noise!

What: National Tap Dance Day Celebration
When: noon-4 p.m., Sunday, May 25
Where: Mall of America Rotunda, Bloomington
How much: Free