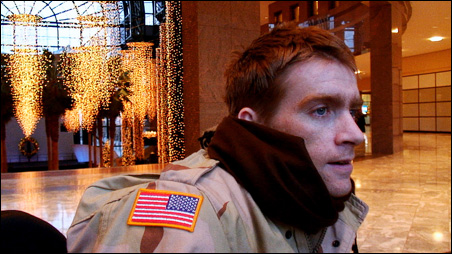 Take the “show” away from “talk show” and you have, simply, “talk” — which telegenic muckraker Phil Donahue does quite capably by phone from New York.

“We know there are casualties in Iraq,” says the chat-a-thon vet, his low voice sounding aptly grave. “But you can’t feel them if you don’t see them. And we aren’t seeing them.”

Donahue isn’t visible in “Body of War,” the documentary film he made with co-director Ellen Spiro as a way to reveal the casualties missing in action from TV news coverage. The film opens today (May 16) at Lagoon Cinema. But the force of his personality pervades the film, which dares to focus on the antiwar activities of U.S. veterans now home from Iraq, and wouldn’t likely have been made without his degree of commercial clout.

Donahue says that “every mainstream American distributor” politely passed on purchasing the independent “Body of War,” and, given the unofficial standards and practices of Big Media’s Iraq coverage, it isn’t hard to believe him.

What makes “Body of War” unique within the short but distinguished history of Iraq War documentaries is — as its title makes plain — the film’s measure of the costs of war in physical terms.

The movie’s war hero — or antiwar hero, rather — is Tomas Young, an Army soldier whose spinal injury in Iraq left him physically paralyzed from the chest down, and politically active from the neck up.

“Tomas wanted to put himself out there,” says Donahue, clearly admiring of his subject. “He wanted young people of enlistment or draft age to see his daily challenges. He doesn’t want them to make the impetuous decision [to enlist] that he did.”

The Ron Kovic of our time
As a harrowing portrait of a veteran’s physical and political transformation, “Body of War” bids not only to be the “Born on the Fourth of July” of Iraq War docs, but also to transform Young — who enlisted two days after 9/11 and joined the protest movement three years later — into the Ron Kovic of our time.

Like Kovic, Young isn’t shy about pointing the finger at the U.S. government. Neither is “Body of War,” whose brilliantly blunt editing weds the sound of senatorial approval (“Aye! “Aye!”) to the image of Young’s disability. 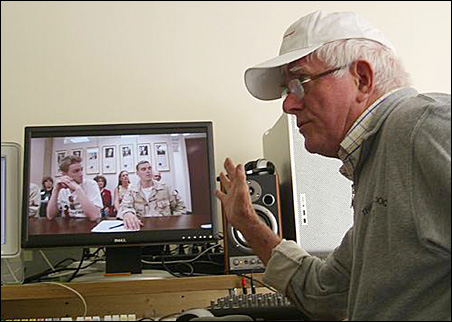 “Without our references to the [2003] Senate vote,” Donahue says, “the film might’ve been a ‘Dear lad, so sad’ kind of movie. And Tomas didn’t want that. We all wanted to make a political statement.”

Not that only a single statement is issued in “Body of War.” There’s a 12-step program for activism — call it Apathetics Anonymous, perhaps — available at the film’s website (from the “Take Action” link). Moreover, implicit in the film’s fierce objection to a constitutionally illegitimate war is an equally strong protest of the media’s manufactured consent to what Donahue calls “the most sanitized war of my lifetime.”

“The president said, ‘You can’t take pictures of [veterans’] coffins,’ and the entire press corps — every major metropolitan newspaper in the country — said, ‘OK.’ “

Donahue, who long hosted “The Phil Donahue Show” on CBS, believes there’s another war being waged in this election year — that for the re-democratization of journalism.

Donahue is preparing to take the battle to Minneapolis in early June, when he’ll stump for author and professor Robert W. McChesney’s National Conference for Media Reform (June 6-8), whose platform holds that corporate media has run roughshod over the free exchange of ideas — or opinions, anyway — that abounds online.

“You can’t deny that this is a huge evolutionary moment in the history of intellectual property rights, of the flow of information, of entertainment and the arts — and science, too,” Donahue says. “So let’s celebrate it. And let’s admit that we either believe in free speech or we don’t.”