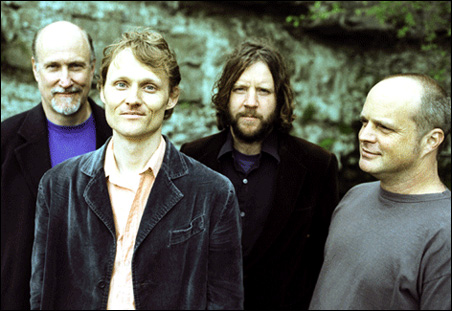 Imagine an outdoor public festival where you can go early, leave your lawn chair, wander off for brunch or shopping, and return hours later to find your chair still there — not moved, stolen, or shot full of holes. On a lush green lawn where people pick up their trash.

That really happens at the annual Iowa City Jazz Festival, held each year over the Fourth of July weekend. We went in 2006 and loved it. The Bad Plus played, pianist Geoff Keezer tried out some new rhythms he had picked up in Peru, saxophonist Jaleel Shaw performed with the Mingus Dynasty, and it was all good.

Free jazz in the fresh air and tasty fair food besides.

Before heading home, we drove through the city and saw some of the damage caused two months earlier by a severe tornado. Buildings and homes were smashed and trees downed in a path of destruction 3 1/2 miles long.

This year, of course, Iowa City’s problem is not wind but water. The recent flood, so devastating it is being called the 500-year flood, engulfed the University of Iowa’s arts campus, forced the evacuation of hundreds of nearby homes, and left a wake of mud and misery.

As recently as June 18 the Iowa City Press-Citizen reported that the festival was up in the air. By June 19 it was officially a go.

The show goes on
“It was never canceled,” says Mary Frieden, executive director of the City of Iowa City’s Summer of the Arts, which manages the jazz festival. “I think there was some confusion because some other area festivals were canceled or postponed.” The SotA website trumpets “Let the music play!” and promises that “all entertainment will run as scheduled for July 4-6.”

As is usual for this well-established festival, the entertainment is first-rate and musically diverse. This year’s main stage headliners include Medeski Martin & Wood, the John Scofield Trio and the ScoHorns, and the Joshua Redman Trio.

Festival chair Jerry Suls is pleased with this year’s lineup. “Medeski Martin & Wood is a jazz jam band,” he says, “and I believe that a lot of different folks are going to get into that. Scofield is known for putting together traditional mainstream jazz and funky beats, and his horn section will complement all of that. Redman’s acoustic mainstream jazz will appeal to a lot of people. And Bonerama has a lot of fans in Iowa.”

The Iowa City Jazz Festival was founded in 1991 as a small local gathering of jazz aficionados. Eighteen years later it’s a big deal, drawing an average annual audience of more than 25,000. Admission has always been free, so all kinds of people show up: students on bicycles, families with babies, out-of-towners who come for the music and the ambience.

Stroll the Iowa Avenue Literary Walk between Clinton and Gilbert streets, look down, and you’re reminded that Iowa City is home to the Iowa City Writers’ Workshop. The names of famous authors who spent time there — Kurt Vonnegut, Raymond Carver, Flannery O’Connor, Rita Dove — are underfoot on bronze panels embedded in the sidewalk. 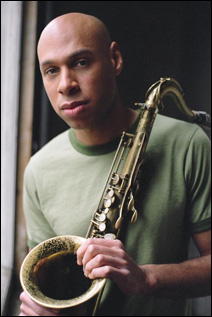 The arts campus is to the west of the Iowa River, on lower ground. The festival site is east of the river in a part of the university that remained high and dry. Called the “pentacrest” for the five buildings located there, including the historic Old Capitol with its gleaming golden dome, it is adjacent to the city’s downtown business district.

“The main hub of downtown is up on a big hill,” Frieden explains. “Downtown Iowa City is open for business, untouched by the flood.”

What about getting there? “Most of the major roads have opened back up,” Frieden says. The North Dubuque Street exit off I-80 has been underwater and will likely remain closed. As the festival draws near, driving directions and updated information about roads and exits will be posted on the SotA website.

Frieden believes this year’s jazz festival will not only be “a fantastic weekend full of jazz” but also a healing event. “People will be able to relax and have fun for a few hours and not think about what might be happening at their home.”

Although the festival is free, financial donations are welcome. This year, 10 percent of all donations received will be donated to the United Way of Johnson County Flood Relief Fund. “Our board of directors made that decision knowing it’s not just us, but people coming to the festival have been affected,” Frieden says. “We want them to know we care for them and they are in our hearts and minds.”

I can’t attend the festival this year, which I regret, but friends from Minneapolis and Northfield will be there. If you go, be sure to bring your lawn chair. “First come, first to get a great seat on the lawn,” Frieden says. “And the lawn looks really good.”

What: The Toyota-Scion of Iowa City Jazz Festival
Where: Downtown Iowa City
When: Friday-Sunday, July 4-6. The music starts at 4:30 p.m. on Friday, 2 p.m. on Saturday, and 2 p.m. on Sunday; the final performance (Joshua Redman Trio) begins at 8 p.m. on Sunday. See the schedule here.
How much: Free

Twin Cities Jazz Festival: Our own jazz fest wraps up with a jam-packed weekend of free music. Peavey Plaza headliners include Tony Monaco and the Heatin’ System in a tribute to the late Jack McDuff, the Amina Figarova Sextet and Charmaine Neville. A stage co-sponsored by MacPhail Center for Music and the Dakota Foundation for Jazz Education (of which I am a board member) will feature music by students, faculty and the Jazz Vocalists of Minnesota. Stop by at 6:30 or 7:30 p.m. this Saturday to hear the final performances of this year’s Dakota Combo led by trumpeter and composer Kelly Rossum. Download a schedule at the festival’s website.

Jazz Festival Jams: Stay up late on Friday, June 27, Saturday, June 28, or both, when festival stars will relax and unwind by playing even more music. Friday’s jam is at the Dakota and starts around 11:30 ($5). Saturday’s is at the Millennium Hotel and starts when it starts.

The E Family: Pete Escovedo is a Latin/contemporary/smooth jazz percussionist who passed on his love of the congas, bongos and timbales to his daughter Sheila and son Juan. Sheila grew up to play drums for Prince; Juan leads his own orchestra. I haven’t been this excited about seeing a bunch of percussionists on the same stage since the Global Drum Project came to Orchestra Hall. The Dakota, Saturday, June 28 and Sunday, June 29, 7 p.m. and 9:30 p.m. ($55/$40).