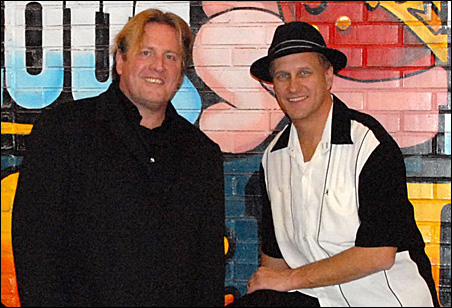 Photo by John McCally
Bluesman and festival organizer Paul Metsa, left, and music partner Sonny Earl will be in the lineup.

The fourth annual BBQ and Blues Festival at Peavey Plaza in downtown Minneapolis this Saturday will be focused on the more azure of the two kinds of music.

This year’s headliner at the free festival is Ron Thompson and His Resisters. Thompson’s probably best known for his years leading legendary John Lee Hooker’s formidable band back in the 1970s. Since then, he has not only fronted his own band, but also performed and recorded with the likes of Etta James, B.B. King, Big Mama Thornton, Lowell Fulson, Mick Fleetwood and others.

The California guitarist, keyboardist and vocalist is “really well-versed in a lot of different styles of blues,” Metsa says. “He’s really at the nexus of where blues and R&B blend.” 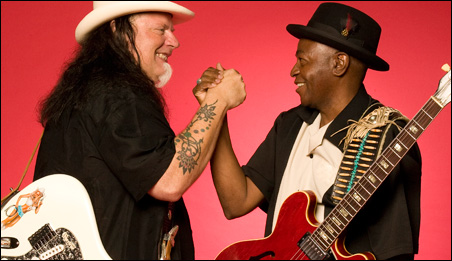 “Real powerful Texas roadhouse blues,” Metsa says of the duo and their band. (Here are Kubek and King at the 2007 North Atlantic Blues Festival.)

Instant karma
Metsa is music director at Famous Dave’s, the barbecue and blues club in Uptown Minneapolis sponsoring the festival. Metsa booked the dozen acts for the event, as he does for the club.

“My job is a joy,” he says. “My job is essentially giving money to musicians, which is ‘karmically’ a nice place to be. But I’ve also had the chance over the years to become friends with a lot of great musicians, whether it’s [legendary blues guitarist] Hubert Sumlin or Ron Thompson or Bnois King. It’s really an enjoyable way to live one’s life.”

One of the artists Metsa is most interested in seeing at this year’s blues fest is 81-year-old Big Jay McNeely.

The Los Angeles saxophonist made a name for himself in the postwar era with his wild honking and squawking style, as well as an outrageous stage act.

“He was one of the original saxophone honkers. You know, one of those guys who would walk the bar and go out into the street [while playing].”

McNeely is reported to have once played at a baseball game in LA’s Wrigley Field. He blasted his way through the stands filled with fans, then played his sax on his back all the way from home plate to first base. (Watch McNeely tear it up in his hometown here.)

He’s probably not quite up to those sorts of tricks these days, but there’s little reason to doubt he can still blow the house down.

The pairing will also be on the main stage. Over on the acoustic Juke Joint Stage, another superb longtime player has a chance to win new fans.

McIlwaine, reared by adoptive parents who were missionaries, grew up in Japan before she and her parents moved to Tennessee. Now living in Canada, the 62-year-old can drop a few big names on you: She’s played with Hooker, Jimi Hendrix and Howlin’ Wolf, among others. 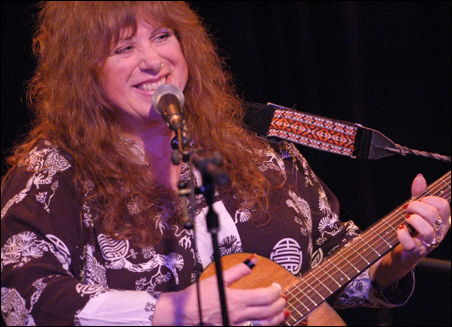 McIlwaine released a CD last year, “Mystic Bridge,” on which she covers Al Green’s “Take Me to the River” and Hooker’s dirty blues classic, “Crawling Kingsnake,” among others. (Hear her performing “Disposable Society” here.)

Knowing someone who knows someone
Somehow Metsa and his longtime musical partner, Sonny Earl, wrangled a spot on the bill.

Metsa laughs when asked how the duo managed to land the headline spot on the Juke Joint stage. “It is amazing,” he says. “I guess there are perks that come with the job.”

“Our blueprint and our inspiration is [harmonica player] Sonny Terry and [guitarist] Brownie McGhee,” Metsa says.

“Somebody described us as Sonny and Brownie with the energy of the White Stripes,” Metsa says. “I think that’s pretty apt. We’re not saddled by the complete [Sonny and Brownie] tradition. We are our own band within that tradition.”

Metsa says last year’s festival drew about 24,000 people to Peavey Plaza. This year, he says the main stage will be moved into the pool area, which will be drained. The acoustic stage will sit nearer Orchestra Hall, where the main stage was located for the first three years.

Blues guitarist Bernard Allison won’t be slinging it at this year’s fest at Peavey Plaza; he’ll be too busy celebrating the release of his “Chills and Thrills” CD at Trocaderos, 107 Third Ave. S., in Minneapolis on Saturday (June 7).

After the CD party, this son of the late, great Chicago-style bluesman Luther Allison hits the road for shows over the next few weeks: at Buddy Guy’s club in Chicago and dates in Ohio, Indiana, South Dakota, Canada, Iowa, Kansas, Montana, Wisconsin, New York, Pennsylvania and North Carolina. Like his father, he’s a road warrior.

Allison’s dad died in 1997 after a remarkable comeback from near obscurity in America (he had moved to France in 1980) that began when he signed with Chicago’s Alligator Records in the mid-1990s.

“I’m gonna try my best to pick up where he left off, but I can’t be Luther Allison, I can only be myself,” Bernard writes on his website. “In the beginning everyone expects me to be exactly like him, but we are two different musicians.”