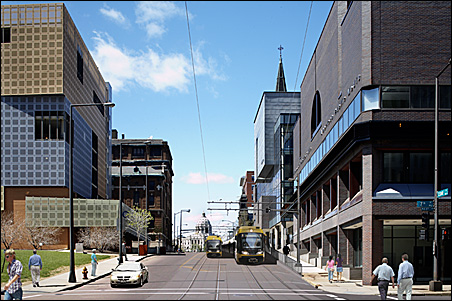 In an April 9 letter to St. Paul Mayor Chris Coleman, Kling wrote, “Since the veto will provide additional time, we are going to move ahead and much more aggressively oppose the Cedar Street route.” Kling wrote, “I think the fortunate side of the Governor’s veto is that it gives all parties some time to try for a better and more thoughtful approach.”

Kling and his lawyer have been trading letters for some time with city and other light rail officials over their concerns.

The MPR head has been up in arms for years over the designation of Cedar Street as the Central Corridor’s main artery through downtown St. Paul. He wants light rail off Cedar. And Bill Kling has a long track record of getting what he wants, though light rail might prove too formidable an opponent. (Full disclosure: I worked as a reporter for MPR from 1999 to 2007.)

You can’t really blame the guy. Kling is convinced the trains that will run right by his radio headquarters will increase “the potential for vibration and noise in the recording studios” and ruin his company’s product.

Aesthetics, as well as vibrations, are MPR concerns
In his most recent letters, Kling makes it clear he is also personally affronted that the train and its overhead electrical wiring would, in his opinion, ruin the view from downtown to the Capitol — the so-called “Capitol Approach” designed by architect Cass Gilbert. In his letter, Kling called it a “long-term historic mistake.”

“It is one of those mistakes,” wrote Kling, “that future generations will look back on and ask ‘what were they thinking?’ ” Kling continues, “It is equal to putting a train down the middle of Frederick Law Olmstead’s design for the Capitol Mall in Washington, D.C.”

In response, Nancy Homans, policy director for St. Paul Mayor Chris Coleman, said, “The street car system in St. Paul was electrified in 1888, several years before Cass Gilbert designed the Capitol. So I expect (Gilbert) assumed a transit infrastructure, including overhead wires, was part of the context for his building.”

Homans added this reminder:  MPR officials at one time had plans to build a skyway across Cedar when they built their new building.

Kling is still hoping to get the line moved off Cedar, suggesting Robert Street – two blocks over — as a better alternative.

Robert Street ‘alternative’ studied, rejected
But Cedar Street has been the leading route for LRT in St. Paul since 1990, according to Steve Morris, light rail project manager for the Ramsey County Regional Rail Authority. “Dozens of routes were studied,” said Morris, including Robert Street, which was rejected each time it was analyzed.

“It would interfere with the Robert Street Bridge,” said Morris. “If you take out lanes of traffic for light rail, you lose some utility of the bridge.” Additionally, Morris added, “Cedar Street provides good access to the employment core of downtown, and doesn’t create major traffic issues.” LRT and city officials say Cedar provides the best access to the Capitol, Lowertown and future commuter rail and has the lowest impact on utilities.

So, the possibility of Kling getting his way doesn’t look good this time.

“Cedar was chosen for a number of reasons,” said Laura Baenen, spokeswoman for the Central Corridor project. “This route has been chosen; this is the route we’re going to do.”

Kling’s not the lone opposing voice on Cedar. MPR’s neighbors, the Central Presbyterian Church and the Catholic Church of Saint Louis, King of France, are also sending their own letters to light rail officials. They say they’re worried about the impact of vibrations on their historic buildings and say the train’s close proximity to their churches will impede access for weddings, funerals and religious services.

Given Kling’s trepidation about vibrations’ impact on the lifeblood of his core product — radio — why would MPR invest in a $53 million headquarters expansion on a street that for more than a decade had been the chosen route for a light rail line? (The expansion was completed in July 2006 after gaining significant concessions from the city of Saint Paul. Among those: closing a street, selling a public building and a small chunk of open space to MPR, and giving the company a $3 million forgivable loan.)

“We worked on the assumption that the train would run on the west side of the street or in the middle,” said MPR’s Public Affairs Director Jeff Nelson, who added that MPR’s sound engineers thought they might be able to “make it work.”

But, the problem got bigger for MPR, Nelson said, when preliminary engineering details emerged in April showing the train running just 8 feet from the curb of MPR’s doorstep. The closer the train, the greater the potential vibration. And all that rumbling, Nelson contends, would make all of MPR’s 28 broadcast studios “unusable.”

Late last month, city engineers joined Central Corridor engineers and a consultant to test the vibrations. Results of those tests should be known by the end of the month. Central Corridor spokeswoman Baenen wouldn’t say how much the testing cost, but said it was part of a $3 million contract with an engineering firm.

Depending on the results of the testing, MPR’s Nelson said, the company is looking at three scenarios:

• If the vibrations indeed render the studios unusable, MPR will have some “serious conversations with the Central Corridor project,” Nelson said, though it’s not clear what those talks would entail.

• Another scenario would have the Central Corridor project pay for some “serious mitigation at the level of the rail bed,” using giant rubber mats that absorb vibration, he said.. (This is probably the most likely, because this kind of vibration mitigation is common with light rail projects.)

• Or, if the test comes back clean, then there should be nothing to worry about. (Kling, however, could continue to press his case against Cedar for other reasons, like messing up the Capitol Approach.)

In any case, Nelson insists MPR supports the LRT project.

“We’re working very closely with the Central Corridor project office on this,” said Nelson. “We’re not working against them. That doesn’t mean there’s not tension or conflict.”