Courtesy of the Weinstein Gallery
“Untitled 11” by Mikhail Baryshnikov

Merce Cunningham has quite often and quite famously (or infamously, depending on your point of view) declared that his dances aren’t about anything. “There’s no thinking involved in my choreography,” the New York choreographer has said. “I don’t work through images or ideas. I work through the body…. If the dancer dances, which is not the same as having theories about dancing or wishing to dance or trying to dance, everything is there. When I dance, it means: This is what I am doing.”

To prove his point, Cunningham — for the last 50 or so years, and with the instigation of his life-partner composer John Cage (who died in 1992) — has insisted that, for every new dance work, his choreography, the score, the costumes, the lighting and the décor be created independently and combined, for the first time, on opening night.

A continuation of the “chance operations” Cage introduced to Cunningham for creating art, this approach to performance allows all the elements to exist in the same time and space but without being connected to one another. (During the Merce Cunningham Dance Company’s performance of “Split Sides” at Northrop in 2005, for example, the choreographer and several patrons took turns throwing dice to determine which costumes, décor, choreography and music would be performed together.)

Each audience member is then free to make their own meanings and connections, if they choose to do so. “Cunningham is not interested in telling stories or exploring psychological relationships: the subject matter of his dances is the dance itself,” according to the MCDC website. http://www.merce.org

Baryshnikov’s photos aim to capture layers of drama
However, the Russian-born Mikhail Baryshnikov, the world’s most famous dancer for his technical virtuosity, artistic grace and distinctive character portrayals in the classical story ballets, insists that multiple layers of drama are embedded in Cunningham’s choreography. He’s got the photographs to prove it: his photographs, currently on exhibit at the Weinstein Gallery in Minneapolis through Aug. 2.

The show of large-format, digital photographs is titled “Merce My Way.” Which, for Baryshnikov, says it all. “The title of the exhibition explains what I’m trying to do,” he told me during an interview at the gallery on Saturday. “I’m showing Merce’s work the way I see it personally. Most people miss certain things in Merce’s work, because it happens so fast: boom, boom, boom, boom. Most think he’s cold, that his choreography is a kind of intellectual exercise, so if you want to see it, OK.” 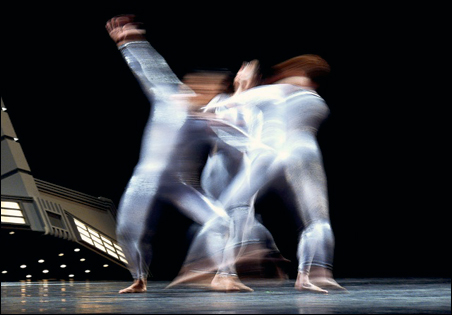 Courtesy of the Weinstein Gallery
“Untitled 24” by Mikhail Baryshnikov

“But in my view — and it took a lot of years to come to this realization — there’s a drama under the surface, like a volcano ready to erupt,” he added. With enthusiasm he darted over to the photograph “Untitled #24,” in which Baryshnikov has captured three dancers in silver unitards in a mercurial blur of movement. Time past, present and future simultaneously exist in this image, which captures the ephemerality of dance in a moment that literally stretches the body through time and space. To Baryshnikov, the image also captures an emotion, a state of being. 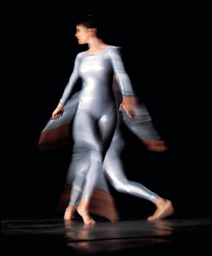 Courtesy of the Weinstein Gallery
“Untitled 13” by Mikhail Baryshnikov

The photographs’ grainy, pixilated and blurred effects are purposeful, he added, and in #13 and #24 give the unitards a painterly quality. “Look, they’re like brushstrokes,” he said of the shimmery lines texturing the dancers’ silver-clad arms and legs. “You know how sometimes artists scratch the canvas intentionally to give a more dimensional look? This adds those dimensions.”

Not only were the dancers performing (all the photographs were taking during dress rehearsals) as Baryshnikov snapped “thousands, thousands, thousands” of images; he was also running back and forth along the front of the stage. “I need part of the scenery, the depth of the field, someone in forefront and middle,” he explained. “Some people have different dynamics; some are fast and some are still. The camera likes all of that.”

He also tilted the camera up and down, opened and closed the aperture, or “I’m dragging the shutter to change the speed, because you don’t want to get the camera into a mode where it will freeze the movement. You want to extend it—but not too much. If it’s too blurry, it won’t work. Certain shapes have to be in focus and certain shapes can smear a little bit, but you don’t want to know what’s the beginning or end of the movement.”

Photographic duets: Bodies merge in digital image
In other words, each photo shoot was a duet, in which Baryshnikov’s and the dancers’ moving bodies became conjoined — with a click — in a singular digital image. “Dance Magazine and the little dance books,” he explained, “they try to get this dancer in the air with the legs as high as possible behind their ears, then they think this is successful. This is nonsense in my point of view.”

“I’m not doing…,” and here he demonstrated the old-fashioned portrait-taking technique whereby the photographer placed a hood over his head, the subjects held their breaths, and then, clicking an invisible shutter bulb in his hand, he grins and says, ” ‘Smile everybody, ‘ while here I am flicking my cigar.”

Instead, Baryshnikov’s photographs “distort the human body in the most beautiful way,” he continued. It’s rather shocking, at first, to see Cunningham’s complex, intricate choreography (much of it created via the computer program DanceForms), which is always executed with breathtaking rigor, crystalline precision and flawless articulation, made mutable in these photographs.

But then the reason for Baryshnikov’s passionate insistence on seeing the dancers this way became clear, as he took me over to “Untitled #20,” one of the few photographs with a dancer clearly portrayed, and in mid-arabesque. “One dancer’s in backdrop, one’s in foreground,” he explained. “They’re all in space and depth of field in different ways and create different effects. She’s more in focus, he’s jumping over her, his hands look as if…” “They’re entering her body?” I offered, “or brushing against her like a ghost.” “Yes,” he exclaimed. 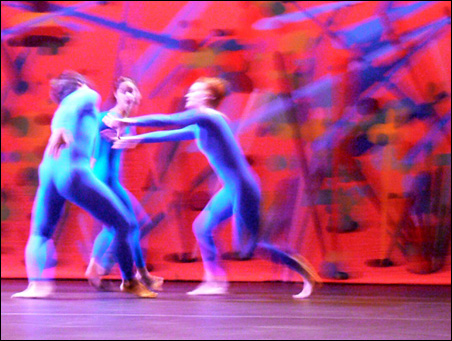 Courtesy of the Weinstein Gallery
“Untitled 9” by Mikhail Baryshnikov

He paused to add that next spring a book featuring closer to 100 images will be published. And when asked which other choreographers he might like to shoot, he suggested Mark Morris. “I’m considering his ‘Romeo and Juliet,’ or even ‘The Hard Nut,’ ” which is Morris’ hilariously campy take on “The Nutcracker.” “But with those images, it would be difficult to keep the story going, to tell the story with all the transitions. With Cunningham, you take abstraction and try to decode it.”

To prove his point, he took me to “Untitled #9,” a trio in which a central woman reaches her arms forward with almost unspeakable heartbreak, conveying an intense sensation of yearning. “Look at this! It’s something you so rarely see. To slow down so much urgency, there’s so much of the directness of the intent,” Baryshnikov explained earnestly. “This is emotional choreography! It’s a human drama here, because you could create millions of stories about these three people. And that’s what I like.”