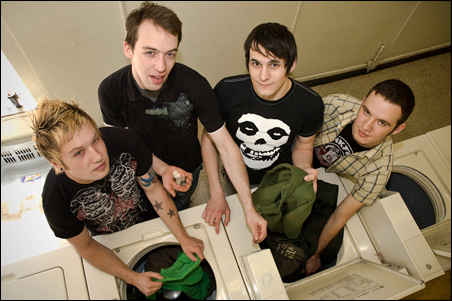 In the beginning, there was nihilistic noise, anarchy, safety pins, black leather jackets and spiked hair. There was violent, elemental music scorched with shouted, caustic commentary. Thirty years later, the crumbling social and business institutions that punks reviled are still in control and still crumbling and the genre itself has been mostly reduced to an adjective used to market bands eager to appear edgy.

Even nice, clean-cut suburban guys who take daily showers, show up for their gigs on time and choose a fuzzy, warm name for their band — Green Sweater Society — will describe themselves as punks these days.

Apple Valley’s Green Sweater Society was until recently known as Running Down Renee. The name was changed after some personnel changes and alteration of musical direction and because some folks thought the name implied something sexist or something violent against someone named Renee, says lead singer and guitarist Steve Rhoden.

“We used to be more folk pop and now we’re alternative, indie and punk,” he says of the change. “Plus, some people actually took offense at the name.”

Attention, please
Two of the five songs on the EP can be heard at the Green Sweater MySpace page.

“To Entertain You” is a bopping little Rhoden-penned number about the many depressing bar gigs the band played in its four years of existence as Running Down Renee.

“We were, and still are, a bar band. ‘To Entertain You’ is just an outcry to get people to listen. People [in bars] are more interested in drinking than listening to you,” Rhoden says.

Consider these lines from the song: “Drink to us, drink to your friends, drink to the night you might not remember again. You’ve only got one life that you can throw away.”

With the release of “Verde,” and then a full-length album early next year, the band hopes to start doing regional tours of small clubs, making enough money so that Rhoden can give up his administrative job at a local publishing firm.

The 24-year-old isn’t looking to stand in front of the biggest, brightest lights; just the lights illuminating music clubs rather than bars with a focus on drink specials.

He hopes Green Sweater Society (they consider Astronaughties as a possible new name) sets itself apart from its peers musically, of course, but also with behavior some club owners might be unaccustomed to: Promptness.

“We arrive on time for our shows,” Rhoden says.

For most jobs, on-time arrival for employees is something employers take for granted. In the rock music world, it’s a rarity Rhoden hopes club owners and patrons will appreciate.

On a band website, the Green Sweater Society describes itself as, “4 clean cut ROCKERS [who] give you an original sound medley along the lines of Weezer, REM, and Panic at the Disco.”

The story of Green Sweater Society is certainly not the story of Johnny Rotten. But then that story has been told. A greener, fuzzier day has dawned — and it has dawned on time, too.

The Moondance Jammin’ Country Festival is this weekend from Thursday through Sunday in Walker, Minn.

Some of the name acts include Sawyer Brown, Minnesota’s own Rockie Lynne, Trace Adkins, Gretchen Wilson and Gary Allan. There also are some country odds and ends tossed in, including Sara Evans (a cast member of “Dancing with the Stars”) and Diamond Rio. The latter was not long ago one of the biggest names in country music with 13 Grammy nominations and five No. 1 hits.

The band’s red, white and tear-stained “In God We Still Trust” was the subject of a viral email circulating a couple of years ago. The email claimed the song, while popular in live performances, couldn’t get air play because its reverent message was “politically incorrect.”

“Many of us feel great concern with the movement of a dissident minority to eliminate God from the face of America! If they succeed, it will destroy the very principles upon which our nation was founded,” the email stated.

Snopes.com and others soon figured out the email was a long, poorly written and transparent lie. Duh. If a song’s popular, radio stations are going to play it. Country stations are hardly shy about wrapping themselves in the flag. If they can do so while waving a Bible around, so much the better.

Tickets for the Moondance festival are $140 for the three-day festival. Before you pack for the trip to Walker, please note that portable toilets are available for rent for the fest, and guns are not allowed.