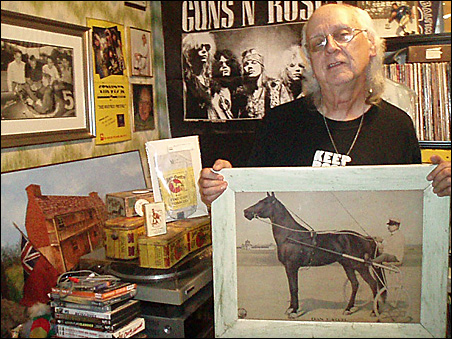 If the magnificent Big Brown becomes the first horse in three decades to win the Triple Crown on Saturday, his feat will be but a blip on America’s over-stimulated sports and entertainment radar. But time was when a racehorse captured the attention of the nation, and became a reflection of its soul: The first and, arguably, most famous was Dan Patch, a crippled and nearly euthanized nag who rose from the semi-dead to achieve folk-hero status in harness racing, the most popular spectator sport of the day at the turn of the century.

“[Dan Patch] was Minnesota’s first superstar, even though he was born in Indiana,” says retired teacher Jim Ashworth, standing in the doorway of his St. Paul home and looking at a framed poster of the great pacer, which hangs amid the thousands of autographed sports, music and movie memorabilia overwhelming his two-story home. “He was probably the greatest athlete in his sport. It took many, many years for them to break his time. He’s just like Babe Ruth, who is still the greatest home run hitter, [even though] conditions have changed and people have done better.”

That’s no hype. As the dust jacket of the just-published “Crazy Good: The True Story of Dan Patch, the Most Famous Horse in America” (Charles Leerhsen; Simon & Schuster; $26) puts it: “America loved Dan Patch, who, though kind and gentle, seemed to understand that he was a superstar: he acknowledged applause from the grandstands with a nod or two of his majestic head and stopped as if to pose when he saw a camera. He became the first celebrity sports endorser; his name appeared on breakfast cereals, washing machines, cigars, razors, and sleds. At a time when the highest-paid baseball player, Ty Cobb, was making $12,000 a year, Dan Patch was earning over a million dollars.”

Leerhsen, a Sports Illustrated editor, will be appearing June 21 during Dan Patch Days in Savage, Minn.

Never mind Sea Biscuit, Dan Patch is the only horse to make its way into Ashworth’s sprawling collection. The 67-year-old obsessive autograph hound has collected a dozen Dan Patch pictures, posters, cigar boxes, tobacco tins and lunch pails; a tobacco pouch, a deck of cards, and buttons from the ongoing Dan Patch Days in Savage.

“I grew up two blocks from the [Minnesota] State Fairgrounds, which is where he set the record. Growing up, I’d always heard the name, `The Great Dan Patch,’ and somewhere along the line I saw the movie (“The Great Dan Patch,” 1949), which was pretty good. I don’t have any other [items] by any other horses; he’s the only one who captured my fancy.”

Ashworth shows his visitor a pristine cigar tin embossed with a picture of the horse-and-buggy icon.

“I paid $26 for this; I picked it up from Joe Egan, who had a relative who worked with Dan Patch and he invited me to his house to see his collection. He died several years ago. I was one of the few people he allowed in to see his collection. He had a lot of stuff, because they merchandised Dan Patch. He and his wife had a booth at Heritage Square (at the State Fair), where they were selling these, and he said, `I will guarantee you it will always be worth what you paid for it, or more.’ So he got me started, and now I just keep my eye out.”

To browse Ashworth’s collection is to pick at scabs from a simpler time. Leerhsen’s book — which chronicles Dan Patch’s career that started in the barns of Savage, to the tracks in and around St. Paul, and his controversial owner, M.W. Savage — is further testament to that simplicity, as illustrated by this quixotic editorial from the Chicago Tribune, published the day after Dan Patch set the world record for a mile:

“Dan Patch is only 7 years old, but he has thousands of friends who will be rejoiced to hear that by pacing a mile in 1:59 he has established a world record.

“It is no wonder that Dan Patch has friends. He is not only a great horse. He is an amiable and sociable horse. He likes people. He likes to turn his head and look at people when he is on the track. He likes to listen to the band. He likes things in general. He has a good time. He is a good mixer. That’s why he has friends as well as admirers. That’s why, when the news goes out that Dan Patch has paced another wonderful mile, one will find that all of Dan Patch’s human acquaintances are visibly, and sometimes hilariously, gratified. Dan Patch is a good fellow.

“He was first driven when he was a four-year-old. How gentle a disposition he has shown is by the fact that, although he is large and powerful, he was broke to driving by a man 74 years of age. In that first year of his track life he went a mile in 2:16 ¼. During the next year he brought his record down to 2:04 ½. In the following winter he was sold for $20,000.

“At the opening of the 1902 season, therefore, he was a six-year-old possessing a 2:04 ½ record and a $20,000 label. He was destined to treble his value during the season. The way he did it was by going a public mile in 1:59 ¼. He was then bought by Mr. M.W. Savage of Minneapolis for $60,000. It is an indignity to Dan Patch to buy and sell him. There are many human beings who, if they were bought and sold, would appeal less to one’s sentimental feelings. Dan Patch is only an equine being, but he is too noble a being at that to be made a commodity. However, if men will insist on making him a commodity, it is only fair to say that they ceased some time ago to do it any price under $60,000.

“In the future they will not be able to do it except at a price for about $60,000. That quarter of a second which Dan Patched knocked off his record day before yesterday had a distinct money meaning. It made him a more valuable commodity than he was before.

“But let us forget that he is a commodity. Let us remember only that he is the most magnificent and the most magnanimous horse that ever put on a harness. May he live long and prosper.”

Dan Patch and The Collector: still crazy good after all these years