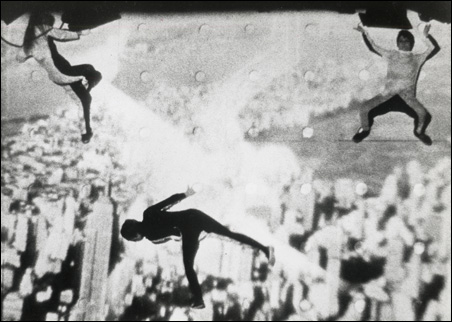 Courtesy of Walker Art Center
An early performance of ‘Planes.’

How many times have you watched a dance performance in a museum while comfortably slumped in a beanbag chair on the floor? Or, for that matter, how often do you sit on the grass in a park and watch dancers spiral down trees, or gently and methodically gesture through movement phrases while lying on rafts in a pond?

Last Saturday I did the former. This weekend I’ll do the latter. Both are part of “The Year of Trisha,” a celebration of the life and work of iconic choreographer Trisha Brown, which reaches its conclusion at the end of this month. But not before the Trisha Brown Dance Company returns July 5 to the Walker Art Center to perform four of Brown’s early movement experiments outside.

First, a word about the ongoing indoor performances of “Planes,” which are part of “So That the Audience Does Not Know Whether I Have Stopped Dancing,” an exhibition of Brown’s body drawings, videos of her dances (including some of those that will be performed this weekend outdoors), and Thursday and Saturday renditions of “Planes.”

The “stage” for the 1968 work is a large white vertical platform with a grid of circular holes (covered with mesh flaps), in which three dancers stick their feet or legs or arms, grasp with their hands, or use as climbing holds as they slowly make their way around the platform’s surface. Meanwhile, a very ’60s-ish film of the New York skyscape, mewling babies, psychedelic effects and Simone Forti dancing is projected on the platform’s white surface, creating a confluence of movement past and present.

Nestling into a beanbag, watching
On Saturday the members of Black Label Movement were taking turns at “Planes.” And it was a wonderfully relaxing sensation to nestle into a beanbag, look up at the dancers, watch them work, and meditate on movement and meaning, or lack of meaning.

One of the dancers, Joanie Mix, later told me that there are two rules for performing “Planes” (Brown always has ground rules, systems and parameters; the movement may look casual, but it’s created according to clear instructions): that the movement should be performed very slowly; and that the performers should never be vertical.

I watched Mix, Megan McClellan, Kalli Schmuecker, Anat Shinar in various combinations during two cycles of “Planes.” Then, wandering through the gallery, I found the source of the exhibition’s title: a text in pencil lightly covered over with a tent of penciled lines. Titled “Untitled (Locus),” the 1976 work includes what might be Brown’s movement philosophy. It includes the lines, “I may perform an everyday gesture so that the audience does not know whether I have stopped dancing,” and a description of her choreography as including “quirky personal gestures, things that have specific meaning to me but probably appear abstract to others.”

Wonderful insights, really, for appreciating the four 1970s works to be performed this weekend. The spectacularly straightforward “Man Walking Down the Side of Building” (that’s right, a performer in a harness walking down, perpendicular, to a wall) has not been staged since the 1970s, and will occur on the brick Barnes building. The quirky assemblage usually performed indoors, “Spanish Dance,” will take place in the Sculpture Garden.

‘Spiral’ to be performed on trees
In Loring Park, “Spiral” will be performed down the trunks of trees. (Back in April, Trisha Brown commented during a public discussion, “I love those four-and-a-half seconds when the bodies are straight out, zipping around the tree!”). “Group Primary Accumulation on Rafts,” originally commissioned by the Walker and which premiered on Loring Pond 1974, will occur there again.

In the ’70s, Brown made performance history with these deceptively simple works –  innovatively constructed movement experiments with time, space and “stages” other than those inside a concert hall, that elevate what might be considered everyday to a crystalline moment of artful expression. This Saturday, they’ll make making art history again. And another generation of passersby, dance aficionados and culture mavens will get to see what all the fuss was about.