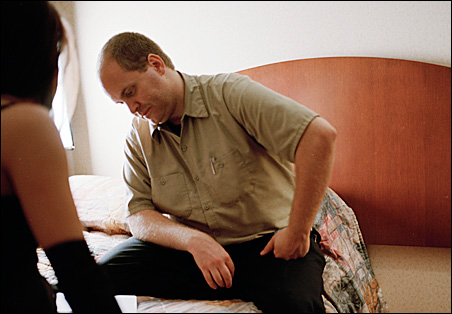 Earlier this week at the Ritz Theater, where Minneapolis video-store owner John Koch premiered his darkly comic directorial feature debut “Je Ne Sais Quoi” to a near-sellout crowd, persistent applause after this first of 12 screenings compelled the shy cinéaste to stand — modestly, at the back of the room — and be recognized.

Someone, knowing or sensing the guest of honor’s reserve, playfully yelled, “Speech!” and Koch obliged at low volume, thanking everyone but himself before offering details of a party at which, one guessed, he wouldn’t be singing karaoke or wearing the lampshade.

Little else in the 35-year-old’s artistic and entrepreneurial career bespeaks the slightest timidity or even caution. Indeed, in sharp contrast to the writer-director himself, the young protagonist of  “Je Ne Sais Quoi” (continuing at the Ritz through July 3) is absurdly overbearing and narcissistic, a part-time wedding videographer and self-described “insufferable bastard” (played by Dave Andrae) whose desperate quest for female companionship has him saying all the wrong things at the worst possible times. Even in the moments when Andrae’s slacking art-snob Paul is clearly being funny — “No one has ever made polka for the wrong reasons,” he declares at one point, “and no one ever will” — his humor belongs distinctly in the “Look at me!” genre.

Koch’s video store near Eat Street hasn’t hesitated to make itself known, either. Cinema Revolution — its fighting agenda being right there in the name — has agitated for film artistry ever since its inception in 2003; rental titles are discerningly curated and meticulously arranged by nation of origin and director (or auteur, vous savez?). In “Je Ne Sais Quoi,” Koch’s shop even enjoys an immodest cameo — in the form of a DVD rental box with Cinema Revolution’s distinct red-on-white logo, an unlikely aphrodisiac for Paul to use on his understandably reluctant neighbor crush Anna (Victoria Nohl).

So where, if ever, does the shyness come in?

Cinematographer played the heavy
“I was not really comfortable with being the heavy on the set,” Koch says quietly over coffee in Lowertown. “So fortunately my cinematographer, Greg Yolen, filled that role for me. I just told him, ‘I don’t want to boss people around. I don’t have the confidence.’ I knew what I wanted out of the work, but I didn’t want to have to be the guy with the whip. So that’s where Greg’s personality and his vast experience came in handy.”

In purely visual terms, the collaboration between Yolen and Koch — both graduates of the Minneapolis College of Art and Design — yields striking images even in standard-definition video in an eight-day shooting schedule (!) and on an impressively meager budget of $5,000 (funded in part by the sale of Koch’s Chevy Blazer). “Je Ne Sais Quoi” makes evocative and at times hypnotic use of local landmarks including the stretch of Hennepin Avenue near the Uptown Theatre, the light rail train, and, particularly, the new Minneapolis Central Library, where Paul enjoys a long and believably awkward conversation with Anna. (The leads’ lack of screen chemistry actually feels appropriate here.)

Cinematic references naturally abound in this film by a born movie-lover: In his press kit, the native Minneapolitan mentions European directors Mike Leigh (“Naked”) and Jean Eustache (“The Mother and the Whore”); the film itself features supporting characters named Antoine and Colette (that’s Francois Truffaut, vous savez?), as well as a scene whose shooting seems directly inspired by Jean-Luc Godard’s great “Vivre sa Vie.” Then there’s struggling screenwriter Paul, an antihero whose blatantly abrasive and intermittently unlikable personality takes some of the same inspiration from the French New Wave that Martin Scorsese took in the mid- to late-’70s, particularly in his underrated “New York, New York.”

So, too, “Je Ne Sais Quoi” — which in its best moments is daringly discomfiting — seems to explore the acute social retardation that so often (or always?) comes with cinéastes who’ve spent too much time in the dark.

The life-art connection
Koch, who’s currently preparing another eight-day shoot for his follow-up feature, “The Seducer,” isn’t remotely shy about admitting the connection between his life and his art.

“Sometimes a screenplay — or a story, or a song, any work of art — doesn’t really get finished until the artist has gone through enough experiences to make it coalesce into what it needs to be,” he says.

“Sometimes the process gets stalled because it’s waiting for your life to create the circumstances to bring about its completion, which was the case with ‘Je Ne Sais Quoi.’ So the film has a lot to do with my own personal experience — my own personal relationships, a lot of the stories and scenarios and episodes from my own life. In order to find the right resolutions in the film, I needed to have the right resolutions in my life.”

“It seems as though almost every filmmaker I’ve come across has this agenda of building a career,” says Koch. “They want to find money to make a film that will launch them into a bigger film, with the hope of some day getting actors from ‘Law and Order’ to be in the film so they can get the film into Sundance and continue climbing the steps of the ladder.

“I don’t see things that way. I make films because I have something to work out.”