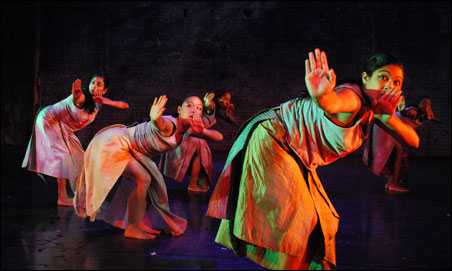 The Twin Cities area is gifted with three major dance companies representing three different styles of dance from India. Perhaps the most accomplished and well-known is Ragamala Music and Dance Theater.

At the same time, the Ramaswamys have deployed Bharatanatyam in the generation of cross-cultural collaborations (with Balinese music and dancers, with a deaf artist whose medium is sign-language, with an African dance troupe, with a Taiko drumming group) to critical and popular acclaim.

In a word, they’re golden.

Their work is continually evolving, illuminating and breathtaking. In July, their solo for company dancer Tamara Nadel will be featured in “Solo,” a program of works commissioned by recipients of the 2006-2007 McKnight Artist Fellowships for Dancers.

This Saturday, Katha Dance Theatre, founded by artistic director, choreographer and dancer Rita Mitra Mustaphi, celebrates its 20th anniversary with two concerts of kathak dance. Kathak originated in the temples of North India as a story-telling dance form, then became an entertainment. It’s similar to Bharatanatyam in that the form has codified gestures and rhythmic footwork.

The weekend of June 13-15, the relentlessly dynamic and intensely physical Ananya Dance Theatre presents its newest work of political dance, “Daak: Call to Action.” The all-women-of-color collective was started in 1996 by Ananya Chatterjea as a means of social activism, and the women are certainly among the hardest-working, most-earnest, and most-dedicated dancers gracing local stages.

“Daak” is the second in a planned trilogy of works on global environmental injustices, particularly as they affect women and children of color in our own Twin Cities neighborhoods, as well as around the world. Specifically, “Daak,” which was choreographed by Chatterjea and is directed by Dora Arreola, responds to land-rights issues with a ferocious movement vocabulary of struggle and strife.

To create this movement vocabulary, Chatterjea has blended Odissi (a classical-dance form from the eastern state of Odissa that was nearly obliterated during the colonial period) — specifically its wide stance from the hips and what she calls its “sculpturesque forms, strong footwork and emotional articulation” — with Indian martial arts and the deep precise breathwork of yoga.

Eschewing narrative, Chatterjea presents feeling vignettes of emotional hardship and perseverance. It’s not for the faint of heart, or the impatient. But one leaves with the sense that for Ananya Dance Theatre, dance is a serious business with which these women intend to change the world.