Since 1997, on the summer solstice, thousands of people have gathered on the historic Stone Arch Bridge in downtown Minneapolis for Solstice River, a participatory community event orchestrated by choreographer and dance therapist Marylee Hardenbergh.

The event features up to 40 performers placed on buildings, infrastructure and in the Mississippi River to encircle the site with color and movement — all designed to draw the audience’s attention to the river environment.

Far below the bridge, on a jetty arcing into the river, dancers carry large colorful props resembling navigational signs. Kayakers zip across the water and twirl their paddles in unison, or circle motorboats on which dancers reach through space as their costumes billow in the breeze.

To the south, performers in yellow, red or blue unitards swoop and twirl with large gestural movements in Mill Ruins Park, and on the balconies of the Washburn A Mill and adjacent loft buildings. To the north, you might see a dancer on the volumetric tanks next to the St. Anthony Falls Laboratory. 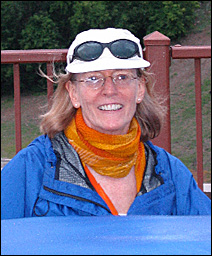 Every year, Hardenbergh brings new components or cultural dimensions to the performance. This year’s “Solstice River XII: Bridging the Cycles of Life,” which takes place on Saturday (June 21), will include the release of 13 white doves honoring the people who died when the Interstate 35W bridge collapsed last summer. Another addition is that a bagpiper will play a lament.

360 degrees of dance
“Who would have thought, back in 1997,” she says, “that ‘Solstice River’ would become the annual performance event it has become, and that the landscape around the river would have changed so much that the performers now appear in places 360 degrees around the site?”

Through the years, Hardenbergh added Dakota performers to recite prayers, drum, sing and draw audience members into circle dances. She also placed performers on one of the grain silos, who unfurl the Dakota colors in long bands of color down the length of the concrete forms. 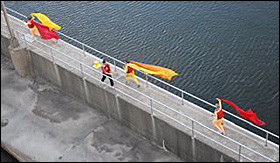 MinnPost photo by Camille LeFevre
Any place can be a stage along the river.

In 2006, she extended “Solstice River” into “One River Mississippi,” a performance piece at seven sites along the river from Itasca to New Orleans. While each section was specific to the culture, history, and the natural and built environment of its site, the entire piece was performed simultaneously, with shared music and movement connecting audience members, performers and the river across time and space. That year, Hardenbergh put dancers on the endless bridge of the Guthrie Theater.

Every year, six women (Hardenbergh calls them Women of the Waters) promenade down the Stone Arch Bridge. The enormous lock gates dramatically open as the women walk out onto a 50-foot-high walkway. Here they move in unison with expansive movements of reverence and joy, then pour the water they’ve carried into the lock.

At dusk, a 1,200-foot-long swath of blue fabric is unfurled down the middle of the bridge. Hardenbergh and her bridge captains urge the audience to hold the river and ripple it into waves as children dart underneath. “I want two things to happen to the audience,” says Hardenbergh of the performance. “I want them to feel more connected to the site and to each other.”

A detailed program is handed out to the audience before the performance begins and tells viewers where to look, and when. “The audience walks up and down the bridge, and runs from one side to the next, to find the dancers, and they hear the music and feel the rhythms,” she explains. “All of this opens up the site 360 degrees, so people feel like they belong there.” 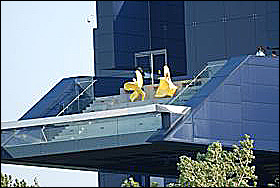 MinnPost photo by Camille LeFevre
Above the river, on the Guthrie’s endless bridge.

The program includes information about the river, preservation efforts on its behalf, and how the individual can participate in keeping the river clean for future generations. Transformation is Hardenbergh’s goal. She wants to change how audiences perceive the river and its industrial environs. And she wants to change how individual audience members see themselves in relation to dance and architecture, the natural and built environments, and place and community.

A survey conducted after the 2005 Solstice River indicated she has succeeded. Respondents reported that their understanding of the bridge’s history, the river environment and the overall site were enhanced by attending the performance. Furthermore, 60 percent of respondents said the Stone Arch Bridge and Solstice River are now connected in their minds.

The Minneapolis movement-theater group Skewed Visions is presenting a new work created for the Ritz Theater’s distinctive frame-like proscenium, based on the life and work of visual artist Jasper Johns. Early in his career, the artist collaborated with iconic choreographer Merce Cunningham and sound-barrier-breaking composer John Cage, creating sets for the duo’s performances. So it’s no surprise that Jasper Johns includes such intriguing dancer/choreographers as veteran Laurie Van Wieren (who’s entering the next phase of her own work with a grant from the McKnight Foundation) and up-and-coming performance artist Elliott Durko Lynch.

Conceived by Charles Campbell, Glgn Kayim and Sean Kelley-Pegg, Jasper Johns uses selected Johns paintings as performance texts and features an intriguing brown-paper suit that (worn by Campbell) that made an appearance in the April Unbranded performance at the Ritz unbranded. The multimedia, interdisciplinary work also reportedly investigates surveillance and national identity: Think Johns’ flag series as filtered through a 21st-century, experimental-art sensibility.