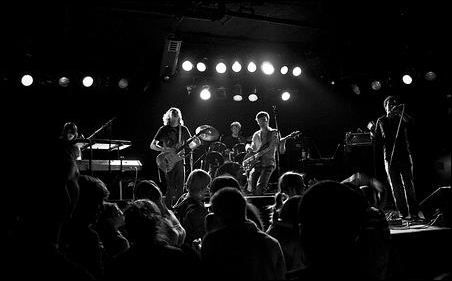 Photo by Karl Wagner
String Cinema will celebrate the release of an EP on Friday at Bar Fly.

So much of what happens in life is unexpected that it’s probably not surprising that so many of us choose to listen to unsurprising music delivering exactly what we expect. We enjoy, and even demand, certain chord progressions, keys and types of melodies in our music, and sometimes some of us reject almost anything that doesn’t meet those narrow expectations.

That’s neither good nor bad. It’s just the way some of us choose to enjoy music. John Lennon once said the key to songwriting was to “just say what it is, simple English, make it rhyme, and put a backbeat on it.”

Ranelle Johnson of String Cinema doesn’t necessarily disagree with Lennon, but the psychology student at the University of Minnesota at Duluth does enjoy making her “orchestral rock” challenging.

“It’s not important for [music] to be difficult,” she says. “That’s just our goal as a band. I don’t think in general it’s important. There’s plenty of good music that’s obviously not difficult to play but it’s still amazing. But for our band, we’re all classically trained musicians; for me it’s important to play something that’s challenging.”

String Cinema celebrates the release of its self-titled EP this Friday (June 13) at Barfly in downtown Minneapolis.

You can hear two of the EP’s songs at String Cinema’s MySpace page.

“Another Melodrama” opens with Johnson and Galle-From playing a fluid, romantic melody that’s abruptly restated as urgent alt-pop, which is reiterated as a darker something approaching grunge.

Changing course
“Our music has a lot of changes, that’s for sure,” Johnson says with a laugh. “That’s the one thing that takes a lot of listeners off-guard when they hear all the changes we have. That’s why they can’t dance to it. It keeps changing.”

“The point of [‘Another Melodrama’] is using the same melody line but over different major and minor chords.”

“In the very beginning of the song, if you listen to the right hand of the piano, the high notes, it’s the same melody lines throughout the verses and the choruses, until you get to the end where it just kind of blows up. The end is kind of a dramatic, powerful, in-your-face ending. The whole song kind of captures every emotion possible.” 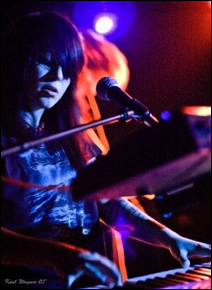 While that might seem an overly broad statement, remember that Johnson studies psychology. She knows something about the subject and hopes to learn more after graduating this fall. After taking a year or two off to focus on music, she says she would like to resume her studies in graduate school, eventually going into research.

“Instead of studying people by their [verbal] responses, I want to study them by their physical responses like heart rate and brain scans and stuff like that,” she says. “Because [verbal] responses come along with decision biases and cost-benefit ratios and you can’t get a true test of someone’s [feelings].”

Johnson gets to apply some of her education as she works with her band mates on songs. She writes the melodic outlines, complete with lyrics, typically, and then presents the song skeletons to the band. Band members then flesh them out on their individual instruments.

Even though the group’s members are young — they’re all in their early 20s except for drummer Erlemeier, who just turned 18 — they’ve spent most of their lives studying music in classes and school orchestras and the like.

There’s sometimes a tendency in the band for people to want to flex the musical muscles they’ve built up over the years. It was especially problematic when the band first formed.

“Our first problem was we had a lot of good musicians in the band and everyone wanted to be like the main star so it just sounded like a big bunch of clutter.

“Everyone tried to play this amazing part and it wasn’t working out. We’re still kind of working on the problem,” Johnson says. “Some of us try to back off at certain parts and people are playing more simple stuff so it actually sounds good and it’s not too crazy.”

She says she doesn’t really worry about whether the relative complexity of String Cinema’s music is going to put off audiences conditioned to enjoy mainstream pop music.

“As far as the audience goes, I like the music that we play and I believe in it. I don’t really believe in like dumbing down music for an audience. I don’t know if that’s even the right term. I think anyone can enjoy our music how it is.”

The most important thing, she says, is that the band members enjoy the music.

“As musicians at the level we’re at, playing difficult music is more challenging and just more fun in general.”

String Cinema is at Barfly, 711 Hennepin Ave., Minneapolis, on Friday (June 13) at 8 p.m. The Great Physician opens the show.