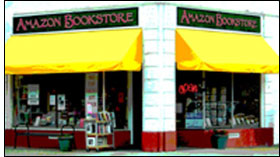 The Twin Cities is losing another independent bookstore. Amazon Bookstore Cooperative, the oldest feminist bookstore in the country, will close its doors at the end of the month, after nearly 38 years in business.

Barb Wieser, the staff-owned cooperative’s most senior employee, with 21 years behind the counter in Minneapolis, said the store struggled for years to compete in a business climate that is increasingly unfriendly to small bookstores.

“It’s very difficult for an independent bookstore to stay open today,” said Wieser. “Between the Internet and the onslaught of the chains, and now the worsening economy, it’s just too hard. There are no large independents in the Twin Cities.”

Amazon was on the market for a few months, and Wieser hoped that a younger buyer or group might take it over. A number of “great women” considered the possibility of buying it, but the economics were too daunting.

“It’s just too risky these days. Pretty much, bookstores are owned by people with money,” she says. “Young people don’t see a future in it. If the most you’re ever going to make is $30,000 a year, well, that’s OK when you are young, but if that’s your career? People looking at it realize you won’t be able to support kids, a life. That’s the reality of bookselling today.”

More than just a bookstore
Amazon specializes in books for, by and about women; children and alternative families; and the transgender/gay, lesbian and transgender communities. You can find a shelf or two devoted to these topics at Barnes and Noble, but those shelves don’t begin to compete with the handpicked selection Amazon offers. The staff chooses every title it stocks, and it favors small presses, literary presses, local authors and highly specialized books that the big chains don’t stock. But beyond books, the store has been a community gathering spot since it first opened on the front porch of a women’s housing cooperative in the 1970s.

“Our biggest heyday was back when you had to come to our store to get these things — there was no Internet, no other place to get the kind of books we sell, and no online communities. This was a haven for people seeking like-minded company,” says Wieser, who pauses to take a call from a distraught regular customer — a man — who has just learned the news. “He was very upset.”

“A lot of people are pretty grief-stricken. Especially GLBT and transgender people, and women in general. Our customers feel like this is their place. It’s always been a community-based bookstore. For some people, it’s been their home; they felt accepted here, when there weren’t a lot of places that accepted them at all.”

Feminism lives
Wieser says Amazon is closing because it’s an independent bookstore — not because it’s a feminist bookstore. “There used to be a lot of feminist bookstores in the country, as many as 110, at one time,” she says. “They closed because small bookstores have closed, not because people aren’t interested in feminism anymore. I see a lot of very involved young women, and books and magazines that speak to them. People think feminism is over, because the media ignores it, but that’s not true at all.”

In fact, Wieser says the political climate during the past eight years has been good for the store. “When the war started, this was a place where people could come to talk about it. Books about current affairs have been very popular. Ecology and global warming have been selling very well. And so have books about the Middle East and Afghanistan. There’s a hunger for knowledge about that part of the world, since we’re so involved in it.”

The store also does a brisk business with bestsellers. “People have been trained to buy bestsellers, because the chains get money for all those big displays they do, and they focus their attention on a few titles from big New York publishers. There aren’t as many people who are willing to take a chance on an unknown fiction book,” she says. Still, the bestsellers that Amazon does sell tend to be on topic. “We sold a lot of ‘Three Cups of Tea,’ last year (written by Minnesota native Greg Mortenson) about building schools for girls in Pakistan. It’s encouraging that so many people are reading that book. We also sold tons of copies of ‘Hit by a Farm,’ by local author Catherine Friend.”

Catering to the craving for bestsellers was essential to staying in business. Wieser says Amazon made other efforts to stay competitive, too. The store moved into a larger space four years ago, expanding categories. When the longtime Minneapolis gay bookstore, A Brother’s Touch, closed in 2003, Amazon attempted to reach out to that audience, although Wieser admits, “We just don’t get that many gay men in here.” She mentions that Query Booksellers, a gay bookstore that opened in the East Hennepin neighborhood near gay coffee shop A Wilde Roast, only stayed open a few months. “If they couldn’t make it there, it was hopeless — and that guy [longtime Twin Cities bookseller Lyle Starkloff] knew what he was doing.”

Surviving feminist bookstores have had to seek other revenue streams to strengthen business. A Room of One’s Own, Madison, supplements its business by selling textbooks to the local student population. The owner of Chicago’s Women & Children First has taken a second job to help support the bookstore, says Wieser. She is directing Amazon’s customers to these stores.

Efforts to stay competitive, however, do not include checking out the competition. “I never go into Barnes and Noble. Never. I don’t really care what they have. I’m not interested. I do love going to the other independents and seeing what they have, though.”

Amazon vs. Amazon
A few years ago, Amazon became involved in a classic David vs. Goliath scuffle with that other Amazon bookstore, which used the name without permission. “We sued them for trademark infringement, but ultimately we agreed to both use the name, and we had to settle out of court,” she said. “It was a matter of who had the deepest pockets, so obviously, we really couldn’t go on with it.” The real Amazon received a small cash settlement from the online store, and used the money to keep the business going a little longer.

Wieser has applied to the Peace Corps, and hopes to advise small-business people in developing countries. Amazon will stay open until the last Saturday in June, and a celebration is tentatively planned for July. “So many women have worked here over the years, and it’s been such a part of the history of the Twin Cities. We want to give people a chance to celebrate that history and get together one more time.”

The stuff of herstory: Original Amazon bookstore to close