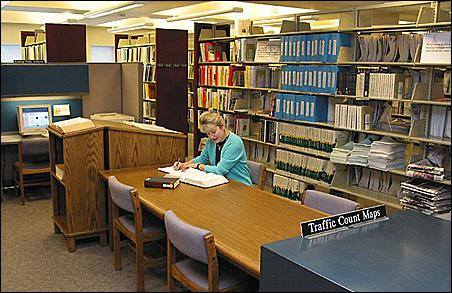 Photo by Jim Byerly
An unidentified customer takes notes at the Mn/DOT Library.

Don’t you hate it when you wake up in the middle of the night with one of those burning questions about our regional highway system? Thank goodness we live in a state with one of the best transportation libraries in the country. If you can wait until morning, you can talk to an information specialist brimming with arcane knowledge about roads, bridges, trains, and the regulations and budgets that hold this tangled web together.

The librarians overseeing the specialty collections at the Mn/DOT Library field about 4,500 questions a year from transportation engineers, state agencies, students and the general public. Founded in 1957, the library holds more than 50,500 items at the Minnesota Department of Transportation building, 395 John Ireland Blvd. in St. Paul. It is open weekdays for in-person browsing or research, and a sizable amount of information is also online.

This is the place to go for questions about spring load restrictions on roads, mailbox safety, speed limits, transit, curb cuts and the history of the interstate system.

“Most of our patrons work in transportation or related industries,” says Library Director Sheila Hatchell. “They may be developing new products or bidding on contracts. Non-technical people contact us too, with questions such as, ‘Do you have videos on snowplows?’ ‘Do you have videos on defensive driving?’ ‘How many bridges are in the Twin Cities?’ ‘When was a particular road built?’ ”

Hatchell says the collection’s hottest items include engineering standards and specifications; Environmental Impact Statements; and information related to current events in the transportation world, such as plans for the LRT Northstar Corridor or the Central Corridor. “Over the past year, transportation financing has been a popular topic,” she notes.

When transportation makes history
Last August, following the collapse of the 35W bridge — or Bridge 9430, as it’s known in transit circles — Mn/DOT librarians were deluged with calls about the bridge, and began to compile a special archive of information about it, which is now online.

This wasn’t the first time the library was consulted during history-making events. Former Library Director Jerry Baldwin, who retired last December, was working late one night just before the holiday break in 2001 when he got a call from the library at the Office of the President in Washington, D.C.

“They were looking for a study that was only held by our library, which discussed the issue of the value of life, from a monetary perspective. It was clear that they were looking at the issue of compensation for the victims of the collapse of the Twin Towers,” he says.

Baldwin worked at the library for 35 years, answering questions both technical and unimaginable. He recalls being stumped just once. “A gentleman came in one day and wanted some assistance trying to assess the social, environmental and societal impacts of a ‘totally new form of transportation.’ ‘What is this form of transportation?’ I asked. ‘I don’t want to tell you that.’ he said. ‘Well, does it fly through the air, move on roads or run on tracks?’ I asked. ‘No, I can’t tell you that,’ he said. Well, it was difficult to help him, but of course we tried.”

Perhaps the answers to that one will be housed here in the future. As for the past, the Mn/DOT Library is a technical library, rather than a library of record, but it does contain a few historical records, most notably the Registered Trails Index.

“Prior to the 1920s,” Baldwin says, “we didn’t have the system of numbered highways we have now. What we had was citizens groups and business groups who were interested in moving the very few motorists that were on the roads at that time toward their locations. Enterprising people went out and marked the highways on trees and fence posts. There got to be shenanigans in which businesses would re-mark the highways in order to bring business their way. So registered trails with logos were mandated, and we have the only copy of these records.”

With so many secrets and gems waiting to be discovered here, why not consider making this library one of your summer destinations? Jim Foti, the Star Tribune’s Road Guy blogger, made a pilgrimage to this “Temple of Transportation” last year after meeting “AJ Froggie,” a transportation enthusiast whom Mn/DOT librarians see a fair amount of during his summer break.

Hey, who needs Valleyfair when there’s fun like this to be had?