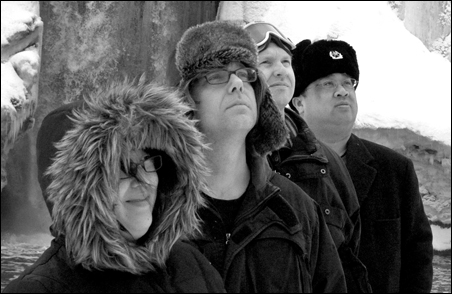 The apocalypse is typically portrayed as a gloomy event. Unpleasantness of one sort and another abounds in what most of us imagine the end of the world to be like. But Atomic Flea is here to tell you that apocalyptic visions don’t necessarily have to be so disagreeable. They can be sunny, finger-snappin’ visions you can tap your toes to.

The title track of their new album, “Babadebaba,” presents a relentlessly upbeat soundtrack to the end of civilization. (Listen to it here on the Minneapolis band’s MySpace page.)

“The song is sort of this silly look at the apocalypse,” says lead vocalist and guitarist Eric Kreidler. “There’s all this disaster and things in the world and here’s this happy, sort of surfy kind of song. That’s where the whole irony comes in.”

“It’s a sense of denial,” says lead guitarist and vocalist Mike Senkovich before breaking into a moment of falsetto. “You know, whatever, la la la, babadebaba…”

Says Kreidler, “[‘Babadebaba’] is probably the catchiest one out of the batch. Our roots are kind of in traditional, Beatles-inspired pop songs. In the last couple of years, we’ve gradually been getting into these spacey, ambient, acoustic kind of things, a little bit. That song is sort of an interesting bridge.”

Atomic Flea holds a multimedia celebration and presentation of “Babadebaba,” their third album, at Bryant-Lake Bowl at 10 p.m. this Saturday (July 5). Advance tickets are $8; $10 at the door.

What’s up, Docs
Kreidler, a graphic designer, and the rest of the band made animated videos — in a style Kreidler likens to the work done by Terry Gilliam of Monty Python — to accompany the performance, plus the new CDs (available at the show) each include a comic book.

Senkovich, a computer programmer, laughingly attributes much of the group’s ability to churn out the entire, complicated project to Google Docs, the search engine’s free online word processor.

Kreidler agrees. “This project has lived on Google Docs,” he says. “I like to think that in today’s rock scene you can talk about Google Docs without complete shame.”

Band members are excited to present the album that was put together over the past 2 1/2 years and the videos and comic books that were assembled in the past six months or so.

Kreidler says the band chose Bryant-Lake Bowl as the venue in which to present the new material because of its built-in projection system.

The videos, he says, are a mix of “animated Terry Gilliam-style cut-out graphics, and time-lapse footage and random hand-held stuff shot around town.”

The YouTube video below for “Fireflies,” a song, like most Atomic Flea material, written by Kreidler gives a preview of what you’ll see at Bryant-Lake. (The song is from the band’s 1998 debut CD, “Counter-revolution.”)

The band is intent on what members call a cross-pollination of media incorporating video, music, comic books, Google Docs, a website, live performances and YouTube, among others.

“YouTube is another part of this whole picture,” Kreidler says. “It’s a really exciting place. You never know, you put a catchy song with the right, quirky piece of video and people might notice it.

“It’s sort of the nature of media right now,” he says. “It doesn’t have to have a million dollar production budget to be cool and be fun. So that’s the approach we’ve taken. The whole video piece of the show is a collage of things that kind of go with each song but are kind of just their own thing.”

Macc daddy
Hip hop artist David Macc is also reaching out in more than one way, with a MySpace page and YouTube video of his “City of Angels” song.

He’s going to perform music from his new album, “Proclamation,” at the Fine Line Music Café this Friday (July 4). Admission will be $7.

Macc describes what he does as “funk hop; hip hop, funk and soul mixed up with R&B.”

” ‘Proclamation’ is my official public statement,” Macc says of this, his second CD, but first in five years. “I chose the name because I felt like I had something to say.

“I went through a lot of family troubles in the last two years while I was really focusing on finishing this album. I’ve been through ups and downs. Hell, I’m kicked out of the house right now, you know what I mean?”

The 28-year-old says he and his partner have separated, leaving him apart from the couple’s four children.

“I wish I wasn’t separated from my family, but I’ve actually been making the best music of my life. And I’m still in my children’s lives, but I just don’t have a home anymore.”

He adds, “That whole thing has ended and ‘Proclamation’ is the marker of that era of my life. A lot of people couldn’t withstand the pressure I’ve been under and if it wasn’t for music, and the fact that I have friends around me who love me, and the fact that I was so determined to win and failure is not an option, I continue to keep going.”

His dream, though, is to be successful enough on stages that he can be out front instead of behind the scenes.

He says he hopes “Proclamation” leads to a slot on a tour of military bases in Europe he’s currently working on landing.

“We’d be touring military bases, you know, shedding some light on the troops. Going and kicking with the boys in blue or tan or whatever color they’re wearing these days,” he says with a chuckle.

“I want to take [performing] to a full-time thing,” he says.

The members of Roomful of Blues come and go, but the contemporary blues band has acquired a life of its own.

But the horns-propelled band, like some George Romero creation, refuses to die. It has a new album out on Alligator Records, “Raisin’ a Ruckus,” and will be at the Dakota Jazz Club on Sunday night (July 6), blowing up a storm.