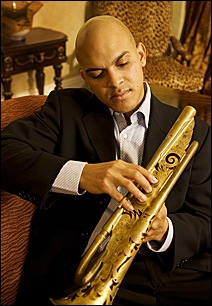 Talented, accomplished, passionate and apparently tireless, Irvin Mayfield is a force in jazz today. At 30 years old, he’s a trumpeter, composer and arranger with several CDs to his credit. He founded the New Orleans Jazz Orchestra, co-founded the band Los Hombres Calientes and leads his own quintet.

In 2003, Mayfield was appointed the cultural ambassador for the city of New Orleans by Congress and other eminent bodies. It’s not just a pretty title.

After Hurricane Katrina, which took the life of his father, Mayfield symbolically reopened the city with a concert of original music at Christ Church Cathedral on Nov. 17, 2005. He serves on several boards (Police and Justice Foundation, New Orleans Arts Council, New Orleans Public Library) and is a spokesman for UNITY of Greater New Orleans, which works to end homelessness.

But he thinks beyond the parishes of his home city. That’s one reason why, for the next year, he’s partly ours.

Twin Cities jazz fans know Mayfield well. He performed here several times with Los Hombres Calientes, brought his New Orleans Jazz Orchestra to Orchestra Hall in February of this year, and returned in March with his quintet for an almost unheard of three-night stay at the Dakota. It was a party complete with tap dancers and second-line parades through the club. On two nights, Mayfield read aloud from a children’s book (“The Jazz Fly”) and the poems of Pablo Neruda. He’s charismatic on stage and full of surprises.

A rare appointment
For Mayfield, for the Minnesota Orchestra, for jazz and for the Twin Cities, his new appointment is a big deal. For Mayfield, it represents membership in a group so elite it’s almost nonexistent. Artistic directors of jazz at major orchestras are few and far between. To the best of my knowledge (and Mayfield’s), there is only one other at this time. Panamanian pianist Danilo Perez is directing the Jazz Up Close Series at the Kimmel Center for the Performing Arts, home of the Philadelphia Orchestra.

For the orchestra, Mayfield’s appointment solidifies a commitment to jazz that began with the opening of Orchestra Hall and has picked up considerable steam since Lilly Schwartz became director of Pops and Special Projects in 2006. She launched the jazz series and lobbied hard for Irvin’s position, a first in the orchestra’s 105-year history.

“We have an artistic director for Sommerfest, Andrew Litton, and Osmo Vänskä for the orchestra,” Schwartz says. “I thought it was important to have an artistic director for jazz. … I’ve known Irvin for 10 years and have worked with him on and off during that period. I’ve seen him grow as an artist, as an ambassador for jazz and for New Orleans. He’s the kind of gentleman who can really make things happen.”

Mayfield believes that “taking a serious position on jazz is going to help the [Minnesota Orchestra] ascend in a national discussion of music. There are many great classical organizations around the world, but the orchestra here can give some direction and leadership in a jazz industry that’s really kind of devoid of leadership now.”

The orchestra’s core audience may be surprised to learn that Vänskä loves jazz and plays it on the side. “It’s a secret passion of his,” Schwartz says. “And Andrew Litton is an avid jazz fan. … He and Irvin have met, and they took to each other like peas in a pod.”

Provocative ideas
One of Mayfield’s concerts will be a performance with the Minnesota Orchestra. No one knows what that will be, but Mayfield has provocative ideas. “We want to be the first institution that really makes the marriage between jazz and classical music,” he explains. “They start in two different places, so we have to go to larger concepts, like adventure, inspiration, romance. … How can a jazz band be adventurous, and what does a classical orchestra have to do to be adventurous, and how can we be adventurous together?”

Some jazz fans wonder if the music even belongs in places like Orchestra Hall. Is it becoming too codified, too institutionalized? Mayfield’s response to such questions is swift: “Why wouldn’t it belong anywhere? Why can’t you play jazz in a church, on a street, at a birthday party, in a club, at a high school graduation? The real question is, why shouldn’t jazz be somewhere it’s not?”

And why is this appointment important for the Twin Cities? According to Mayfield, we’re already pretty cool. “This is a hell of a town,” he says. “It’s a very cultural, artistic place. … I probably would have to say, outside of New Orleans, there’s a lot of from-the-ground-up culture here, not imported.”

It’s good news in an arts climate that has gone through some rough spots lately. The Jeune Lune has closed, Jeff Bartlett has left the Southern Theater, Stewart Turnquist has resigned from the Minneapolis Institute of Arts, Bruce Lilly has stepped down from his executive director position at the Minnesota Museum of American Art. And plenty of people will tell you that jazz is dead. Yet one of our most revered cultural institutions has chosen to embrace jazz in a big way.

“It’s a new direction for the orchestra, an exciting direction,” Schwartz says.

For jazz fans — and the broader audience of music lovers willing to take a chance — interesting things are about to happen.

“We’re going to take what began at the bottom of the Mississippi and bring it back up to the top,” Mayfield promises. “It’s going to be fresh. Audacious.”

A big step for jazz and the Minnesota Orchestra