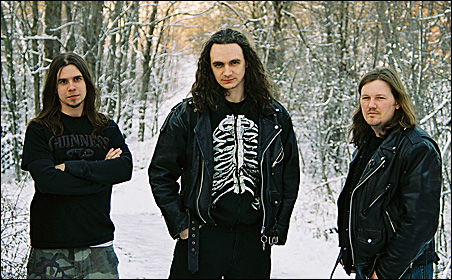 The opening track of Jagged Spiral’s debut album, “Days From Evil,” is reminiscent of Michael Jackson’s landmark video for the title track of his “Thriller” album (the 25th anniversary of the release of the all-time bestselling disc was celebrated a few months ago).

The Minneapolis band’s song is narrated by someone evoking the creepy cool of Vincent Price, the narrator of Jackson’s video.

You can hear Jagged Spiral’s song here. (The entire album is available for free download.)

The tune is like the first scene of a horror movie. The opening credits roll as a phone rings, thunder and guitars crash, and a coy voice of doom describes in quasi-Victorian English the impending arrival of something very, very evil.

On the band’s elaborate website, its music is described as: “Angry. Progressive. Conceptual. Epic. Brazen. Dark. Metallic. Since no other genres suffice, [Jagged Spiral has] decided to declare a new genre of music: ‘Northern Rock’. Rough as a serrated edge. Cold and slick as black ice. The harsh brutality of Gothic Hard Rock merged with ambience, depth, and groove, then left out in the rain to corrode into something completely unique.”

A description that awesome probably could only come from a band awesome enough to name its album “Days From Evil.”

Jagged Spiral might obsess on the eternal void that is the darkness of night and all that, but it doesn’t do so without humor. Check out this performance of “No, I Never Slept With Diablo Cody” on YouTube.

The band has been working on “Days From Evil” for three years. The end of those three years comes this Friday (July 11) at Club Underground, 355 Monroe St. NE, Minneapolis.

S.B.I, Sick Machine and Something to Fear are also on the bill.

Travis and Johnny
At another, though not necessarily opposite, end of the musical spectrum is Travis and Jonny. Despite the name, Travis and Jonny is a five-piece St. Paul band consisting of Jon Kraft on guitar, vocals and harmonica; Travis Bolton on guitar and vocals; Kristen Kraft on piano and vocals; Abram Heyn on bass, and drummer Paul Nevins.

Their end of the spectrum is where The Weavers, a young Bob Dylan, the Washington Squares, Woody Guthrie and Billy Bragg exist in various stages of their careers. It’s loose, upbeat folk music, with sunlight falling on the listener much more often than teardrops.

White Iron Band, originally from Ely, isn’t a “pure experience,” however. The jam band’s honky-tonk is a hot melt of blues, rock and country — perfect for a big time at the watering hole.

It’s music to knock back a couple of shots of Jack to. It’s music for simultaneously stompin’ on the pedal while bitchin’ about the price of gas. It’s a high-five, fist-pump and foot-stomp.

Speaking of which, here’s White Iron lead singer Matt Pudas talking a bit about his band (Mark Grundhoefer of Down Lo is also in the video).

The band released its fourth album, “Devil’s Sweet Revenge,” back in April, but is again celebrating its release this Friday at the Cabooze, 917 Cedar Ave. S., in Minneapolis. It’s very possible that White Iron will also be re-celebrating the Fourth of July at the show, but who knows for sure.

Admission to the show is $7.

He wears a three-piece suit and acts as if he’s destined to die in 1929 of a broken heart. Lonesome Dan Kase plucks out blues of bygone days and heroes. When you hear him picking his percussive style of country blues, you’ll also hear Blind Lemon Jefferson, Blind Boy Fuller and Sleepy John Estes rise up from their graves and point to the rural origins of blues.