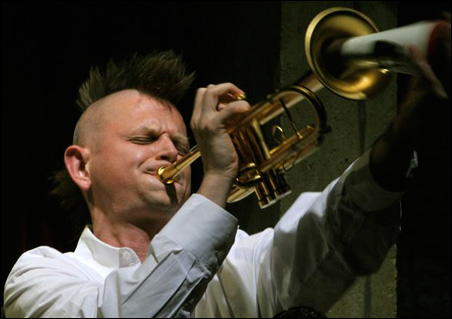 Photo by John Whiting
Kelly Rossum during a recent Jazz is NOW! performance.

There’s something slightly decadent about heading out for the evening at 11:15 p.m. This is Minnesota, where decent people are in bed by then, even on weekends. But depending on where in the metro area you live (and which roads and highways are under construction), that should give you enough time to get to the Dakota by 11:30 on a Friday or Saturday night, when the late-night shows begin.

Launched in 2005 by club owner Lowell Pickett as a way to broaden the Dakota’s audience and musical reach, the late-night series brings a touch of Manhattan to flyover land. In New York City, shows that start around midnight are common. Here, where the bars must close at 2 a.m. (except during the upcoming Republican National Convention), most things are winding down by 11:30, not starting up.

The first series curator was Jeremy Walker, artistic director of Jazz is NOW! and former owner of the Brilliant Corners jazz club in St. Paul. Back then, the cover was $3 and the club offered a limited menu at happy hour prices.

Dan Eikmeier has been curator since June 2007. The cover is still low — just $5 — but the happy hour menu is gone. Tap beer and house wine are $3.50 and there’s an expanded club menu with drink specials. Food is served until 12:30 am.

The crowd is young and the music fresh and eclectic, ranging from jazz to pop, folk, funk, blues and beyond.

Eikmeier explains, “I want to try as many different types of music as I can get away with and still have it fall into that hip, improvised [category]. … I’m working to bring people into the club who wouldn’t necessarily think of the Dakota as a fun, hip place to be on a Friday or Saturday night.”

He wants it to be a destination and also a place “where people walk in the door and say, ‘This is cool, let’s stick around.’ ” Don’t expect the more formal, concert-like environment of some Dakota shows. People come to hear music, but also to hang out with friends and talk.

Along with booking eight shows each month, Eikmeier plays trumpet with Big Walter Smith & the Groove Merchants and occasionally with the Metropolitan Symphony Orchestra. He also waits tables at the Dakota. He’s the guy who’ll give you a thumbs-up if you order Chef Jack’s crab cakes.

Saturday, July 26, will feature the Rossum Electric Company. Kelly Rossum is a jazz musician and composer, jazz director at MacPhail Center for Music and artistic director of its jazz series. He fronts his own quartet and plays with Jazz is NOW!, the Ellen Lease/Pat Moriarty Quintet, the Out to Lunch Quintet and Pete Whitman’s XTet.

He has a few more projects on the way he’s not quite ready to talk about. “It’s the Twin Cities music ethic,” he says. “You have to be in six different bands.” His fourth CD as leader, “Family,” will be released in early August.

The Rossum Electric Company is Rossum on trumpet and electronics, Bryan Nichols on keyboards, Ryan Olcott on electronics and “circuit-bending” (more about that in a moment), and Tim Glenn on drums and percussion.

Anything can happen
“Bryan will be playing the role of bass player and keyboard player and maker of strange electronic sounds,” Rossum says. “I’ll be playing trumpet through guitar electronics — effects, pedals, loop stations.” Loop stations let you record what you play, play it back, overdub it, listen to it backward, speed things up, slow things down — all kinds of tricks. Hear Rossum play “electrumpet” with the group Electropolis here.

Olcott is a member of Mystery Palace, whose MySpace page describes their music as “melodramatic popular song/ghettotech/healing & easy listening.” According to Rossum, “Olcott works in the world of electronics. Circuit-bending is a technique where you physically alter an instrument. For example, you might take an old Casio keyboard, pop the top and rewire the circuitry.” What you get is a new musical instrument and new sounds.

Glenn is the drummer for the indie rock band Fog. Rossum hasn’t worked with Glenn before but considers him an “improvisation monster.”

And pure improvisation. No set list, no charts, maybe not even a rehearsal; they haven’t decided yet. “We all get to experiment with how we play with each other,” Rossum says.

A classical string quartet probably couldn’t take such a relaxed approach to a public performance, but this is jazz. “We all know the sound canvas we’re going to be painting on,” Rossum says. “We can come up with a cohesive piece of art because we’re all coming from the same mindset.”

So what will the music be like, in the most general terms? “Down-tempo, chill. And we might just flat-out rock out at some point in time.”

A bit of local jazz history: Rossum played in the first late-night show on Sept. 9, 2005, with Nichols and bassist Michael O’Brien. He has since returned with various configurations: the Late-Night All-Stars, his own quintet, the J.T. Bates Trio. (The All-Stars play again this Friday, July 18. See below.)

“The late-night series has been a lot of fun,” Rossum says. “It’s all experimental — trying new ideas, new boundaries, no matter what the style. It’s a great venue and I’m glad it’s happening. We need it.”

Chris Morrissey Quartet: Chris Morrissey (bass), Chris Thomson (saxes), Bryan Nichols (piano), Dave King (drums). King is another fine musician who lives in the Twin Cities and plays with a zillion bands. One of them is the Bad Plus. Café Maude, Friday-Saturday, July 18-19, 9 p.m. to midnight. No cover but the best hamburgers in town, along with fancier fare. Make a reservation.

Anthony Cox, Phil Hey and Chris Lomheim: Cox plays bass, Hey drums, Lomheim piano. When I spoke with Kelly Rossum for this post, we talked briefly about the Twin Cities jazz scene. “The great musicians who live and work in Minneapolis are not here by accident,” he said. “They’re here on purpose. … We can play here as much as we want with the finest musicians in the country.” This trio is a perfect example of what he means. The Artists’ Quarter, Friday-Saturday, July 18-19, 9 p.m. ($10).

Late-night Dakota series is a bite of the Big Apple