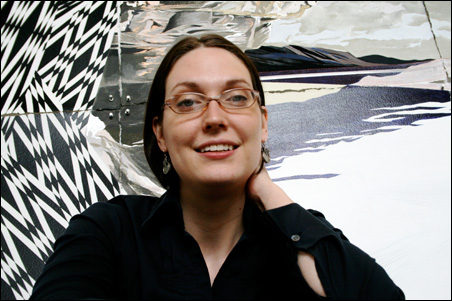 Though it’s the first time in recent memory that an exhibit of works by winners of the prestigious McKnight Visual Arts fellowships features paintings and drawings solely by women, gender’s not the only defining element that binds these artists’ work together.

A central inspiration for the paintings of Stacey Davidson, Amy DiGennaro, Andrea Carlson and Megan Vossler is narrative — be it personal, political or poetic. Their show, opening Wednesday at the Minneapolis College of Art and Design’s gallery, brings to view new takes on portraiture and landscape.

The artists in the exhibit each received $25,000 to spend a year focused on their art. The McKnight Foundation Fellowships for Visual Artists started in 1981; each year about 175 to 200 artists apply, and four artists are chosen.

Artist Stacey Davidson paints colorful portraits — of dolls. Dolls that are themselves creations from Davidson’s hands and imagination. Davidson’s dolls have character; they hint at an intriguing back story and embody very human characteristics — including somewhat ambivalent facial expressions that draw you in, inviting questions and curiosity, just as any good portrait painting might.

Dolls are her sole source material
Davidson has a corps of 42 dolls, and they are her only source material. They are male and female, complete with their own outfits, hairstyles and names, including Rose, Mrs. B, and Stinky. New York-based writer and art historian Lauren O’Neill-Butler calls Davidson’s doll portraits “uncanny” with a “haunting physical presence.” (MCAD commissioned O’Neill-Butler to write essays about each of the fellows’ work, and they are included in the show catalog.)

Davidson uses oil as well as water-based paints to create her doll portraits. This is Davidson’s second McKnight fellowship. Her first was in 1999.

Amy DiGennaro places herself, family and friends into her large drawings that seem like a cross between a landscape and a sectioned quilt pattern. Putting graphite to paper, DiGennaro proves herself a skilled draftswoman who creates several different detailed narratives throughout a single work. Each pattern, inset, and focal point created in a DiGennaro drawing is a story within a story.

“They relate to the history of imagery, of symbolism and legend, and story,” said Makholm. “[DiGennaro] does quite a bit of research in terms of narrative subjects she can resurrect and employ in the mythologies she’s developing in these pieces.”

Another artist in the McKnight show, Andrea Carlson, examines the intersection of Western landscape tradition and Native American objects and legend in her very large but tightly rendered paintings.

For the exhibit, Carlson has painted two wall-sized paintings (mixed media on paper) that allow the viewer to see only a small section of a beautiful lake and shoreline landscape. A black and white textile pattern blankets the outer edges of the painting, obscuring and guiding your eye, so the view is not direct, but deliberately mediated by the body resonance of Native American legend.

“By debunking socially constructed ideals of purity and authenticity with playful narratives and subversive content,” writes O’Neill-Butler, “the distinction between inside and outside is blurred in Carlson’s art … prompting more multifaceted questions than answers.”

Vossler’s starting point for her large graphite on paper drawings are photographs taken by the U.S. Army during the war in Iraq. Vossler translates those images into something more abstract, untethered. Her landscapes are unidentifiable, and yet tell a universal story about humanity and the toll of disaster.

In this show, Vossler also will exhibit plaster casts of backpacks and duffel bags. These objects lying unattended on the gallery floor are a comment on the hysteria surrounding terrorism and travel.

“It’s about a journey,” said Makholm. “Yet if one of these bags was left in a subway or an airport, they would have a sense of threat. Is it simply a child’s backpack? Suicide bombers carrying something like this on their back; it’s about very different journey.”

Each of the artists in the MCAD/ McKnight exhibit shows us something new about narrative, portraits, landscapes, or the interplay and exchange of cultural objects and traditions. “It’s a fascinating, cohesive exhibition,” said Makholm. “Each artist’s work resonates with each other and creates almost a thematic show. That wasn’t the intent, but that’s the result with this group of artists.”

What: Panel discussion with the ’07-’08 McKnight artists
When: July 9, 6 p.m.
Where: MCAD Gallery
Admission: Free