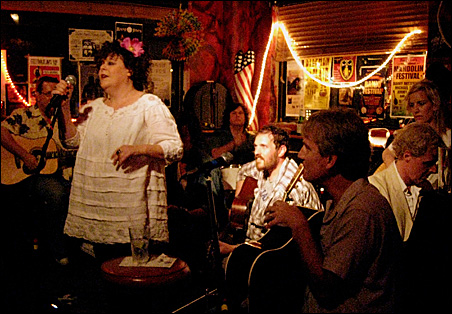 Photo by Alisha Spielmann
Saturday night at Banjo Jim’s: three Hoots in one.

Editor’s note: MinnPost writer Jim Walsh is in New York City for the week, performing as part of his Mad Ripple Hootenanny seven-night stand at Banjo Jim’s in the East Village. He’ll be writing from New York all week.

NEW YORK — My first night in New York I found myself in a bar called the 7-B, which has a great jukebox (punk, soul, lots of Wanda Jackson) and a clientele that favors both beer and absinthe. I, of course, partook for the first time in the big A, complete with flaming sugar cube, hallucinations, drip-dry hangover, and an argument with a Croatian scientist who visited Minneapolis once for three days and concluded that “it is full of rednecks.” But here’s the headline: As I walked the streets back to my pal’s apartment and the refuge of her couch, I came upon no less than 10 couples making out in the streets. Mind you, these were not platonic or even romantic pecks, but full-on-VJ-Day-tongues-down-throat moaners.

Yes, I stopped to watch.

Of course, some of my New York friends shrug at such observations, and maybe they’re right. Maybe this stuff goes on all the time here, but all I know is that at times it feels like the sweltering Summer of Love here. Ironically, it coincides with this discussion about feminism, rape, and sexuality, which has blown up in the blogosphere in the last few days, but it also confirms something that’s in the air, something that’s fomenting in the general populace, something I’ve felt in Minneapolis as strangers nod and smile and make more small talk than I’ve heard in recent years: a feeling that, perhaps, with the most pronounced political/cultural pendulum swing in our lifetime comes a new age of civility that is now translating into mass public displays of affection.

That, coupled with three different conversations with New Yorkers who tell me they’re having more amazing sex this summer than ever has convinced me that everyone in New York is in pre-postwar love mode, making out in the streets and making love in their air-conditioned ratholes high above the sweating throngs. Since all things trendy start in New York, it makes this perfect Midwest gentleman believe the rest of the country will be doing the same in short order. Pass the Absinthe.

HOOT REPORT: The first two nights of the seven-night stand were as different as can be. Friday was a combined Hoot with the Amram family jam. Highlights included New York-by-way-of-South-Dakota songwriter Anna Egge doing a sexy (!) version of “Swing Low Sweet Chariot”; all of Alana Amram’s songs; and my boy Stook! getting straight off the plane from Minneapolis to pull out all the Stook! stops. Pushing-80 Amram family friend Vince, who wrote a tune the Beach Boys covered, helped out on “Homebodies (Don’t Be Careful With Your Love)” to sweet singalong smiles and a concluding vibe that was somehow perfectly summed up by a guy in front wearing a shirt that said, in Icelandic, “This is how I roll.” By the end of the Hoot, the bar was packed and amped for the Amrams.

The Amrams (father David and sisters Alana and Adina) are an incredible story: David is a Beat icon who played on all of Jack Kerouac’s recordings, and an accomplished multi-instrumentalist who plays in a variety of world and jazz combos. At a very lucid-trippy 70-something, he’s an inspiring study in creativity and aging. His oldest daughter, Alana, is an amazing songwriter who writes spare, pretty songs that come with a world-weariness and wisdom that stays with you long after first blush, and her band the Rough Gems kick it with a honky-tonk grit that wouldn’t be out of place at Nye’s or Lee’s Liquor Lounge. Adina is a stand-up comic/singer/freak show who turned in one of the most mesmerizing performance pieces I’ve seen. Difficult to encapsulate, other than to say that she’s insanely funny, fearless, and it’s no exaggeration to compare her to Andy Kaufman, as my friend and roommate for the week Lizz Winstead did.

Saturday was almost three Hoots in one. It started out with Brenda Kahn (playing her first show since last summer’s NYC Hoot); Stook!, and Jim Testa, a rock critic and founder of Jerseybeat ‘zine. The sound system was a nightmare that never quite got figured out, which only led to the frenetic nature of the night. Brenda’s new songs are terrific and  soon to be recorded, as she’s taken a parenting hiatus from the music wars. Stook! again came with it, and at the end of the night let the jammed bar know he’ll be back in the fall for the CMJ conference. Testa’s songs are funny social commentaries — plenty of tunes about the gentrification of neighborhoods and the city, the most poignant of which was “Greetings From Asbury Park,” which takes all the romance out of Springsteen’s fast-dilapidating boardwalk town of yore.

Around 8:30, in walked Kraig Johnson, our old friend of Run Westy Run, Iffy, Jayhawks and now Joseph Arthur and The Lonely Astronauts renown. He was accompanied by Lonely Astronaut bassist Jennifer Turner and drummer Greg “G. Wiz” Wieczorek, who is easily among the most exuberant and generous beat-keepers going. They crammed onto the tiny stage and ripped through one of Kraig’s songs, followed by the entire band and crowd singing along to Stook!’s “A Song Is More Than Just a Song,” which was followed by Testa’s version of Husker Du’s “Songs About UFOs” that Kraig belted out and Jennifer lifted with her lithe runs. Scottish singer Angela McCloskey got up and destroyed the place with two new tunes, Jennifer cat-scratched her way through a solo tune written from a motel room she once called home, Kraig did a psychotic reading of “Freight Train,” and got the whole place to sing the call-and-response.

The night ended with a chaotic “Hey Good Lookin’ ” as actress Heather Graham bellied up to the bar not far from my pals from Minneapolis the Kaiser family, John Swardson, and Lianne Smith. Two down, five to go. Wish you were here.