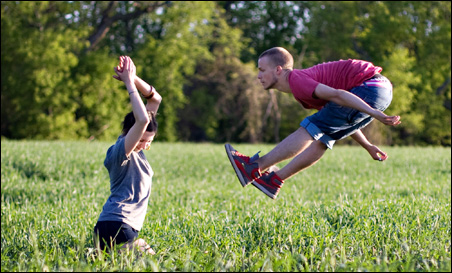 Photo by by Ginger Murray
Kaleena Miller and Ned Sturgis collaborate for “We Live Like This.”

Ah and argh. Every year, I greet the prospect of the Minnesota Fringe Festival — with its plethora of dance and movement-theater offerings — with a mixture of excitement and trepidation. Yes, it’s a fantastic opportunity to see new, often-experimental work from emerging and established choreographers alike. This year, more than 30 dance or movement-based shows are on the schedule.

But because the Fringe isn’t curated and everyone who’s on the docket got there via lottery, it’s truly a mixed bag, with some unknown gem often bursting from obscurity and taking the festival by storm. Several years back, Buckets and Tap Shoes blasted onto the scene with a hyper-aerobic, highly entertaining, robustly performed rendition of funky tap dancing. The show went on to become “Best of Fringe.”

One cool tap chick
Hovering on that show’s fringe, beside the lanky, long-haired, sweaty boys at the core, was one cool tap chick: Kaleena Miller. This year, she’s got her own show, “We Live Like This,” with modern dancer Ned Sturgis. During a sneak preview at the Bryant Lake Bowl’s 9X22 dance showcase a few weeks ago, the two young dancers (who are also emerging choreographers) provided a snapshot of their juxtaposition of fluid, expressive shapes (Sturgis) with careful, quiet tapping (Miller).

The Fringe show is actually a choreographic debut for Sturgis. Best known to audiences as a member of TU Dance, he’s testing the waters with a solo, a duet and a trio. Meanwhile, Miller, who has shown work at the Ritz Theater among other venues, is premiering a tap solo, a quartet, and a work for 11 dancers.

Miniature version of ‘Aida’
Another show on my must-see list is Penelope Freeh’s duet with Stephanie Fellner, “small aida.” Yes, Freeh reports, it’s a miniature version of Verdi’s famous opera, which includes a plastic gold-painted torso as the women’s love interest (when they’re not sweet on each other) and additional music by Johnny Cash. 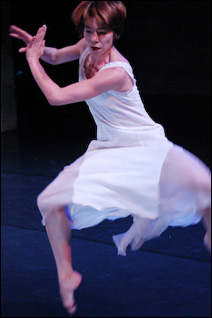 Photo by V. Paul Virtucio
Penelope Freeh says she takes more risks in her Fringe work such as “small aida.”

“Cash is just one of those things that happen in the Fringe,” Freeh explains, with a laugh. During last year’s Fringe, gorilla heads inexplicably showed up in Freeh’s rigorously beautiful dance piece. As a choreographer, says Freeh, who dances with James Sewell Ballet, “I don’t walk around feeling like I’m censored. But in more formal settings, in a JSB concert for example, I would think differently from the beginning of creating a piece.

“When I make something for the Fringe, which is under my own auspices, I feel a lighter sense of just letting my imagination run wild. And I take a big risks I might not normally get to take.” About this year’s “small aida,” she adds, “Life is operatic, and it’s so anti-opera juxtaposing Cash’s music with Verdi’s.”

Fringe tickets
Everyone must have a $3 admission button. Tickets are sold 30 minutes before the start of each show.

Other MinnPost coverage of the Fringe

So very Fringe: hidden gems in 30-plus dance offerings