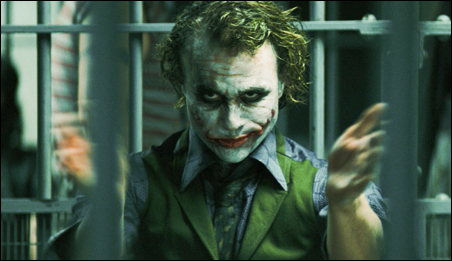 Warner Bros. Pictures
Heath Ledger as the Joker in “The Dark Knight.”

Only a sewer-dweller like the Penguin wouldn’t know by now that “The Dark Knight” will open to a hungry crowd of nocturnal creatures at precisely 12:01 a.m.

“It gets even better” with multiple viewings, says the projection manager at the Minnesota Zoo’s Great Clips IMAX Theatre of director Christopher Nolan’s “Batman Begins” sequel, wherein the late, great Heath Ledger plays his sick Joker not for laughs, but one long, painful grimace.

While eager ticketholders would likely consider the 30-something Johnson to be way lucky, his privilege actually owes to a near-superheroic display of hard work: Johnson spent seven hours last week splicing together the 45 reels of film (!) that collectively make up the giga-screen version of the two-and-a-half-hour “Dark Knight.”

A schedule suitable for the Dark Knight
Good thing he doesn’t have to lift it. But Johnson will need to emulate the Dark Knight’s sleep schedule, since the projectionist will be literally running the show until just past dawn. The 12:01 a.m. screening has been sold out for days, and Johnson reports that tickets are indeed selling for, uh, the 3:15 a.m. presentation.

How will this ordinary guy prepare for such a spectacular feat? Will he wear a cape for the occasion?

“I’ll probably just take a nap before midnight,” he says with a smile. 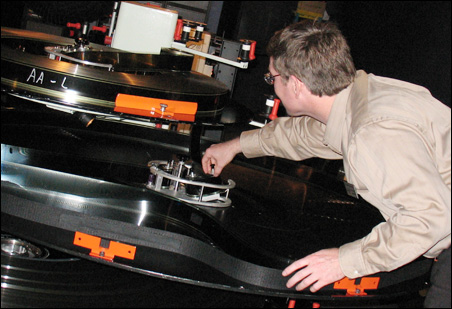 Johnson, a part-time indie filmmaker who started at IMAX as an usher, has been projecting at the theater for years, and says he’s been “pretty much blown away” by everything from “Shine a Light” to “The Polar Express,” along with other films likewise transferred from 35mm film to IMAX. But he sees “The Dark Knight” as a different animal — a milestone in giant-screen history because of the half-dozen scenes that were actually shot on pricey 70mm IMAX celluloid, which allows for roughly 10 times more picture information per frame than 35mm.

“The 35mm [images] blown up to IMAX look really good,” he says just as Monday morning’s “Dark Night” press screening concludes, the massive projector sounding like a semi-truck engine slowly grinding to a halt. “But when you see the footage shot on IMAX, you’re amazed. It pops off the screen. The whole point of all of this is to make you feel like you’re in the [world of the] movie.”

IMAX: more vivid and immersive
This expensive display of film-technological fireworks comes, not coincidentally, at a time when spectacular advances in home theater hardware continue to threaten the commercial viability of the theatrical experience. IMAX isn’t just indisputably better looking than the priciest of private setups, but, with its 15,000-watt bulb and gargantuan picture size, it’s more vivid and immersive than the newest digital projection technology in multiplexes.

Johnson proudly shows me the tube-shaped bulb and gives an example of its power. “You can imagine looking into a car’s headlights, right? The IMAX bulb is 100 times brighter than that.” (Ouch.)

Clearly the studios are investing in IMAX these days just as they invested in Cinerama in the 1950s when the small screen was first big. Johnson rattles off a list of coming attractions that sounds impressive and blockbusting indeed.

But what about older titles? As one who adores Tim Burton’s plenty dark but playful and satiric film “Batman Returns” (1992), I can’t help wondering if there’s any chance of seeing it on the IMAX screen. More than that, I wonder if IMAX could be used to help revive the tradition of repertory cinema in the wake of seemingly definitive news that Oak Street Cinema will soon meet the wrecking ball.

“Old movies are harder to sell to theaters and the general public,” Johnson says with regret. “I mean, I think it would be great to see ‘Brazil’ on the giant screen. But then you’d have me and three other people in the theater.”