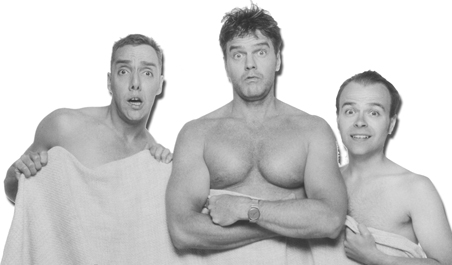 So, maybe you’ve never woken up in bed with two of your best friends and no memory of the night before.

That shouldn’t stop you from relating to the idea of lost evenings and awkward situations.

Such universal appeal — not to mention space for comedy — has led to several successful productions of “3Way” during the last few years. Starting as a Minnesota Fringe Festival show, the play has been revived several times and has toured around the Midwest.

Now show creators Dan Averitt, Jon Mikkelsen and John Trones have taken it to a new level. They’ve added a first act for the run that starts Thursday (Aug. 28) at the Hennepin Stages Theatre under the auspices of 8Ball Theatre, a company formed last year by Mikkelsen and Trones.

The show’s creators describe “3Way” as a farce and a whodunit. Though not a traditional murder mystery, the element of who-did-what-with-whom adds intrigue. “There’s a lot of opportunities for great comedy,” Trones says.

Physical comedy
There’s an emphasis on the physical side of comedy, he says, citing influences like Carol Burnett, Monty Python and the Canadian group Kids in the Hall. Not to mention perhaps the most-famous physical comic: “Jerry Lewis was the king of the pratfall,” notes Mikkelsen.

To heighten that aspect of the performance, the crew hired local performer and director Jim Lichtscheidl to direct the latest production. Lichtscheidl — currently at the Guthrie in “The Government Inspector” and the creator of “Knock” and a bevy of memorable performances — has a knack for physical comedy. All three performers say they are impressed with the work he has done not only to heighten that part of the show, but also to help them refine the new first act.

For his part, Lichtscheidl found a work already in good shape. His role, then, was to mold and refine it and “bring out the physical humor of the show.”

While the show focuses most definitely on gay relationships, the situations have a more universal appeal. The company found that out while on tour in Des Moines. The show’s promoter didn’t mention the “gay” part of the “three way,” and they found the audience packed with “middle-aged straight couples,” Trones says. “But they loved it. Everyone can relate to the awkward situations in the play.”

New venture
This production of “3Way” marks the second venture of Mikkelsen’s and Trones’ own theater company, 8Ball. (The name came after the duo consulted a Magic 8-Ball for advice and were given a positive endorsement. Luckily, they didn’t get a “don’t count on it” response.)

The two see the company as a way to produce their own shows, and to offer more variety to the local theater fare. Their first show, “The 1940s Radio Hour,” was a commercial success last year and will return again this season. “3Way” takes them in a new direction, but one they think audiences will enjoy.

“It really was just a matter of saying ‘let’s put on a bunch of shows,’ ” Mikkelsen says.

And no matter how this run of “3Way” goes, the trio has an international production on the horizon. In December, a version of the one-act opens at the Etcetera Theatre in London. The show is a product of the Internet age. While “3Way” has not been published, it was listed on a website compendium of new plays. The producers in England saw the listing and got in touch. Via email, of course, where most of the negotiations took place as well.

The creators now hope to make it overseas for the international premiere, frequent flier miles allowing.

“It’s extremely surreal to know that our little original adult comedy will be produced on stage in London,” Trones says. “I’ve spent a lot of time in London over the years for work and pleasure, and whenever I have the chance I head to the West End to catch some of the amazing theater that is produced in the U.K. To know now that Londoners will be walking into a theater, purchase a ticket and sit and watch the show that we wrote here for the Fringe Festival a few years back, is such an incredible high.”