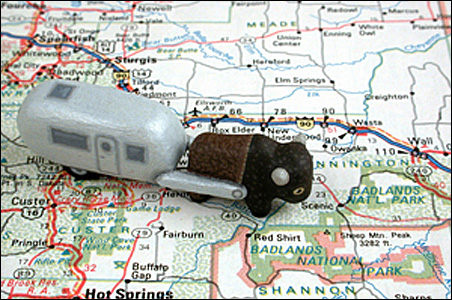 If you ask local artist Steve Tomashek why he does it, why he painstakingly cuts away wood to reveal a mouse so minute it could make a penny its nest, or why he carves mini menageries that could float on Froot Loops, he’d say it’s because he’s obsessed. He has to do it. And lucky for him, he has been able to make a living out of his passion and compulsion, showcasing and selling his woodwork and photos at art fairs around the country.

This Saturday and Sunday, for the fourth year in a row, he’ll be at the Powderhorn Art Fair in Powderhorn Park in Minneapolis along with 180 other painters, sculptors, print makers, jewelry makers, glass makers, photographers, digital artists, woodworkers and everything in-between.

This weekend is the triple-header Minneapolis Arts Weekend, with artists from all over the nation coming here to participate in the Loring Park Art Festival and the Powderhorn and Uptown Art Fairs. As an added bonus, especially with gas prices cutting away at feel-good indulgent purchases like artwork, for example, Metro Transit is providing free rides between all three.

Tomashek grew up with art fairs in his bones. His dad, who creates steel sculptures, has been showing and selling at fairs for a big chunk of his life. He would bring Tomashek, who’d hang out in his booth and later showcased his artwork alongside him. While his dad will be at Loring Park’s art fair this weekend, Tomashek says he’s staying at Powderhorn this year because he likes that is has a local, grassroots vibe.

“I tried different ones,” Tomashek says from his St. Paul home. “But as soon as I tried Powderhorn, I liked it. It seemed more relaxed, and had a lot more local artists. Plus, it’s no-profit, so any money they make off it at concessions and other things goes to programming at the park the rest of the year. I like that about it.”

Little hippie sister on a lake
Indeed, Powderhorn is the laid-back, populist, hippie little sister to Uptown’s more sponsor-heavy big-money machine. The work at Powderhorn is more artisan-created and craft-oriented, made by regional artists, and has an average price tag of around $100. Uptown, which starts today and runs through Sunday, has higher-priced items and reproductions and sells around $2.5 million worth of artwork annually.

“I love that people are coming here and experiencing good things about this neighborhood,” she says. “There were times, back in the early ’90s, that it was pretty rough. People were scared to come into the neighborhood. But we have so much to offer here. We are a unique community. And the art fair helps people see that, I think.” 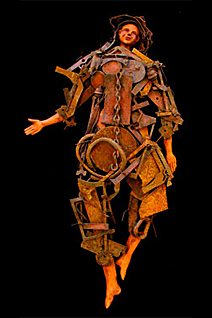 This year, Powderhorn is going green. Thanks in part to a Climate Change Micro-Grant from the city of Minneapolis, this year’s art fair will feature a “green alley” on Sunday that includes energy challenges, kids’ go-green activities, and eco-minded performances.

With 140 artists, the Loring Festival is smaller than the other two but in an equally idyllic setting as Powderhorn. Like the other two festivals, Loring is a juried art fair. And in many ways, it also serves as a grassroots arts festival like Powderhorn. Started by three local artists in 2000 who continue to produce the event, Loring boasts that it sells only about $50,000 worth of art every year. That’s because the trio of artists running Loring have a collective goal of making art affordable. In fact, the main difference between Loring and Powderhorn is that all proceeds from Powderhorn go directly to free community programs at Powderhorn Park.

Do you have that painting in economy-size?
Sotheby’s has certainly been bragging lately. The major art house saw record sales in 2007, and art sales this year continue to rise, it likes to boast to the media. How could that happen, with the economy in such turmoil? It’s actually because the U.S. economy is so unsteady. Wealthy buyers from Russia, China and India are taking advantage of the declining dollar. And major art sales are going through the roof.

But for humble, populist artisans looking to eke out a meager living with their wares, Russian millionaires aren’t exactly lining up. Still, the slowing economy hasn’t slowed Tomashek. In fact, because the economy is in tumult and galleries are forced to close, Tomashek says he’s forced to find more creative ways to sell his work. He has even taken to YouTube, showcasing quick-edit and funny how-to videos to make his work more visible to people outside the fair circuit.

And since he travels to art fairs in places like Chicago and Grand Marais throughout the summer, he also devised a plan to counteract the nearly doubled gas prices.

“Usually when I go to a show in another city, I sleep in the back of my van to keep expenses down. And now in the winter months, I will try to pick up snow shoveling jobs or other things here and there to make ends meet.”

Busse says it’s been up and down for her, too. For the most part, she is finding that people want to support art and the community like never before. “I believe that art is like food for the soul,” she says. “And I’ve been finding that some of the shows have been pretty good this year. Especially in times like these, people are really supporting the artists and finding that they need art. And I believe we all do. It’s good for all of us.”