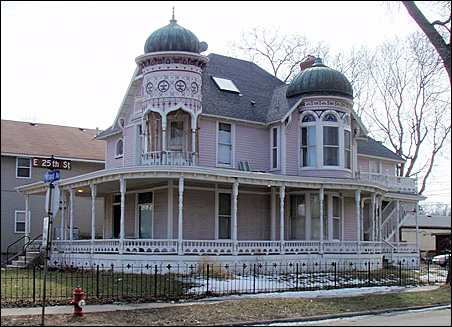 Courtesy of the Healy House

Preservationists are fretting over the fate of the Bardwell-Ferrant House, a Moorish Revival house at 2500 Portland Ave. S. in Minneapolis. Two years ago, the 1883 house sold for $385,000 (minus about $7,700 in owner upgrades). Today, Countrywide Mortgage is trying to unload the foreclosed property for $229,900.

After touring the Bardwell-Ferrant House, which is on the National Register of Historic Places, Realtor Connie Nompelis issued a Preservation 911 on her blog. “Broken newel-post, kicked-out porch rail, cracked, missing and half-pried-away stained glass windows were among the worst atrocities we spied,” she wrote. “And of course three of the four fireplace mantels had been brutally yanked from their walls.”

Nompelis’ blog is called The Healy House because she lives in the Healy Block Residential Historic District, which includes portions of the 3100 blocks of Second Avenue South and Third Avenue South in Minneapolis.

Built in the Queen Anne style in 1883, the second owner of the Bardwell-Ferrant House moved it from its original location at 1800 Park Ave. to 2500 Portland. He hired an architect to create the Moorish Revival facade with what architecture critic Larry Millett describes as “onion-domed towers and a wraparound porch with spindle-work columns.”

Vandals tried to remove a half-circle, stained glass window in one of the onion-domed towers, Nompelis reports. The house is currently configured as a four-plex. Activists are hoping the next buyer is an historic enthusiast who wants to convert it to a duplex or single-family home.

One big problem may be its location in the West Phillips neighborhood. “It’s pretty isolated there,” Nompelis says. “It’s mostly rentals and a lot of boarded-up residences. That can be intimidating to some people.”