BRITT’S BESTS AND BUSTS
An opinionated take on the week ahead in music, Aug. 22-28 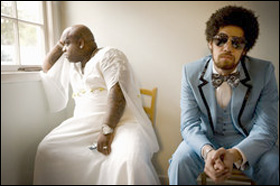 Gig of the week

Cee-Lo Green is a man meant for mirth, a puckish fun-lover with a mastodonic physique who gives as good as he gets in the belly-laugh department — he’s the Fat Albert of hip-hop soul music. He came to prominence with Goodie Mob, who along with Outkast formed the cool, cutting edge of Dirty South hip hop during the mid-1990s. Then he broke away for two deliriously bent solo CDs that fused the social consciousness of backpacker rap with a freaky, prankster’s mentality, united by his high-pitched croon and infectious goodwill.

Danger Mouse is the phantom hero of the beatbox, master of the sonic mash-up, the kid from White Plains who moved to the Dirty South as a teen and fell into cavernous echoes of trip-hop music. His mash of The Beatles’ “White Album” and Jay-Z’s “Black Album” (called, what else, the “Grey Album”) is firmly enshrined in the unofficial DJ Hall of Fame — ditto his beats for The Gorillaz and his collabo with MF Doom (called, what else, “Danger Doom”).

The two got together a few years ago – the short, fat and bald Cackler and the tall, thin and afro’d Twiddler — and came up with the perfect sobriquet, Gnarls Barkley, itself a mash-up of the rotund, irreverent ex-basketballer Charles Barkley and the skater-surfer slang adjective “gnarly,” used to describe something good or bad but above-all notorious.

In 2006 they dropped a single, “Crazy,” of equal appeal to turf-protecting drug-dealers and rat-racing soccer moms. Check it out below. As Danger laces up a stalking beat partially cribbed from the soundtrack to a 1960s spaghetti Western titled “Django, Prepare A Coffin,” Cee-Lo croons a question to the listeners — “Who do you/who do you/who do you/think you are?” — before emitting his trademark cackle and adding, “Bless your soul/you think you’re in control/I think you’re crazy,” repeating the last line three times before sliding in the kicker: “Just like me.”

“Crazy” captured the zeitgeist, as the professors like to say, and became the song of the summer. Gnarls issued a follow-up this May, “The Odd Couple,” that is actually more consistently entertaining than their debut, albeit inevitably bereft of the same commercial wallop. Live at First Avenue last year, the duo arrived with a full band and backup singers in tow and rocked the joint, trading daft for kinetic. Expect the same now that they’re headlining the staid Minnesota Get-Together, with Cloud Cult as the openers. It’s “Crazy” on a stick. Count me in.

As gimmicks go, Junior Brown’s double-necked “guit-steel” — yoking the classic guitar and steel guitar into a single instrument — is an inspired gambit, and neatly objectifies Brown’s slightly spangled blend of Western swing, honky-tonk rock and Nashville-oriented hokum. “Dulcet” is not the first word that comes to mind when you hear Brown’s vocals slip on and off key, but his top-shelf twangin’ and pickin’ is what carries him through, which is why “Sugarfoot Rag,” for example, is always preferable to would-be novelties like “Hillbilly Hula Gal.”

At his best, however, Brown can create sleek, giddy dance music that will inspire two-steppers on one song and fruggers on the next.

No one will ever accuse the Middle Spunk Creek Boys of being slick. Where Brown favors white suits and 10-gallon hats, the Spunkers take the stage dressed like roadies, and play unpretentious bluegrass music that goes well with the ever-miraculous suppers of fresh tomatoes, corn and beans available to us in late August. (Or you can partake in one of Dulono’s fine pizzas with the money you save from the lack of a cover charge.)

The quintet has increasingly begun filtering original tunes beside chestnuts associated with the Stanley Brothers or Bill Monroe. That’s one of the benefits of adding the band’s first Middle Spunk Creek Girl, bassist-songwriter Patti Gilman. The addition of Gilman and the return of banjo player Jim Tordoff after a long absence give leader Alan Jesperson and the rest of MSCB perhaps its finest lineup.

A pint of bitters

If you’re looking for ersatz Irish music performed with more gusto than skill, Gaelic Storm is the worldly bonanza for you. Ever since they were featured in the blockbuster film “Titanic” (a five-leaf clover career moment if there ever was one), this “California-based Celtic group” has seized upon the hackneyed stereotypes of hard-drinkin’ Irishmen and mixed it with mildewed memories of their cinematic revelry, demonstrating incremental, but largely irrelevant, proficiency on their instruments over the years. This blarney-besotted gig will have the critics in the chimp house covering their ears.

Get away from the Republicans

If the anarchists, Ron Paulites and rank-and-file Repubs descending on our cities — like something out of a Ralph Steadman cartoon — don’t send you around the bend, the fatuous media covering everyone’s every move should do the trick.

Why tolerate this human cluster-funk when there is sublime music available free of charge less than a day’s drive away? If you’ve never been to the various festivals in and around Millennium Park in Chicago, this year’s jazz festival is a marvelous intro, with arguably our greatest living jazz artists — saxophonists Sonny Rollins and Ornette Coleman — bookending the schedule with separate concerts on Thursday the 28th and Sunday the 31st respectively.

After watching a tribute to Chicago’s ground-breaking AACM jazz collective and Dee Dee Bridgewater’s tribute to Betty Carter at the Petrillo Music Shell on Friday, hop in the car and head 278 miles to Detroit, where the fest is featuring Ted Nash’s fantastic Mancini Project, the sexy-cool bassist Esperanza Spaulding, Christian McBride’s torrid quartet, and R&B singer Lalah Hathaway (among many other options) on Saturday alone. Book a cheap hotel room halfway between the two cities through one of the Internet discount sites — I got Friday and Saturday for $35 a night at a national chain in Battle Creek, Mich. — so you can be solvent and relatively well-rested on your return to the Windy City to see Ornette.

You’ve got a full week to prepare. Consider the alternative: dumbing down with the bread and circuses of RNC-dom.