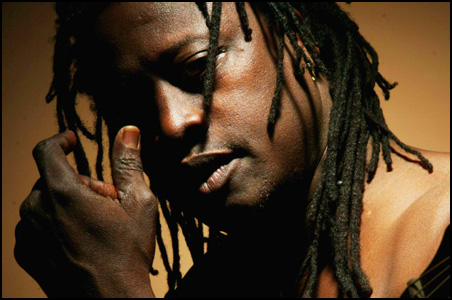 Habib Koité is a different kind of griot. Normally these West African storytellers roar like lions, their pride woven into family lineages that extend back centuries. When they open their throats to sing, the gale of history rises up past their diaphragms. Listen to Salif Keita, the great albino griot, unleash his voice and proclaim his stature, and you intuitively feel that the Keita clan once ruled Mali for 300 years.

Habib Koité does not roar. Although he is a member of the Khassonke griots, he sings his stories with soothing amiability, inviting you in, beguiling you with the implicit notion that the song he sings may be your history too.

“My family [up] through my grandfather, they all play n’goni [a four-stringed African lute]; they don’t do another job. My father changed the line; he go to school, played guitar, accordion, and in modern times,” says Koité, who turns 50 this year. He is speaking by phone from a Pennsylvania hotel room, where he is on tour with his sextet, Bamada, who will play tomorrow night at the Cedar Cultural Center.

A few years ago, the great Malian kora player, Toumani Diabaté, assembled the Symmetric Orchestra to resurrect the spiritual memory of the Malinka Empire of the Mande people, which once ruled over much of western Africa. Koité, who has played guitar and sung with Diabaté, has no problem saying, “I am Malian, and my music is inspired by the diversity of music all over Mali. All my band is from Mali.”

Malian, but different
Indeed, “Bamada” is slang denoting a group of citizens from Bamako, Mali’s capital city. But Koité is also plainspoken about how his approach is different from that of his friend Diabaté.

“I am not from the 10th or 11th century, when Malinka Empire was,” he states. “I am years 2000. I go to school for classical music and jazz music, and I like too much to listen to other music from England and Japan and soul music from United States, Detroit. I listen and try to play those types of songs. This is my own experience.”

His parents wanted him to go study engineering; it took the pleadings of a vociferous uncle before they let him enroll in the National Institute of the Arts in Bamako. Within six months, he was leading the school’s orchestra, and eventually taught there for six years, until forming Bamada in 1988. Honoring his grandfather and father both, he taught himself guitar and a way of tuning it that makes the instrument sound more like an n’goni.

Winning international competitions in France helped him record first a few songs and then an entire album. World tours eventually followed, prompting adulation and advocacy from American peers such as Bonnie Raitt and Jackson Browne, transforming Koité into one of the world’s best-selling African musicians.

Multiple influences
“Afriki,” Koité’s fourth CD of original material and his first in six years, was released 11 months ago, and is an organic embodiment of his pancultural aspirations.

“I love this album,” he says unabashedly. “It wasn’t easy to do. I tried some new things with different stringed instruments. There is a song [“Nta Dima”] with six hunting horns. There is another with a sax player from England.” Another song  [“N’Teri”] has a quartet of violins from Belgium. The fruits of Koité’s study of the blues and flamenco styles with Afro-Cuban teacher Khalilou Traoré are also apparent.

But for all of that, “Afriki,” as its title suggests, retains a distinctively African, and specifically Malian, identity. The crucial difference is Koité’s ability to engage other cultures. Early in Salif Keita’s career, it was a musical train wreck when French producers tried to gussy up his arrangements with Western-style glitz, and the marvelous griot remains at his best when he is in exhortatory vocal mode. Toumani Diabaté has recorded with everyone from Blur to Bjork to The Gorillaz to trombonist Roswell Rudd, but these collaborations, as good as they are sometimes, come off more like summit meetings, a ceremonial exchange of gifts, rather than desiring an abiding commitment.

By contrast, Koité is submerged in his fusions. The song “Africa” may feature a jazzy, Latin-inflected horn arrangement from Pee Wee Ellis (who has done charts for James Brown, Van Morrison, and many jazz artists), but the fulcrum of the song remains the interplay between Koité’s guitar, the balafon of Kélétigui Diabaté and Mahamadou Kone on the talking drums. Those three have been together for well over a decade, and Koité and Kélétigui Diabaté were playing jazz together with a French keyboardist back in 1984.

The telepathy among the members of Bamada is what you might expect of a sextet that has experienced few personnel changes over 20 years. Live, over the elastic braid of their interplay, Koité’s voice alternately smoothes and scuffs the lyrics as if brushing them with suede. He’s a global griot for the 21st century.