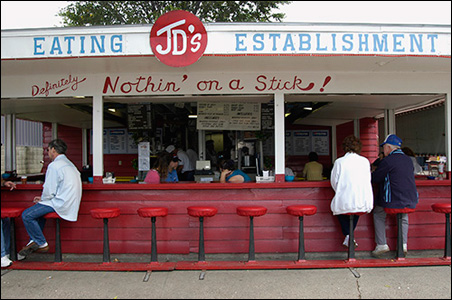 Last year, 1,681,678 Minnesotans attended the State Fair. That means 3,485,423 stayed home. So, which bunch had the better idea? That depends on your tolerance for grease and crowds, or perhaps on your sense of nostalgia.

Is going to the Fair actually fun, or is it just supposed to be fun? I’m not really sure, although this year, as I envision navigating small children through throngs of zombie-like people wielding trays of cheese blobs boiled in fat, I’m thinking I know the answer to that question.

Or maybe not. Susan Lambert Miller’s new book of photography is giving me second thoughts. “State Fair: The Great Minnesota Get-Together,” published by the Minnesota Historical Society Press, makes the Fair look pretty appealing. If you’ve been to the Fair, you’ve seen everything in this book: The ferris wheel at night, the butter princesses, Tiny Tim’s mini donut stand, livestock, junk on a stick — it’s all in here.

But the thing is, Miller’s uncynical eye captures the oddball humor, uncommon friendliness and amazing history of this shindig without exposing the icky stuff. There’s not a tube top or a heap of Styrofoam drink cups anywhere in here; Miller’s Fair is as wholesome and old-fashioned as a bottomless cup of milk. If the Fair was like this off the page, I’d go tomorrow. And it can be, she says — if you go early enough.

She learned this the hard way, after getting shut out by traffic the first time she tried to visit, a few years ago. After she figured out how to get in, she hardly left, visiting on about half of the Fair’s open days and photographing everything that seemed to sum up why, exactly, people would want to come to the Fair. “It’s really neat being there early. The food is just starting up, people are exercising their animals in the street, a lot of kids sleep in the barns with their animals, and they are all getting up. The energy is really different, quiet.”

Colleen Sheehy’s “Seed Queen: The Story of Crop Art and the Amazing Lillian Colton”  came out last fall, and this sassy history chronicles how the Fair’s hokiest craft became its hippest attraction, under the guidance of Owatonna hairdresser and crop artist Colton, who died March 20, 2007, at the peak, some would say, of her popularity. Colton’s obsession with celebrities predated the US Weekly phenomenon by decades, and helped endear her work to a new generation of seed artists. (MinnPost’s coverage of “Seed Queen” is here.)

“Minnesota State Fair: An Illustrated History” by Linda Koutsky and Kathryn Strand Koutsky (with an introduction by Garrison Keillor)  was published by the Coffee House Press in September 2007, just as the Fair was winding down. This book compiles a vast array of photos, drawings, anecdotes and histories from the State Fair, chronicling early days and current traditions. It even includes a hefty section of recipes, enabling the ambitious reader to create some of the smells and tastes of the Fair at home. This book, plus a bag of manure, and you won’t be missing out on too much. 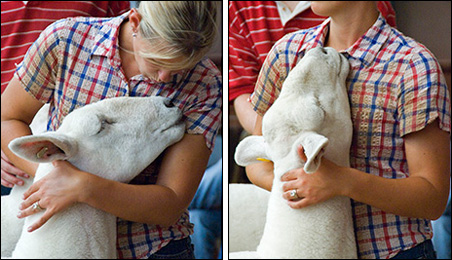 Why the sudden focus on fairs? Miller thinks it’s because some fair traditions, and some fairs, are dying out. Her next book will document Minnesota’s smaller county fairs, and she’s visited dozens of small fairs around the state, photographing 4-H competitions, bingo games, tractors and towns that are changing too quickly. “This is cultural history, and in a lot of places it’s going away as the culture changes,” she says.

She has visited several other states’ fairs, and says we really do have the best one.

“The Minnesota State Fair has really hung onto its agricultural roots, and that brings so much character to it all. There’s a lot of pride and a sense of community,” she says. “Texas tries to tout themselves as the biggest, but they’re open for 24 days, so that’s not a fair comparison, since they are just talking attendance numbers. But it’s not like our Fair. It’s a big shiny fairground with a lot of cars, and it just didn’t impress me.”

Too crowded at the Fair? Read all about it instead