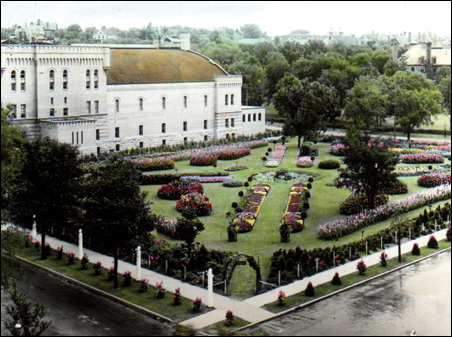 Courtesy of the Minneapolis Park and Recreation Board
The gardens next to the National Guard Armory at the corner of Kenwood Parkway and Lyndale Avenue were created in 1913. The Minneapolis Sculpture Garden now occupies that land.

When the St. Paul Pioneer Press assigned me to work in the Minneapolis bureau about a decade ago, one of the first tasks shoveled off on the new guy was covering the Minneapolis Park and Recreation Board.

Well, the meetings were often dramatic — though just as often I felt like I was listening to my arteries harden. Lost in the minutiae of details, at least to me, was the sense of the unique — even extraordinary — place of the park system in the character of Minneapolis.

This year marks the 125th anniversary of the state legislation that created an independent board of park commissioners for the city, with dedicated tax-supported funding. This arrangement is rare and it’s often criticized — usually by local politicians who grouse at the reality of nearly one-sixth of their city being controlled by an independent entity. To many, that one-sixth is the best part, too.

But a lot of people think the governing arrangement is why the park system is as good as it is. Among them, not unexpectedly, is David C. Smith, a freelance writer who was commissioned to write “City of Parks: The Story of Minneapolis Parks,” to mark the 125th anniversary. 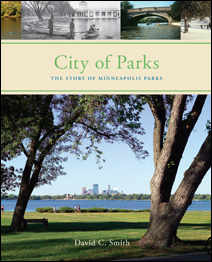 The book commission came from the Foundation for Minneapolis Parks, a nonprofit group organized five years ago to promote private contributions to the park system. This buffer-zone arrangement for the book suggests one reason why there hasn’t been a history published about the park system since Theodore Wirth‘s 1945 history, published a decade after the legendary park superintendent retired and shortly before his death.

I have a rare, pristine copy of Wirth’s history, which was signed by the author before its original owner apparently placed it on a shelf and forgot about it. It’s a wonderful book to look through, filled with marvelous old photographs and fold-out diagrams on onion-skin paper. But the writing is a turgid recitation of obscure names and dates, and it’s fortunate that it has an index in the back to make it a great reference book.

Uncommon foresight
Smith’s book is much more reader-friendly. It’s slightly smaller than a coffee-table book, copiously illustrated, and its focus is less on minutiae than on major turning points in park history and on the unique, often outsized personalities of the people who brought them about.

Author Smith rattles off some descriptive statistics at the start of the book that ought to impress any casual patron of the parks:

• The system includes 6,400 acres in 182 properties, including 12 lakes, a major portion of the Mississippi River (though the commissioners covet more of the riverfront north of Broadway) and three significant tributary streams.

• The park board also owns hundreds of thousands of trees, including those lining the streets of the city.

• And although this isn’t generally known, the park board also holds the deed to part of Minneapolis-St. Paul International Airport. Reason: The board created the first airport on the site of the current aviation complex. 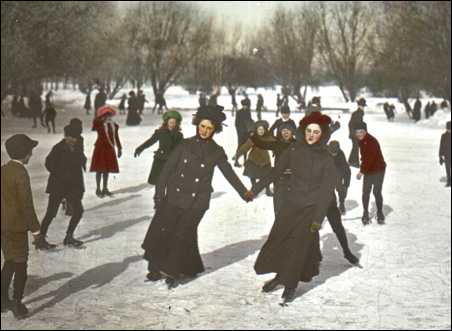 Courtesy of the Minneapolis Park and Recreation Board
Skaters in Van Cleve Park in 1901. The image was taken from a hand-colored, glass lantern slide typically used for presentations.

The players in Smith’s park history include people who have become park names: Maude Armatage, Eloise Butler, George Brackett, Francis Gross and many others.

But the triumvirate of major visionaries, according to Smith, includes landscape architect Horace Cleveland, who had a crusader’s zeal and a spiritual belief that nature — carefully adapted, of course — could civilize the human soul. He was joined by businessman and politician Charles Loring and by University of Minnesota President William Folwell, both eminently practical men. All three were visionaries.

“The pioneers had the right idea — get the land and adapt as you go,” Smith said. “Over time, the use of park lands changed quite significantly, with an uneasy balance between passive and active recreation. To Cleveland, there didn’t seem to be a need for places for people to exercise — not when they worked 10 or more hours a day, six days a week.

“What they needed was a place to relax — the Emersonian notion about the benefits of nature. Games didn’t have a role until the late 1890s, and the first playgrounds were built in 1906. But one of the lessons of park history is that people use the land as they want to. There have always been contentions about how parks should be used, but it’s nice to fight over land we own.”

Ownership of the waterfront
One of the most unique features of the park system, Smith believes, is ownership of waterfront. “Nearly ever foot of land that borders water is owned by the park board,” he notes.

Even that involved some serendipity, Smith says. Loring managed to get William S. King — another of the city’s most interesting characters — to donate the waterfront around Lake Harriet and most of a swamp that later was dredged into Lake of the Isles. 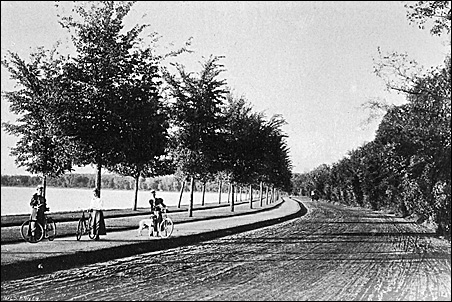 Courtesy of the Minneapolis Park and Recreation Board
The dedicated bicycle path around Lake Harriet in the 1890s was similar to the modern arrangement.

“That set the acquisition of the lakes in motion,” Smith said. “Getting Lake Calhoun seemed like the smart thing to do and when people saw improvements to the lakes, they wanted the park system to include others — such as Hiawatha and Nokomis after the city expanded south.”

Interestingly, Lake Harriet is the only major park lake that wasn’t substantially engineered. Indeed, the “City of Lakes” subtitle for the city would have been “City of Marshes” or “City of Sloughs” if the kind of environmental engineering — largely abhorrent today — hadn’t been done.

“Wirth wanted to alter Lake Harriet, too, by building a peninsula into it,” Smith said. “He thought the shoreline was boring.”

This brings us back to the unique governing system for the Minneapolis parks system. Smith believes it’s the reason for the parks we have today.

About 4,000 copies of “City of Parks” were printed in its first run. The book is being sold online, at the board’s headquarters at 2117 West River Road in Minneapolis, and at Love from Minnesota stores. The hardcover price is $39.95.