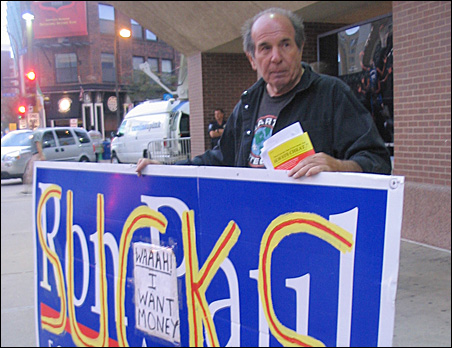 Just before Ron Paul took the Target Center stage Tuesday night for his alternate convention, a lone protester stood outside holding a giant Ron Paul campaign placard with the word “sucks” written across it in tape.

Longtime local activist-crank Leslie Davis stood there, propping his sign and holding a mini Jesse Ventura doll with its own little sign mocking the former Minnesota governor and Navy SEAL: “ALL BLUBBER NO SEAL.” (Davis contends that Ventura was never a SEAL.)

Davis didn’t escape ridicule either, as passing Paul supporters hurled scornful rhetorical questions about whether he was a fascist, socialist or in the employ of the GOP.

Davis, a former Paul supporter, says he abandoned the Texas congressman’s insurgent “Campaign for Liberty” when it was announced that Ventura would be one of the featured speakers at last night’s rally. 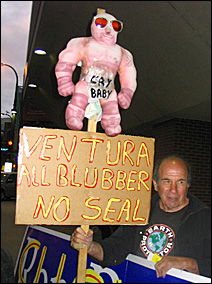 Davis, who occasionally runs for political office, has a laundry list of complaints against the former pro wrestler: Ventura insulted overweight people, he told single mothers that they were on their own, he bribed his way into office, and so on.

Details galore can be found in Davis’s book “Always Cheat: The Jesse Ventura Philosophy,” available at his website.