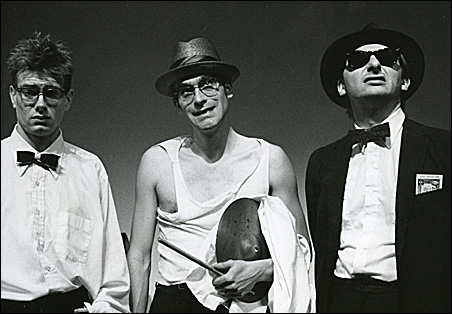 Maybe so. There certainly is more going on right now than one person can hope to see. That, I believe, is a good thing even if it leaves my evenings pretty much locked up for the foreseeable future. After mainly slumbering through the summer (with a few notable exceptions, like the Fringe Festival) the Twin Cities theater scene tends to erupt in September, as everyone gets back to business. Here are but a few of the offerings.

Bad Jazz: ‘Tickled Pink’
For a quarter century, Bad Jazz has not just explored the intersection of music, storytelling and theater, but gleefully pummeled it. Starting from a busking experiment while on tour with Heart of the Beast Puppet and Mask Theatre, the trio — Kevin Kling, Michael Sommers and Loren Niemi – has produced a string of shows through the years presented in theaters, as an exhibit at the Walker Art Center, a tent revival and in an abandoned railway depot.

“Tickled Pink” finds them performing at Open Eye Theatre in Minneapolis. Describing a show is a bit difficult, so we’ll let the press release do the talking: “An evening of Americana arriving from another time packed with stories, street-corner preaching, catfish, barbecue and Bad Jazz.”

‘Vinegar Tom’
Meanwhile, the always engaging Frank Theatre returns with “Vinegar Tom,” an early work by renowned playwright Caryl Churchill. Set in the 17th century, the play tackles the persecution of witches and draw connections between that era and modern days.

And for those who have trouped out to idled factories and industrial sites for previous Frank shows, you will be happy to hear that “Vinegar Tom” is at the Ritz Theater, located in the heart of the trendy northeast district of Minneapolis (345 13th Ave. NE, Minneapolis). The show runs through Oct. 5. Tickets are $20 to $25. Call the Ritz box office at 612-436-1129 or go here.

‘A Life in the Theatre’
The Jungle continues a stellar 2008 season with a revival of “A Life in the Theatre,” David Mamet’s two-character play about the art of acting. The show features Jungle Artistic Director Bain Boehlke, who plays Robert, an older actor who has taken John (Robin Everson) under his wing. “A Life in the Theatre” runs Sept. 19-Oct. 26 at the Jungle, 2951 Lyndale Ave. S., Minneapolis. Tickets are $26 to $36. For more information, call 612-822-7063 or go here.

‘The Sisters Rosensweig’
Park Square Theatre opens its 2008-2009 season with “The Sisters Rosensweig,” one of the later works by famed playwright Wendy Wasserstein. It’s the second major production of Wasserstein’s work this year, following “Third” earlier in the season at the Guthrie (both shows share an actor as well — Kathryn Lawrey).

The play follows a trio of sisters trying to cope with the complexities of everyday life, including aging, children and unwanted birthdays. “The Sisters Rosenweig” runs through Oct. 5 at the Park Square Theatre, 20 W. Seventh Place, St. Paul. Tickets: $20-$39. For more information, call 651-291-7005 or go here.

More chances for ‘Fences’
Finally, if you haven’t taken in Penumbra Theatre’s masterful version of “Fences” yet, you now have more chances. The company extended the run of the show for an extra month, with the show now closing Oct. 19.

What have you missed? Well, there’s the masterful interpretation of a terrific August Wilson play. There is Lou Bellamy’s measured direction and a stunning set from C. Lance Brockman. There’s the terrific cast hitting all the right notes. And to top it off, you have a stunning turn by James A. Williams as Troy, the former ball player turned garbage man. It’s as good as anything I’ve seen in the Twin Cities in the past three years, and now there’s no Republican National Convention, State Fair or other excuse to get in the way.