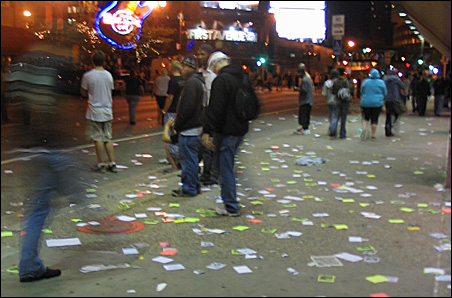 MinnPost photo by Michael Metzger
The scene outside Target Center after the crowd dispersed Wednesday night.

The numbers look bad — 102 arrests outside the Target Center after last night’s Rage Against the Machine concert — but the reality is that the post-concert crowd was mostly peaceful, if boisterous and sweaty after a typically raucous show by the polemic rap-metal icons.

The overwhelming majority of those arrests consisted of tickets handed out by Minneapolis police officers to concertgoers who were then let go.

Only two of the 102 arrests were for gross misdemeanors, according to Lt. Tracey Martin of the Hennepin County Sheriff’s Department and Joint Information Center. The rest were for misdemeanors. Fifteen of those arrested were booked into Hennepin County Jail, Martin said. Two remained in jail as of Thursday morning.

The arrests “were mostly [for] unlawful assembly and obstructing traffic,” Martin said. One of the two still being held is there on charges of fourth-degree assault, the other for obstructing legal process.

The approximately 13,000 concert attendees spilled onto the street about 10:30 p.m., with lots of shouting and fists being pumped into the air after the show by Rage Against the Machine, a group famous for delivering leftist politics in an angry barrage of punk and rap-metal.

“These aren’t the people in downtown St. Paul causing trouble,” said concertgoer Jesse Garcia, of Minneapolis. “These are just people here to hear music and have fun.”

Concertgoers and dozens of riot-gear-equipped police officers armed with batons and tear gas, including a line of mounted officers, quickly faced off at the corner of Sixth Street and First Avenue. After about 30 minutes, an order was broadcast to the crowd to disperse. Much of the milling crowd slowly retreated, with scattered shouting toward Seventh Street and other outlets from the area.

Squads of cops on motorcycles, bicycles, horses, in police cars, unmarked vans and on foot headed away from the Target Center, one by one, up Sixth Street. It wasn’t clear where they went after leaving the area immediately in front of the stadium.

Most of the arrests took place around midnight, Martin said, in the area of Seventh Street and Second Avenue. She said she didn’t know if an incident occurred there to trigger the arrests.

The area immediately in front of the Target Center appeared to have been cleared by approximately 12:30 a.m., with little more than abandoned sweat-soaked T-shirts and thousands of fliers for various events covering the streets and a few remaining cops.