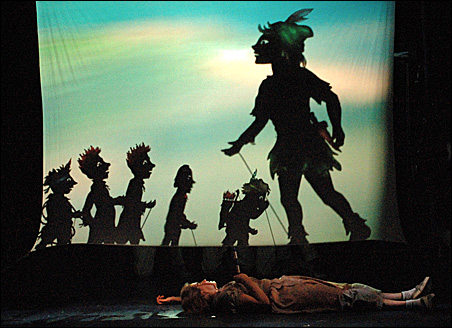 It’s not every day you get offered the chance to ride a German wheel.

Yet over the past few weeks, the circus apparatus has become a popular fixture in the Children’s Theatre Company rehearsal room, as the company actors — and more than a few administrative types — have taken a spin. (In the end, I chickened out, probably thinking of how I would explain this at my day job if I got injured.)

You could easily hear the enthusiasm in artistic director Peter Brosius’ voice as he described his own time inside, just as you could hear it when he described the reason why it — and a bevy of other devices — was at the theater.

“Our main goal is to ‘do no harm,’ ” Brosius says of these collaborations, which often involve companies that are much smaller than the Minneapolis-based CTC.

“We learn so much,” Brosius says. “We learn other ways of doing things, and about other artists and cultures. It gets us out of our comfort zone.”

To go back to the German wheel for a moment. While the CTC folks enjoyed their spins, the real amazement came when the experienced performers from the circus got their turns. “They can stop them on a dime,” Brosius says.

And while CTC performers, creators and staff broaden their own talents (“We had to build a puppet shop for ‘Peter Pan,’ ” Brosius notes.), the collaborators get a chance to produce with a Tony-award winning theater and learn how an often-larger organization does its work, he adds.

Origins
Through the years, CTC has done numerous works with outside companies. For Visible Fictions, Brosius first saw the company’s work while in Europe. After that, he invited the creator to CTC for a few days to discuss possible shows. Nothing had come up until “Dougie literally had his bags in his hands and was headed to the airport. I said ‘Peter Pan,’ and he dropped the bags.”

The appeal for Irvine was clear on a number of levels, not the least being a chance to do a classic work by a fellow Scot. His intent was to go back to J.M. Barrie’s novel for inspiration. In the end, that decision gave the CTC production a different feel than many previous Peter Pan’s — one that’s a bit more melancholy, and also one that shows that the torn desire to be a child forever and the one to grow up and become an adult never stops.

The shadow puppets brought an extra dimension to the process that again expanded the skills of the actors. Though some had experience via local company Open Eye, the others “had to become puppeteers,” Brosius says.

A night at the circus
For “Madeline,” the collaboration was closer, but born of an equally visceral experience. “I went to see a Cirque du Soleil show and didn’t feel anything. It just left me cold,” Brosius says. “Later I went to see Circus Juventas, and was just captivated by what they were doing. It felt like an old-time circus. I was moved by it.”

Of course, bringing a circus to CTC makes for some adjustments. After all, while theaters often “fly” scenery from above, it’s quite a different proposal when you are setting up a trapeze.

And the rewards for both companies are clear — something Brosius saw as the Circus Juventas performers began to integrate their work with the CTC actors. The actors had stood in during the early rehearsals, and even the youngest members of the cast had a sense of ownership — and were eager to help the new performers to learn their places within the script.

All of that offers new opportunities as well. CTC vet Dean Holt plays the Clown in the show and had ideas from the get go, which only increased after he went to Circus Juventas for training, Brosius says.

“Wait until you see what he does with the German wheel,” Brosius adds.