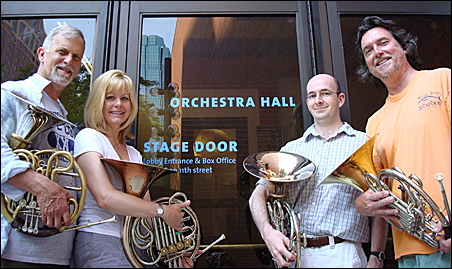 All things are linked. Take, for example, the Colonial Church Chamber Series that begins its third season on Sept. 28 with a concert involving top musicians from the Minnesota and St. Paul Chamber orchestras.

The inspiration for these concerts, beyond the usual musical aspirations, involves connections with a century-old international movement that is now called Initiatives of Change. And it draws inspiration from two recent catastrophic events: the Rwandan genocide of 1994 and the devastating Indian Ocean tsunami of 2004.

Here’s how those connections interlaced in the life of Ellen Dinwiddie Smith, who sometime calls herself the “one with the long blond hair” in the horn section of the Minnesota Orchestra. She’s been a member of the orchestra since 1993.

Smith is married to Mark Russell Smith, who heads the new music series for the St. Paul Chamber Orchestra in addition to being director of Orchestral Studies at the University of Minnesota’s School of Music. They live in Edina with their two sons, Alexander and Noah.

Two big events occurred in Ellen Smith’s life in 2006. She organized a concert at the Colonial Church of Edina to raise funds for tsunami relief and she traveled with her family to Caux, Switzerland, to perform at an Initiatives of Change conference.

“At the conference I met a woman from Rwanda who had lost her entire family — and almost everyone she knew — in the genocide,” Smith recalled. “She told us that at first she had been upset about still being alive. She asked God, ‘Why leave me?’ And then she started an orphanage and realized that there was a plan and a purpose for her. It was very inspiring.”

Back home, the tsunami relief concert was a great success. Smith said it gave her satisfactions that were different from performing with a top-ranked orchestra. “It involves doing what you’re doing in the community — a direct feeling,” she said. “It’s a direct purpose.”

From the start, Smith insisted that even though she wouldn’t get a salary, the musicians performing in the concerts would be paid for their services. “It’s not great pay, but they do get paid,” she said.

The other inducement is a chance to have a voice in deciding what they’ll play. “If you’re an orchestra musician, you don’t get that opportunity very often,” Smith said. “Orchestras are pretty much a dictatorship.”

Low pay (and the in the case of Smith, no pay) keeps the ticket prices down — $75 for five concerts this season, or $15 for one performance. Kids are free. “It’s important that young people come and hear music,” Smith said.

When you think of chamber music, you typically think of string quartets or piano quintets. Smith said she has tried to add more variety to the Colonial Church series.

Another work on the program is John Corigliano‘s memory piece, “Snapshot-Circa 1909,” for string quartet that was inspired by a photo showing Corigliano’s father and uncle playing guitar and violin when his dad was about 8 years old. Corigliano is one of the best-known and eclectic of America’s contemporary composers, with a Pulitzer Prize for his Second Symphony and an Academy Award for his score for the film, “The Red Violin.” (You can listen to the “Red Violin” score here.)

Another highlight of the concert series includes a performance in February by Minnesota Orchestra Music Director Osmo Vänskä in his other vocation as a clarinetist. The program hasn’t been announced, but it’s expected that Vänskä will be joined by other members of the Minnesota Orchestra.

In May, the series concludes with a bash: “Hornucopia.” It features “Casbah of Tetouan,” by Kerry Turner, plus works for a full chorus, a variety of horns — including long Alphorns — and organ.

“It’s going to be a big one,” Smith predicted.

And all of it on a shoestring. As a publicist, Smith said she’s trying to teach herself the skill of building a webpage. “My kids — they’re 12 and 14 — are better at this kind of stuff than I am,” she admitted.

Meanwhile, ticketing and information are being handled the old-fashioned way: By calling 952-432-3471.

All performances are at 7 p.m. at the Colonial Church of Edina. Here’s a rundown of the season:

Sept. 28 — “An Evening with the Turnia Quartet,” plus Corigliano’s “Snapshot-Circa 1909” string quartet, and Beethoven’s Sextet.

Feb. 15 — “Osmo and Friends,” featuring clarinetist Osmo Vänskä and members of the Minnesota Orchestra. Program to be announced.