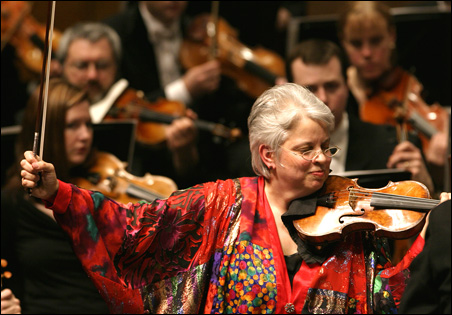 Courtesy of the Minnesota Orchestra
Jorja Fleezanis in performance.

The first female concertmaster in the 105-year history of the Minnesota Orchestra announced on Tuesday that she will leave her post in June after two decades and accept a position on the faculty of the Jacobs School of Music at Indiana University.

Since 1989, Jorja Fleezanis has been a popular and vibrant force within the Minnesota Orchestra, championing new music and spearheading a collegial yet disciplined atmosphere among the 98-member ensemble. The concertmaster is an orchestra’s lead violinist and traditionally regarded as second in command after the music director.

Fleezanis was brought to Minnesota by then-music director Edo de Waart, her former colleague at the San Francisco Symphony, where she was assistant concertmaster. She has also served under Eiji Oue, and, for the past five years, current music director Osmo Vänskä.

Highlights of Fleezanis’ tenure in Minnesota include the world premiere of two violin concertos composed especially for her, and the orchestra’s high-profile recordings of the Beethoven Symphonies under Vänskä. Away from the orchestra, she also performed and recorded Beethoven’s 10 sonatas for piano and violin with Cyril Huve, and said yesterday that the move to Indiana will allow her to pursue more solo and small-ensemble opportunities while freeing her from the enjoyable but rigorous demands of her concertmaster duties. “No doubt there is a certain quality of liberation here,” she says.

Pursued by IU for several years
Fleezanis revealed that Indiana University has assiduously pursued her since her initial visit to work with the music faculty four years ago. Indeed, on the ride back to the airport the university’s string department chair, Lawrence Hurst, sent “a clear message that they were interested in my coming there. That planted a seed,” says Fleezanis.

Jacobs School Dean Gwyn Richards confirms that “it was love at first sight” between Fleezanis and the faculty, and that “we immediately began to dream of having her here.” Jacobs, regarded as one of the finest music schools in the country, has added such luminaries as conductor Leonard Slatkin, pianist Andre Watts, and violinist Joshua Bell to its faculty over the past four years. And a new state-of-the-art music faculty building is being constructed on campus via a $44 million endowment from the Lilly Foundation.

While congratulating and praising the 56-year-old Fleezanis on her new appointment, Vänskä says that he will be putting together an audition committee and embark upon “a thorough audition process” to select a new concertmaster. Fleezanis’ final appearance in her current position will be in mid-June, appropriately playing Beethoven (“Missa Solemnis”) with Vänskä at the baton.