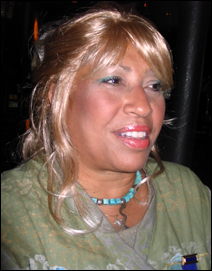 Barb Davis White sits on the edge of mainstream Republican politics, literally and figuratively, as she perches on a stool at Centerfield Bar and Restaurant, at the corner of Second Avenue N. and Fourth Street N., the night before the convention opens. To the south, on First Avenue, big parties feting Republican stars are being held all week, paid for by lobbyists and corporations eager to pump the hands of convention delegates.

Turnout for White’s convention kick-off party is, to be generous, sparse. Fewer than 10 people showed up, yet the ordained pastor, mortician and author talks about her candidacy as if she’s riding a crest of popularity.

A change in plans
“I’m definitely going to win,” she says with a big smile of confidence. “I have no question in my mind. When I walk and knock on doors, all I’m hearing is ‘drill our own oil.’ That’s all I’m hearing.”

She says voters are eager for new ideas to lower the price of gasoline and the cost of government, reduce taxes and crime, and bring jobs into Minneapolis and its suburbs in the 5th District.

One of the problems with her candidacy might be that she has few plans to bring about the big changes she’d like to see.

When asked whether she’d submit a plan to Congress to reduce income taxes across the board or would favor targeted cuts, she talks instead about launching an investigation into where tax monies go.

When asked how she’d lower crime in Minneapolis, where she lives in Northeast, White says she’d speak out against it in neighborhood meetings and use the bully pulpit Ellison has forsaken.

She proposes unspecified tax incentives to lure businesses to the area, though she is clearer on a couple of subjects: She supports controversial plans to drill for oil in Alaska’s Artic National Wildlife Refuge (ANWR) and she is staunchly pro-life.

Claims and support
White says abortion is genocide being carried out against “black people and poor people” in the United States.

“When you talk about black population going from 20 percent in the United States to 13.5 percent, in 2040 the black population doesn’t even register when it comes to the census,” she said. “I believe genocide is happening. I believe it is systematic genocide.”

Despite her dubious claim and lack of specific plans and elective experience — she’s never held office before — White has at least one part of what makes for successful candidacies down pat: She has a warm smile, an extroverted, buttery personality and the ability to focus in a discussion as if the other person were the only important being in the world at that particular moment.

Whether those qualities can carry her to the halls of Congress is doubtful.

Her campaign manager, Don Allen, complains that the Republican Party is offering White no support, financial or otherwise.

“They’re not even willing to budge,” Allen says of party officials. “They don’t respect Barb’s campaign; they don’t think that she can win the Fifth.”