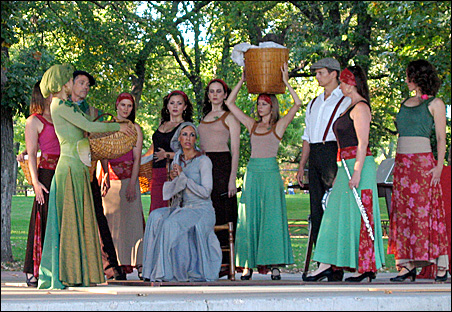 MinnPost photo by Camille LeFevre
“Romeria” dancers use small stages in the park.

The audience – led by a brightly costumed band of musicians and singers – follows the story of the neglected Yerma (Adriana Maresma Fois) and her desire for a child as the dance moves from the park’s bandshell, down the stairs to the creek, through the woods to fertility rites on a rock face and creekside, and then to Yerma and Juan’s (Tim Nunez) consummation.

It’s a work that draws power from the beautiful outdoor setting, with its intention of “honoring nature and its fertility,” as di Palma explained on the phone Tuesday before the show. As the piece winds through the park, it’s easy to experience a sense of surprise when suddenly you see performers rinsing clothes in the creek. Or your attention turns from Maria (Sachiko) seductively drumming her feet and curling her arms, to a loud rhythmic pulse behind you: a group of dancers whose riveting footwork occurs in stark contrast to the quiet lurking of the Pagan Crone (di Palma) along the edges of the crowd.

Anachronistic touches
The piece is not all vivid pink and orange costumes, fringe and flowers, fretted footwork and emotional ferocity – some of the hallmarks of flamenco as Zorongo practices the Andalusian folk tradition. There are odd anachronistic touches, as well. As the anguished Yerma, in a traditional dress of mercurial silver, paces and languishes, Juan gestures wildly while on his cell phone and ignores her while working on his laptop.

And the first pagan fertility scene – stunning staged against a rock face – includes Ted Sothern and Robert Skafte in demonic masks, and gladiatorial costumes with red codpieces. When these two – along with di Palma in horned bronze mask – join the other women, enough mojo ensues that Yerma and Juan are inspired, disappearing above the falls as the audience watches below. 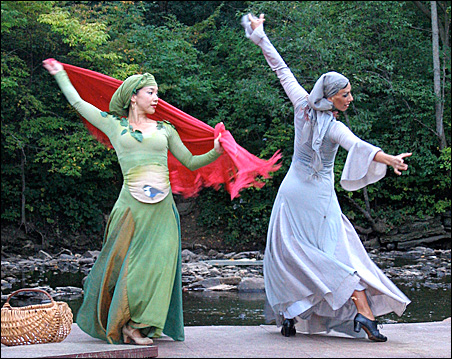 So, did it work? Will Yerma get pregnant and become a mother? If the title of part two is any indication, things don’t look good for her. But for audiences seeking to experience the earthy resonance of flamenco – amid the trickling waters, changing leaves, cool limestone and quiet paths of Minnehaha Park – “Romeria” is a meaningful way to spend the evening.