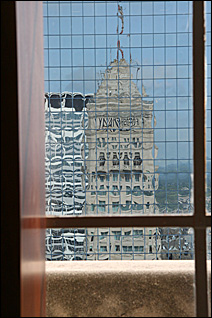 MinnPost photo by Linda Mack
Once the tallest building between Chicago and San Francisco, the Foshay Tower became a dowdy has-been. Its transformation into a W Hotel returns it to its place as a city centerpiece.

I am not sure what I expected when I walked inside the venerable Foshay Tower last week, but it wasn’t oversized black fake-fur chairs with silver legs, shimmery beaded lamps and pink light washing the lobby ceilings.

If it sounds like the new W Hotel in the landmark Foshay is carnivalesque, it’s not. It is stunning, sumptuous and sassy.

If you’d like a lesson using architecture and décor to create a world apart, spend an hour in the W soaking up the work of Munge Leung Design Associates of Toronto. It is ambience writ large.

You wouldn’t think so in the vestibule, which is unadorned but for the original ceiling light and restored molding. But step inside the long corridor and you’re not in Kansas anymore. The original gray diagonal-patterned terrazzo floors have been maintained, along with the golden marble walls. And the decorative ceiling that had been concealed above a dropped ceiling has been restored where possible and re-created where it was gone. But the claustrophobic feel is gone.

To the right is the magnetic “Living Room,” which spreads along the Marquette Avenue frontage. (Ws have their own language.) A long bar with white stools contrasts with the cushy sitting areas defined by wrought-iron dividers. The space is both grand and intimate.

It leads to the green door to Manny’s, whose red-leather café seating and photos on the wall evoke the 1930s. A black stairway behind the bar rises to the second-floor banquet and meeting rooms, which lay out nicely around an atrium to the lounge below.

Back on the main corridor, the historic storefronts showcase a more intimate sitting area and the “Whenever, Wherever” signature W concierge service. A concealed door leads to the “Speakeasy,” a dining room whose privacy is particularly delicious because it’s just off the main hall.

The stunning bronze elevator doors are still there, and the elevators whisk you to the 30th floor, where the museum has been reopened with extensive displays on the building and its idiosyncratic owner, Wilbur Foshay. From here a stairway leads to the narrow observation deck, where the original telescopes have been restored. Another W touch: You’ll be able to buy a glass of wine in the museum and take it with you to enjoy the view from the deck. The museum and deck ($8) will be open from noon to 9 p.m. after the Republican National Convention is over.

But there’s no doubt that the Foshay’s “it place” is not the deck but Wilbur Foshay’s former office on the 27th floor. Now dubbed Prohibition, the narrow, high-ceiling space is irresistible, with the original African mahogany bookcases and paneling intact and the W plush black lounges and white pleather armchairs beckoning. It’s amazing anyone leaves this bar.

All the hype about new downtown hotels in Minneapolis may have created a ho-hum attitude toward yet another hip hotel in a historic building. The W-Foshay surpasses expectations.