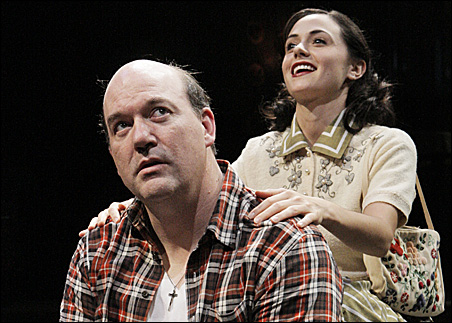 Photo by Michal Daniel
John Carroll Lynch as Eddie Carbone and Robyn Rikoon as Catherine in Arthur Miller’s “A View from the Bridge.”

Not all works by great playwrights are created equal. Often, pieces are overshadowed — fairly or unfairly — by their more famous brethren. So while most theatergoers will have seen or studied Arthur Miller’s “Death of a Salesman” or “All My Sons” or “The Crucible,” other works by the great American playwright aren’t as familiar, such as the Guthrie‘s latest production, “A View From the Bridge.”

Director Ethan McSweeny sees that as a kind of an advantage. “It’s not a play that’s studied in school,” he says. “It’s always exciting to watch a classic drama where you don’t know the ending.”

First produced in the middle 1950s as part of an evening of one acts and later expanded into a full-length show, “A View From the Bridge” finds Miller delving into familiar territory — a place where lies and secrets threaten to upset the lives of the main characters. Set amid the Italian immigrant population on Brooklyn’s Red Hook district, the play also takes its cues from the great Greek playwrights, both in subject matter (one of the secrets centers on a case of forbidden love) and in the presence of a sort-of chorus that comments on the action.

McSweeny, who has helmed a number of shows in the past for the Guthrie (including “Six Degrees of Separation” and “Romeo and Juliet”), was thrilled to work on the theater’s first-ever production of the Miller play.

Reception decidedly mixed
“I feel we are close to where we want to be,” McSweeny said last week prior to the final preview for the show. “In the rehearsal room, you make educated guesses. It’s when you get in front of an audience that you find out about the show.” (After opening, the critical reception was decidedly mixed.)

Much of Miller’s legend is built on his ability to delve deeply and honestly into the human psyche.  “Miller is aware of the corrosive nature of secrets. In ‘Bridge,’ it’s one of the oldest and most primal ones,” McSweeny says.

To represent the chorus, Miller introduces Alfieri, an attorney who serves both as a character in the play and someone who comments on the action. Guthrie veteran Richard Iglewski, faces this unusual challenge. 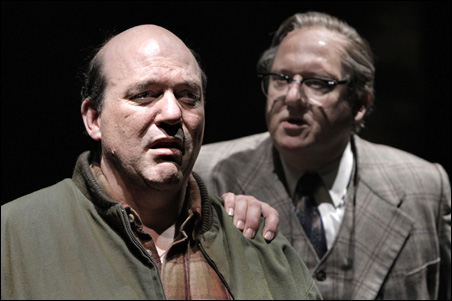 Photo by Michal Daniel
Lynch and Richard Iglewski as Alfieri.

Iglewski sees the play operating on several levels. “One of the main features of the play that resonates perfectly today is the idea of immigration. These characters have come over as illegal immigrants to get work. It’s something we are currently dealing with today,” he says. “Above and beyond that, there is a kind of personalization of a human crisis that is riveting in the play. It crosses boundaries that we are interested in seeing crossed, but wouldn’t want to cross ourselves.

“I think it represents Arthur Miller’s genius for observing the human condition and creating a piece of art,” Iglewski says. “He represents it whole and completely and poetically. There is a great deal of poetic language. There are passages that are riveted in truth and also lyrically beautiful.”

This creates interesting challenges for the actor. “It asks for a kind of romantic levelheadedness,” Iglewski says. “The hardest part about the character is making sure you are stepping far enough aside to let the chorus and the words and the narration do their job. It is really something that asks for a kind of selflessness and egolessness. I appreciate that the words are far better than any performance that I could impose on them.”