A big announcement from the Minneapolis Institute of Arts earlier today:  The museum will host an exhibition called “The Louvre and the Masterpiece” from Oct. 18, 2009, to Jan. 10, 2010.

The U.S. Bank-sponsored show will feature world-famous paintings from the Paris museum’s permanent collection, including Johannes Vermeer’s “The Astronomer” and Georges de la Tour’s “The Card-Sharp with Ace of Clubs.”

But the exhibition, which will feature 90 pieces of art from all eight of the Louvre‘s collecting areas, reaches far beyond the European masters. It will also feature “a sampling of Egyptian work as well as Islamic as well as sculpture and decorative arts,” according to Kaywin Feldman, director and president of the MIA, who was joined at this morning’s press conference by Alain Frécon, French consul general to Minneapolis,. (What’s more, the occasion called for the musical stylings of Edith Piaf to get pumped into the Target Wing of the institute.)

The exhibition’s other noteworthy pieces will include a drapery study by Leonardo da Vinci, completed when the artist was only 17 years old; “Virgin and Child With St. Anne” by Michelangelo; 14 drawings by Antonio Pisanello; the beloved Cretan limestone statuette, “Lady of Auxerre”; an ornate, gilded silver dish found near Pompeii that dates to the end of the first century, B.C.; an extremely well-crafted silver ewer by Jean-Baptiste-Jules Klagman (1810-1967) that celebrates wine and features all manner of inebriated drinkers.

None of these pieces has been seen previously in the United States. The exhibition will travel to Minneapolis after a single engagement at the High Museum of Art, in Atlanta, from Oct. 12 of this year to Sept. 6, 2009. After a run in Minneapolis, all of the art will return home. 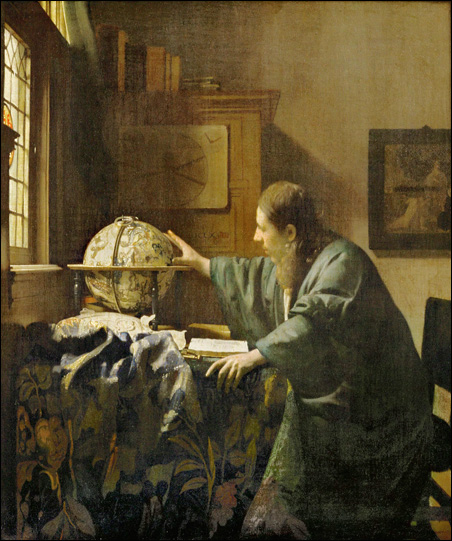 It’s worth noting: The show is not merely a hodge-podge from the Louvre’s collection. Rather, it was organized around a theme — connoisseurship, evolving tastes and, most important, the definition of a masterpiece.

To engage the audience, curators from the Musée du Louvre and the High Museum went so far as to include a few fakes — including an Egyptian glass head acquired by the Louvre in 1923. It wasn’t until 2002 that the piece, which features a woman wearing a headdress that’s peculiarly reminiscent of 1920s fashions, was deemed a phony.

With so much exciting, world-class art en route to Minneapolis, we wondered which piece most excited the museum’s new-ish director. “If I had to pick a single one, it’s definitely Vermeer’s Astronomer,” said Feldman. “But I’m a Dutch 17th-century person.  … For me, it doesn’t get much better than Vermeer.”

With love, from the Louvre