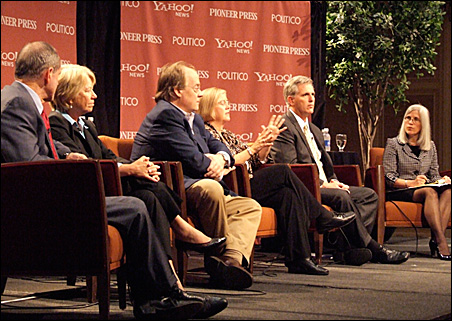 A program that was billed last week as a panel discussion titled “Women and the GOP” and featuring Alaska Gov. Sarah Palin came off this morning a bit differently than planned.

Somewhat predictably, the headliner wasn’t there. Yet the program, as it turned out, was all about her.

“Understandably, she was not able to join us,” panel moderator Beth Frerking said of the woman who became a household name Friday when John McCain selected her as his running mate. “She has been a little busy.”

But the panelists didn’t bring up the No. 1 topic in the news about the vice-presidential pick: the pregnancy of Palin’s unwed teenage daughter, Bristol.

Just one member of the audience did.

A Q&A session at the end brought a bold statement from Al Zdrazil of St. Paul. If a Democratic candidate were faced with that family situation, he said, “My perception is the Republicans would be going crazy about those issues.”

Most on the panel took issue with that perception. “I don’t agree with your premise,” Idaho Lt. Gov. Jim Risch said. “If you’re looking for perfection in any candidate you’re not going to find it.” He called Palin “an ordinary American who deals with these things.”

U.S. Rep. Deborah Pryce of Ohio called family problems an accepted fact of life. “Every family has issues and problems,” she said.

Risch and Pryce were among five Republican panelists who fielded questions from Frerking, who represented Politico.com, co-sponsor with the Pioneer Press and Yahoo.com of a series of breakfast meetings this week at the Crowne Plaza Hotel in St. Paul. Today’s gathering drew a packed house, many in the crowd sporting red T-shirts or red neckties and bulky lavaliers indicating their participation in the Republican National Convention three blocks away.

Palin drew praise from panelists for her strong image as a mother, her natural charisma, her record as a leader who has cleaned up corruption, her interest in energy issues and familiarity with oil-drilling in Alaska, which she supports. Risch of Idaho called energy “the Republican issue.” The cost of an available of energy is the biggest threat, he said, to our quality of life. “The other side doesn’t have an answer to that.”

The moderator’s questions ranged from risks and rewards for the GOP of Palin’s candidacy, challenges she faces now and how her presence in the race affects the tenor of the presidential campaign. Amid mixed responses, they all shared one observation: a burst of excitement that came with McCain’s choice of the 44-year-old Palin, a conservative and mother of five expected to become the first woman on a Republican presidential ticket.

A new buzz in the race
“She has energized the race,” said Ohio Congresswoman Pryce, self-described as a pro-choice moderate. Pryce said she believes Republican women have never been more excited than they are about Palin’s nomination. “She lives her values,” she said. “Even if you don’t agree with them, women will see that.”

Michigan Rep. Candice Miller called McCain’s choice “a game-changer.” And Mike Murphy, a political consultant who lives in Los Angeles, calls her “a Washington outsider” who represents change. “I think she’s great. You all love her, right?”

The question drew some applause.

On risks her candidacy might bring to the Republican Party: She has been relatively unknown up to now, some said. And 20 months as a governor paints her as short on experience. But Risch saw that as a possible benefit. “You look at her experience compared to Obama, and they’re comparable. I think that’s a major benefit.”

On the rewards: Rep. Kevin McCarthy, R-Calif., cites her role as a governor and one whose tenure is highly rated, he said. Because governors manage a state, “that gives them more experience than a senator.” Miller counts her authenticity. “She is who she is,” she said. “She doesn’t pretend to be anyone else.” She sees the fresh face Palin brings as a plus, too. “People really are looking for a change. Obama hit on that right away. Who really represents the change here?”

On what Palin faces now:  Doing a good job in her debate with Democratic vice-presidential candidate Joe Biden, some said. And answering a lot of questions she hasn’t had to answer before.

Kay Harvey, who writes about gender and other topics, can be reached at kharvey [at] minnpost [dot] com.