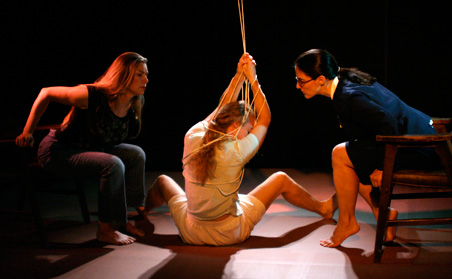 The launch into the fall dance season — or rather the plunge — begins this weekend with a once-in-a-lifetime staging of Merce Cunningham and John Cage’s “Ocean.” The sold-out performance takes place at the bottom of the Rainbow Quarry, 100 feet below the earth’s surface, with 150 musicians encircling the audience, which in turn surrounds the dancers.

In site, staging and historical consequence, “Ocean” will be a tough act to follow for the many local, national and international companies on the dockets of our dance venues this fall. Nonetheless, the following shows are on my not-to-be-missed list. Here’s why.

‘The Jury,’ Off-Leash Company
Co-founders Paul Herwig (sets, text, actor) and Jennifer Ilse (choreographer, dancer) took some political heat last spring for tackling immigration issues in a large-scale production. Artistically the sprawling work was laden with uneven performances, but also flashed with brilliance in its use of imagistic puppetry and Ilse’s terrifying performance as a coyote.

This fall, the couple returns to what they do best: creating small, intimate, transporting performances in their garage. “The Jury” is based on Ilse’s recent experience as a juror in a murder trial, using the conceit of an archeological dig to sift through the evidence. Elena Giannetti and Karla Grotting squeeze onto the tiny stage with Ilse and Herwig.

When: Oct. 3-5 and Oct. 10-12
Where: Our Garage, Minneapolis (directions with ticket reservation)
Tickets: Attendance by advance reservation only, 612-724-7372
Online: offleasharea.org

‘Dancin’ with Ethel,’ Arena Dances
I often hear people respond to news of a concert by Mathew Janczewski and his Arena Dances with a sigh: “Oh, I’m so tired of him just making pretty dances.” Well, last fall he obliterated that notion with the down and dirty “Ugly,” a grotesque work of unruly form and content that was, nonetheless, performed with commitment and — at times —abstract beauty by the dancers.

I don’t know about you, but I’m ready for some pretty again — but pretty with an edge. Will Janczewski’s new women’s duet, set to music performed live by the raucous string band Ethel, show he’s developing new paths as an artist? Will his new quartet to music by local composer Michael Croswell do the same? Definitely worth a look.

26th fall season, Zenon Dance Company
In the last 25 years I’ve missed very few Zenon concerts, in part because I don’t like traveling to New York and artistic director Linda Z. Andrews is prescient about commissioning emerging choreographers from that dance metropolis to make new work for her outstanding dancers. In this concert, the up-and-comer is Andrea Miller, artistic director of Gallim Dance, who will stage her work “I Can See You in My Pupil” with Zenon’s dancers.

Here’s a snippet of this work performed by Gallim Dance.

The other reason that I rarely miss Zenon performances is this dance troupe is incapable of disappointing audiences. Oh, there’s sometimes a piece in a program that aesthetically rubs me the wrong way; I might even loathe it. But no local dance company consistently produces such varied programs and performs with the rigor, artistry and integrity of Zenon’s dancers.

Also, do not miss Zenon’s “The Nutcracker According to Mother Goose” running Dec. 13-21, a short, sweet, hilarious production with humor that tickles both the kiddie set and their adults.

From a purely historical perspective, this work is worth seeing. It premiered in 1986, and features an all-male cast — nothing new in the modern-dance world (think Ted Shawn and His Men Dancers at Jacob’s Pillow back in the ’30s). But the work dovetailed with the AIDS crisis, which gave the work a particular resonance. Jennifer Dunning in the New York Times called the work “a visualization of the Mozart Concerto for Clarinet and Orchestra…[with] complex partnering that suggests, as do the patterns, that this is rigorously plotted joy.”