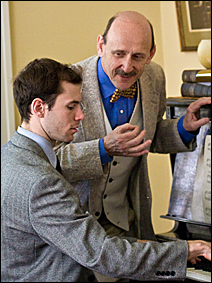 As a stage veteran with more than four decades of experience under his belt, you wouldn’t think Raye Birk would have many rehearsal jitters. Then again, he isn’t often faced with a challenge like “Old Wicked Songs,” which has the timeless and complex music of Robert Schumann at its heart.

“I’ve gone to bed with these songs in my head and I’ve woken up with them there,” he says over lunch a few days before the show’s opening. The piece marks a departure for Birk, best known in the Twin Cities for his work with the Guthrie Theater — he has played Scrooge for the last few years — in a number of ways.

The music is one, and the company is another.

“Old Wicked Songs” opens the latest season by Theatre Latte Da, which has become the local company for music-based theater. Birk will be joined on stage by Jonas Goslow in Jon Maran’s Pulitzer-Prize nominated show, which explores the relationship between an older music teacher and a young American pianist who needs help to find his musical inspiration. (Birk, however, won’t travel far to work with the new company — “Old Wicked Songs” is being staged in the Joe Dowling studio theater on the Guthrie’s top floor.)

Director Peter Rothstein auditioned half a dozen actors for the role. “Raye just has a huge range that is perfect for the role,” he says. “And he and Jonas act great together.”

Birk, whose long resume includes hundreds of plays, teaching theater and character acting turns on TV shows as diverse as “The X-Files” and “Baywatch,” looks to “Old Wicked Songs” as a fresh challenge. There’s the music, which includes singing in German and being able to convincingly act at playing the piano (the music is pre-recorded). Then there is the nature of a two-person show, which means the actors — even if not speaking — are always involved in the action.

“It’s like a ping-pong match,” Rothstein says, noting that there are only a few monologues in the entire show.

“My personal challenge is to make the character live, so the audience doesn’t know what will happen next,” Birk adds.

As shown by the choice of “Old Wicked Songs,” Theatre Latte Da stretches the definition of musical theater. “We may do a traditional musical once a year. The rest of our shows explore the connection of music and theater,” Rothstein says.

Those who would like a deeper understanding of the music that drives the play — or just want to hear Schumann performed by a top-flight singer — can attend Sunday afternoon recitals of “Dichterliebe,” featuring baritone Bradley Greenwald and pianist Sonja Thompson. What might this be like? Check out another singer’s performance of “Dichterliebe” (Poet’s Love) on YouTube (below).

The Schumann music sits at the heart of “Old Wicked Songs” and acts as a third character in the play, so a recital of the entire cycle was a natural for the production, Rothstien says.

Both Birk and Latte Da will head off to holiday shows following “Old Wicked Songs.” Latte Da presents the latest edition of “A Christmas Carole Petersen” at the Ordway, while Birk moves back downstairs at the Guthrie for his fourth run as Scrooge in “A Christmas Carol.”

In the meantime, there is Schumann and the music studio in Vienna. “A show like this is like an opera, or a train,” Rothstein says about directing it. “Once it gets going, you are not going to be able to stop it. You are just along for the ride.”