Nearly a half-century has passed since a chamber-sized orchestra cobbled together by an organization called the St. Paul Philharmonic Society gave its first performance in the auditorium of St. Paul Central High School under the direction of Leopold Sipe.

This weekend, the St. Paul Chamber Orchestra — now dressed in conservative black, thank you — will launch its 50th anniversary season. And it’s one that lives up to the orchestra’s motto: “Music on the Move.”

Physically speaking, about 12 weeks of the season are being performed in neighborhood venues around the Twin Cities. And there’s a five-day tour to Scandinavia in December. But perhaps more significant is a movement of musicians — both local and from afar.

Four-week international festival
In January, the SPCO will launch its first International Chamber Orchestra Festival, a four-week series that will feature visits to St. Paul by four other well-known chamber orchestras, one each week. These include two British ensembles: the contemporary-leaning London Sinfonietta and the period-oriented Orchestra of the Age of Enlightenment. The other guests include the multinational Chamber Orchestra of Europe and California-based Philharmonia Baroque Orchestra.

“One of the things I noticed when I came here a year ago was that visiting orchestras didn’t come through town with any regularity,” said John Mangum, the SPCO’s vice president for artistic planning. “This is a great opportunity to change that.”

Each concert in the festival will feature some works performed by the SPCO and the visiting orchestra and there will also be opportunities for the musicians from both orchestras to perform together. Mangum calls it “an element of cultural exchange.”

SPCO musicians in spotlight
Next spring, the orchestra also will spend four weeks on the romantic literature of Brahms, Mendelssohn and Schumann. Three of the programs in the series will spotlight the talents of orchestra members who will both conduct and perform as soloists. Conducting, perhaps with their bows, will be concertmaster Steven Copes, associate concertmaster Ruggero Allifranchini and principal cellist Ronald Thomas.

“We wanted to continue to focus on the great musicians in the chamber orchestra, so while there’s a lot on display during the series on romantic literature, there will soloists from the orchestra performing throughout the season,” Mangum said. “They’ll be playing concertos, solo contemporary pieces, all sorts of things.”

Indeed, there will be all sorts of things — including new stuff — during the orchestra’s anniversary season. The new things, most intriguingly, include is a work by jazz composer (and Minnesota native) Maria Schneider, who is collaborating with soprano Dawn Upshaw in what could be the highlight of Upshaw’s second season as an artistic partner with the SPCO.

The work, yet untitled, marks the first time Schneider has attempted to compose for a classical orchestra. “We’re all excited about what the piece is going to look like,” Mangum said.

Some other new works include a commissioned piece for chamber orchestra by Pulitzer Prize-winner Steven Stucky that will be unveiled in March, and the U.S. premiere of Heiner Goebbels‘ “Songs of Wars I Have Seen” that will be performed by the London Sinfonietta, the orchestra that gave the piece its world premiere.

Beethoven symphonies, concertos
It’s a bear of a season, in other words. Other highlights include scheduled performances of Beethoven’s 4th, 7th and 8th symphonies in addition to the piano concertos with Pierre-Laurent Aimard; a return appearance by violinist Leila Josefowicz; and winners from the orchestra’s own Emerging Composers Competition.

You can go here to look over the entire season. 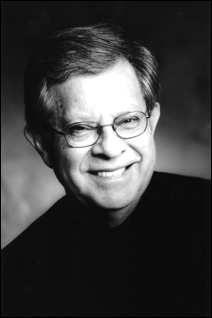 And to bring the anniversary full circle, from past to present, the season begins this weekend with the first of three visits by Dale Warland, the acclaimed choral conductor who began collaborating with the SPCO more than 35 years ago, when he organized the Dale Warland Singers.

Many lamented when Warland disbanded the choral group and retired some years ago. But for the orchestra’s 50th season, Warland agreed to organize and rehearse an ensemble — the SPCO 50th Anniversary Chorale — that will appear in three different programs.

Expect vocal fireworks
The first is this weekend and it features a spectacularly dramatic work, “Seven Last Words from the Cross,” by the Scottish composer James MacMillan. Composed in 1993, the work is roughly contemporaneous with MacMillan’s other big religiously oriented hit, “Veni, Veni, Emmanuel” for percussionist and orchestra. Those who heard the latter performed last spring as part of the Minnesota Orchestra’s bombastic percussion festival can expect an equal level of fireworks — vocal this time — from the SPCO performance.

Warland’s Anniversary Chorale also will be featured in two other programs during the season. In February, they will perform Haydn’s familiar “Creation” oratorio with Nicholas McGegan conducting, and they’ll close the season next spring with Mendelssohn’s “A Midsummer Night’s Dream” under the baton of Hans Graf.

Clearly, Warland’s association with the anniversary season is a gesture to the highlights and associations of the past. But it amounts to sentiment charged with ambition.

“We couldn’t just be retrospective,” Mangum said. “We should be taking these moments to think of where the orchestra is going as well — to interesting places with adventurous programming. That’s the heritage of his orchestra.”