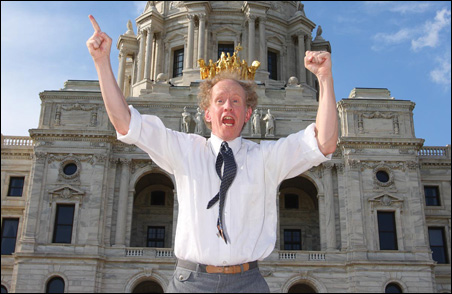 Stepping into famous shoes can be daunting for any actor. Doing that with a person whose life and death were intertwined with Minnesota culture and politics is even more so. Mark Rosenwinkel does this starting Tuesday (Sept. 2) as he takes on the lead role in “Wellstone!”

The musical exploration of Paul Wellstone’s public and private life, with its triumphs and tragedies, runs for three weeks at the Sabes Jewish Community Center in Minneapolis. The production follows up a successful run of the show at the History Theatre in 2006.

Rosenwinkel, who crafted the show with composer and lyricist Larry Long (who also appears in the show), was attracted by the full scope of the Wellstone story — both personally and politically.

”The Wellstone story was compelling because of the larger tragedy it encompassed,” Rosenwinkel says. ”It wasn’t just a well-loved couple that went down that day. It was like something died within the hearts of a lot of people — the idea of government for ordinary people.

Paul Wellstone‘s story, especially as a political outsider whose stunning upset win in 1990 set the stage for 12 years of iconoclastic politics, is a deep vein to mine for a play. The play follows his 19-year political career, which tragically ended in 2002 when a chartered plane crashed in northern Minnesota, killing the senator, his wife Sheila, their daughter Marcia and several others, just weeks shy of the election for his third term in the Senate.

”The main difficulty in bringing it to stage was the huge emotional stakes that were involved. The events were so easily given over into sentiment. I didn’t want the sense that we were manipulating feelings, yet I wanted to celebrate the joy of Paul’s life amid all of the struggle,” Rosenwinkel said. ”A lot of the play, as I’m now discovering while acting in it, is Paul fighting — often fighting hopeless battles. It’s a challenge to present that in a way that resonates with the audience.”

Challenges
As a writer, Rosenwinkel had to follow his own interests to tell a story far broader than the scope of a single play.

”I had to write about the Wellstone that I was interested in, and hoped that it resonated with others,” Rosenwinkel says. ”The friends of Paul and Sheila can go to the play and know they aren’t seeing the real people. But I am proud that those that saw the show felt I was faithful to his spirit. As an actor, too, I can’t be thinking so much about the voice and gestures, although some of that is important. I’ve got to find the same spirit inside of me, because that’s what an audience wants to watch for an hour and a half.”

The production at the Sabes Jewish Community Center is part of that facility’s arts program. The idea in bringing in “Wellstone!” was not to promote one political ideology over another, but ”to learn more about the man,” says Stuart Wachts, the center’s chief executive director. ”We wanted to explore who he was and how he took the positions that he did, as a Jew and as a Jewish politician.” 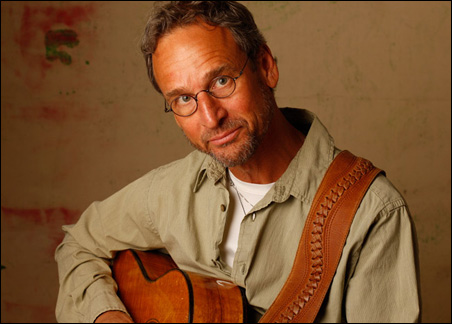 The arts programming serves as an important component of the center’s mission. ”We want to be a center for Jews to learn about their background and the general public to be entertained and learn about Jewish culture,” he said.

The exploration for ”Wellstone!” goes beyond the performances. There will be an opening night pre-show panel discussion and a trio of post-show discussions with the artists. All of this will help to put Wellstone’s legacy in a greater context, Wachts says.

Wide influence
Rosenwinkel found that Wellstone’s influence and personal connections ran the gamut of people in the state.

”What surprised me most was how much (ownership) various groups took over Wellstone’s legacy,” Rosenwinkel says. ”Almost everybody had a story about Wellstone appearing at a union rally, or at some kind of neighborhood event, often sparsely attended. Various ethnic groups, labor groups, and other constituencies spoke as if he was their personal friend. The Hmong community comes to mind, but that love was repeated over and over again, and in a very personal way. It is surprising for a public figure to be so personally and genuinely loved.”

The script and score have not changed since the show’s initial run in 2006 at the History Theatre. ”I saw little reason to change it, as the production worked very well,” Rosenwinkel says. ”We have a different cast, new set and new director, so it has a completely different energy. It’s more raucous, I think, which is good.”

The timing of the show ¬ opening on the second day of the Republican National Convention is not coincidental. ”It’s a very political time in the Twin Cities and the United States, so producing this is great for audience development,” Wachts says. ”People, be they liberals, conservatives, Democrats, Republicans or Independents, can come and be engaged and entertained.”

Rosenwinkel is a bit more succinct:

”We want to sell tickets! Republicans, Democrats, we’ll take them all!”

A tall order: telling the Wellstone story on stage