The teenage years aren’t life’s only tough time of transition. Ask any member of The Transition Network (TTN), a nationwide organization of almost 4,000 women in their mid-40s to age 80-plus who are helping one another to get what they want in the next stage of their lives.

One of them is Charlotte Frank, TTN’s co-founder and a Minneapolis native who considers herself typical in a growing sisterhood of women who want to re-imagine – and reinvent – what they see as a tired model of retirement.

The time was right for her to leave a stimulating career in government service, she says. The big question: What next? After years of satisfying work, “you’re in a certain groove,” she says. “You know you need to replace it with something. You just don’t know what.”

She did know that a life of leisure wouldn’t be the answer, Frank writes in the foreword of TTN’s new book published this summer, “Smart Women Don’t Retire – They Break Free” (Springboard Press, New York).  Like other women in the network, Frank looked to retirement as an opportunity to continue being productive and experiencing a challenge – one similar to that in the workplace.

She knew, too, that finding that mix after retirement could be a challenge. That’s where TTN comes in, she says, to approach it as a multifaceted new life experience each woman creates for herself. “Exercise your creativity and take up painting,” she suggests. “Volunteer. Do pro bono work using your skills. Get a part-time job. Explore the pleasures of family and travel. You can do it all. You can be on boards and build your own community. You’re in a new groove.” 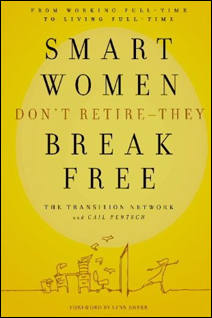 A peer group for everywoman
It’s not their mother’s game plan. “There’s no road map, no ground rules” for these women who spent the last 30 years changing women’s roles at home and at work, says Frank, who graduated from the University of Minnesota before heading eastward. In her last job as director of procurement programs at the city level for the Port Authority of New York and New Jersey, she helped get the agency back on its feet after its offices were destroyed in the 9/11 terrorist attacks. “What we’re saying (about retirement) is take a risk. Do things you wouldn’t ordinarily do.”

TTN’s key building blocks are 10-member peer groups that provide an intimate base for women to explore common interests and explore how they want to move on. At first focused on renewing careers, launching businesses and preparing for retirement, peer groups have since expanded to whatever their members want to talk about. That ranges from books, writing and travel to widowhood, dealing with a retired partner, exploring creativity, volunteering and foreign affairs. Some create salons to take up social issues from racism to legacy.

TTN chapters are flourishing in the San Francisco Bay area, Denver, Houston, Chicago, Boston, New York City, Long Island, Westchester, N.Y., and Washington, DC. Though some interest has been expressed, none has sprung up yet in the Twin Cities, Frank says.

Creating community
In peer groups, friendships blossom. And much more, she says. “Women are helping each other when something bad happens. What we’re doing now is extending the concept of community.” The New York City chapter’s Caring Collaborative pools TTN members to help others with chores, transportation and at times of crisis to foster independent living. The grant-funded project is a prototype that could be replicated in other TTN locales.

Now heading the collaborative, Frank is still piecing together her challenging retirement. She’s also on TTN’s board, enjoys an active social life, frequents New York City theater performances and travels a lot. That’s not all. Her next project: “I’m going to develop the right side of my brain.” In her youth, she studied acting. “Who knows?” she says. “That might lead full circle.”